At last, the long-awaited civilian version of the ARX-160 assault rifle, the Beretta ARX-100 semi-automatic rifle, will hit the U.S. market in August!

In the year 2008, Fabbrica d'Armi Pietro Beretta S.p.A. of Gardone Val Trompia (Italy), one of the world's biggest, most ancient and most famous gunmakers, launched a new and revolutionary assault rifle platform, dubbed the ARX-160. Based upon a full polymer chassis and a short-stroke piston-driven working system, the ARX-160 sports incredible reliability and modularity features, and was adopted outright by the Italian Armed Forces as a perspective replacement for the older 70/90 rifles and carbines; it also gained global popularity and sales with military units and special forces in several Countries; in the United States, it was purchased by several local, State and Federal law enforcement agencies, and was submitted to the U.S. Army Individual Carbine program.

The system also spawned two specialized short-barrel variants for special applications (ARX-160 SF and ARX-160 PDW) and a 7.62x39mm conversion, and last year it was first seen in a civilian sporting variant, albeit chambered in .22-Long Rifle, much for the expectations of the sports shooters community that has been longing for a "full-caliber" civilian variant ever since.

At last, Beretta answered the call at the 142nd NRA Annual Meetings & Exhibits that took place earlier in May in Houston (Texas). Beretta U.S.A. − the north-American branch of the Italian parent company, headquartered in Accokeek (Maryland) − will in fact start shipments of the ARX-100 in August. The ARX-100 is a semi-automatic only, purely civilian variant of the ARX-160 assault rifle platform, featuring a wide array of sporting-oriented changes to the system without compromising its faithfulness to the original.

Beretta U.S.A. Corp.
The ARX-100 retains the modular features of the ARX-160 assault rifle, including the quick-change barrel system

The ARX-100 will feature the same piston-driven system as the ARX-160, of course duly modified to prevent select-fire operation or reconversion, and it will be incompatible with the specific parts of the ARX-160 that would allow full-automatic fire. It will be chambered in .223-Remington (5.56x45mm), feeding through standard STANAG 4159 magazines; it will feature the very same ARX-160 full polymer lower and upper receivers, with tri-railed handguard and a long top MIL-STD-1913 "Picatinny" rail for optics and flip-up backup iron sights. It will also feature the same sidefolding/extensible stock and ambidextrous controls as the ARX-160, with a twist coming directly from the ARX-160A1/SF and PDW variants: the stock is of the "strenghtened" type, specifically conceived to be used as an emergency tool, and controls have been partially reconfigured so that two new magazine catch and hold-open release buttons are placed exactly in the same position as they are in the AR-15/M16/M4-series rifles and carbines. This means that thee shooters who are already proficient with the quintessentially American "Black Rifle" will have no problem in quickly getting accustomed with the new Beretta ARX-100. 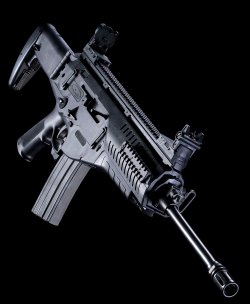 Beretta U.S.A. Corp.
Distribution will start in August in the United States - Europe will have to wait at least until 2014

The ARX-100 also maintains the ARX-160's quick-change barrel feature, although the 12-inch barrel produced for the military versions will not be made available to the general public: the commercial market will instead be given a "standard" 16-inch barrel and a longer, 20-inch barrel to choose from.

The Beretta ARX-100 will be launched on the U.S. market next summer at a manufacturer's suggested retail price of approximately 1950.00US$, with the company strongly encouraging retailers not to raise the price tag any further, being well aware of the fact that excessive prices are what's been killing the ARX-100's most direct competitors in the field of modern, modular sporting rifles, more precisely Bushmaster's ACR and FNH-USA's SCAR-16S and SCAR-17S. If the price remains stable, Beretta can certainly expect a huge market success. Bad news instead come for European shooters, who will have to wait at least until the very beginning of 2014 before having a chance to purchase the ARX-100. The first batches will in fact be made directly in the United States, and importing these in Europe would definitely result in a rise in prices; on the other hand, the company couldn't sell these in the United States if they were solely made in Italy, as they would be illegal to import under 922(r) provisions. Thus, Beretta kindly asks all friends in Europe to be patient while things get geared up for the "Old Continent": it's coming nonetheless!