Astra Defense, the new products for the year 2016

IWA 2016 /  New from Astra Defense: the MG556 semi-automatic rifle and the SL-203 accessory 12-gauge shotgun were on display in Nuremberg 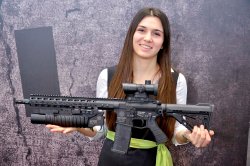 The Astra Defense company also showcased the SL-203 undercarried single-shot 12-gauge shotgun, developed as a breaching device to be installed as an accessory on assault rifles and carbines

The Swiss-based Astra Defense company – hosted at the 2016 edition of the IWA OutdoorClassics expo by its Italian distributor, the Prima Armi group – showcased its new products conceived for law enforcement and civilian shooters alike.

Despite its look, the MG556 is a semi-automatic sport shooting rifle, soon to be available on the European commercial markets. Soon to be available as a civilian-grade version of the FN MINIMI light machinegun, it sports a totally redesigned trigger group and closed bolt working system that makes it incapable to be converted in any way to full-automatic. The belt-feeding tray is a mock-up: the .223 Remington (5,56x45mm) caliber MG556 only feeds through detachable STANAG magazines, and sports a un underfolding bipod and a folding metal buttstock.

The SL-203 underbarrel shotgun was instead developed specifically for military and law enforcement users, and is already being deployed by otherwise unspecified units in the American continent. Conceived to be easy to use by operators who are already familiar with the 40mm M-203 grenade launcher, the SL-203 fires 70mm/2.¾” 12-gauge shotshells – both lethal and less-lethal – and is meant to be used as a breaching device or to incapacitate culprits before capture.

Subscribe to the Newsletter
This article is also available in this language:
IT
Click here for more information on the topics:
Rifles.223 RemingtonIWASemiautomatic riflesSport Shooting