We are going to deal with an AR-15, M16 and M4 rifle and carbine platform problem known as “Front Sight Base Cant”, or FSB  Canting, and how to correct it

It may happen with brand new AR platform rifles, or rifles that have been just rebarreled: at the first attempt to zero the rifle’s iron sights on the range, either the windage is almost maxed out or it may be just plain impossible to zero the firearm because there is no more windage left. 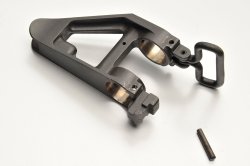 Franco Palamaro
A typical AR-15/M-4 Front Sight Base, mounted on the rifle barrel with tapered pins

There may be two reasons for this problem. First of all, excessive play between the barrel’s indexing pin and the indexing pin slot machined in the upper receiver may lead to the barrel extension “slipping” and rotating, following the barrel nut during assembly. What happens is that the whole barrel assembly is axially tilted and therefore the front sight post is not mechanically in a “neutral zero” above the barrel.

The second reason deals with an incorrectly installed front sight base. This is a much more complex problem to solve, since the front sight base and the barrel are assembled and drilled simultaneously and in severe cases it may be simpler to just return the rifle to the manufacturer for repair.

If the rifle is second hand, or it has been assembled from parts, in both cases the FSB cant problem can be corrected in many ways, provided we are willing to tinker a bit and we have available the basic tools to service an AR15 platform rifle: a good jaw vise, an AR Upper Vise Block adapter, and an AR Barrel Nut Combo Wrench.

Check whether the rifle has a crowned barrel, or an easily removable muzzle device; in this case, the easiest way is to simply remove the stock FSB by tapping out both tapered pins and sliding the FSB off the barrel, purchase a clamp-on front sight base, which uses either set screws or nuts to fasten it to the barrel, and proceed to mount it indexing both the sight base and the upper to the barrel.

This can be accomplished by securing the barreled upper on a jaw vise, then drawing with a black marker a straight line across a sheet of paper, and using a level, mount it perfectly vertical opposite to the bench on which our vise and upper is located, so that we are able to boresight the line looking through the barrel from the breech.

Once the barrel is aligned to the line, we can carefully index the upper receiver rear sight and the front sight base so that all three are aligned, and then tighten the set screws or nuts while checking that everything is still lined up once done.

If the barrel has a permanently mounted muzzle device, either press assembled or welded on, and the  cant is slight, i.e. the windage is almost maxed out or zero is only a few clicks away, we can attempt to correct it by loosening the barrel nut and reindexing it with the upper receiver. To do this, we remove the handguards and gas tube and we mount the upper on a vise, as if we were rebarreling it. Then, we will loosen the barrel nut and proceed to align the barrel, the upper receiver rear sight and the front sight base so that all three are aligned, as explained above, and carefully retighten the barrel nut until proper torque is reached, having care to maintain everything lined up. The operation is much easier with a friend assisting.