The Thales international group, founded in France in the year 2000 and world leader in the defense industry sector ever since, started its small arms program in 2006 after purchasing from the Australian government the majority shareholding of ADI ‒ Australian Defence Industries, Ltd., the Countryʼs own military industries corporation, which had been manufacturing guns for the military since World War 1 at the Small Arms Factory in Lithgow (New South Wales) ‒ the same establishment that signed in the 1980s a license agreement with the Austrian Steyr-Mannlicher GmbH company to manufacture a variant of the Steyr AUG, dubbed the “F-88 AuSTEYR”, for the armed forces of Australia and New Zealand. Lithgow/ADI engineers first, and more recently the Thales Australia researchers, have put great effort in modernizing the Steyr AUG platform to meet the ever-increasing needs and requirements of the Australian Defence Forces as their deployment in Afghanistan and Iraq became more and more challenging. Between 2011 and 2012, a new and greatly enhanced version of the F-88 “AuSTEYR”, dubbed the EF-88, was developed by Thales Australia under the LAND 125 Soldier Combat System (formerly “Project WUNDURRA”), the Australian future soldier project; the EF-88 was developed in a joint-venture with Steyr-Mannlicher, which allowed to overcome the contract limitations of the first licensing agreements and to push the capabilities of the Steyr AUG to levels of modernity and effectiveness never met since it was first launched in 1977. Thus, by the 2012 edition of the EUROSATORY defence expo that took place during the second week of June in Paris, France, the Thales group was ready to showcase the commercial/export version of the EF-88. 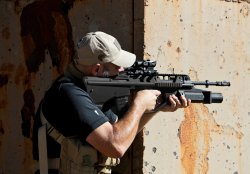 Thales Group
The Thales F-90 is configured to be a highly modular weapon, available with three different barrel lenghts, and compatible with mostly any COTS/MOTS accessory available on the market today

Dubbed the F-90, this new assault rifle retains the “hell-and-back reliable” working system and technical layout of the Steyr AUG, is chambered for the 5,56x45mm-NATO cartridge and uses AUG magazines. Controls layout also remains the same, with the two-stage trigger dubbing as a fire selector (half-way pull for semi-automatic fire, full pressure for full-automatic fire), yet the F-90 features the same two-positions safety push-button found on the Australian F-88 “AuSTEYR” rifle: while the original Steyr AUG only has a one-position manual safety, in the F-88 series and in the F-90 it also features a secondary “automatic lockout” stage that will physically disable the full-automatic fire mode. The Thales F-90 assault rifle is built on two receivers, just like the Austrian AUG. The lower receiver is molded out of high-strenght, high-technology carbon fiber-reinforced advanced polymer, featuring a raised cheekpiece and an enlarged trigger guard. The machined aluminum upper receiver features a long MIL-STD-1913 “Picatinny” rail for optics on top, two shorter accessory rails on the sides and a fourth one located in front of the trigger guard. The F-90 features ejection ports on both sides, but adaptation to left-handed fire can be achieved only through the installation of a special bolt group, just like with the original Steyr AUG.

Thales Group
One of the accessories developed by Thales specifically for the F-90 assault rifle is a quick attach-detach, undercarried, single-shot, side-opening 40mm grenade launcher with quadrant sight

The Thales F-90 assault rifle will be available in three different variants, vith an average weight ranging from 7 lbs. to 9.5 lbs. depending from the version: the standard model will feature a 16" barrel, while the F-90M (for “Marksman”) will feature a 20” barrel and the SpecOps-oriented F-90CQB will have a 14” barrel; all barrels will be cold hammer forged, chrome-lined, and pretty much akin to the standard Steyr AUG fluted barrel type, with birdcage flash hider and a 1:7in. rifling pitch; the F-90 Standard and F-90M variants will also be capable to fit a specially-designed, single-shot 40x46mm-SR grenade launcher with quick attach-detach capabilities and a side-opening barrel for both less-lethal, crowd-control ammunition and hyper-lethal/high-effectiveness special loads. The grenade launcher features a double action trigger which, when mounted, will find itself inside trigger guard of the rifle through a hole in its front part, this meaning that the shooter wonʼt need to change holding position when firing the launcher but will merely have to bring the index finger from the rifle trigger to the grenade launcher trigger.

Other variants of the F-90 system will follow in the long term, yet the goal for the Thales Group in the near future will be to push the F-90 rifle to pursue specific opportunities, such as the French DGA FAMAS replacement project, taking advantage of Steyr-Mannlicher’s manufacturing experience and facilities.