The KRISS ARMS Group will launch the new K-10 multicaliber, modular sub-machinegun within this year - just a new step in the path to a totally new weapons system!

A contribution from Pierangelo Tendas05/07/2013 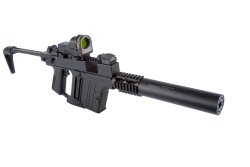 The VECTOR-SMG sub-machinegun, also known as the "Super-V" or "TDI Vector", was first launched in 2006 by TDI - Transformational Defense Industries Inc., now known as KRISS-USA and a subsidiary of the Swiss-based KRISS ARMS Group, also owner of a well-known Swiss pistol-making company, Sphinx Systems Ltd., and distributor of the DEFIANCE line of silencers. A locked-breech, recoil-operated sub-machinegun firing the .45 ACP round at 1200 rounds per minute, the VECTOR-SMG is based upon a patented energy-revectoring system, housed in front of the magazine well, that will keep recoil and muzzle climb to minimum levels even when the gun is fired in full-auto − so much, in fact, that it's even hard to say that the gun is actually in .45 caliber. And yet, the VECTOR-SMG also sports a very peculiar design that's been a little bit hard for some operators to get accustomed to. Several customers thus submitted their feedback to KRISS Systems, and the company analyzed them in an almost two-years-long process which appears to be close to a conclusion right now.

The updated and simplified version of the VECTOR-SMG, dubbed the K-10, that was first showcased two years ago at the SHOT Show and once again last year at the IWA show in Nuremberg (Germany) is in fact slated to enter production and distribution before the end of 2013. The K-10 represents KRISS' effort to make the VECTOR-SMG simpler to both manufacture − so to reduce per-unit costs − and operate; featuring a polymer lower receiver and a machined aluminium alloy upper, the KRISS K-10 differs from the earlier versions under several points of view. Its pistol grip has been slightly redesigned, while the stock has been changed from a polymer side-folding to a metal wire collapsing model; the fire selector, which the VECTOR-SMG has separated from the manual safety, is now ambidextrous and is also the sole switch on the upper receiver of the gun itself, featuring three positions for safe, semi-automatic and full-automatic fire. The cocking handle, located in front of the trigger guard on both sides of the recoil-vectoring mechanism housing, has also been redesigned for different, improved handling − it's now made to move downside and then up again rather than rearwards and then forward − to make it more instinctive to operate while keeping the K-10 in firing position or while raising it to aim at a target. Last, the magazine catch button has been made more prominent.

The KRISS K-10 SMG retains all the technical features and working principles of the VECTOR-SMG, and yet it sports a slightly longer barrel whose front end is encased in a quad MIL-STD-1913 "Picatinny" rail interface, adding up to the long upper optics rail. Plus, while the VECTOR-SMG was only offered in .45 ACP, the new K-10 will be multicaliber and modular, meaning that it may be converted from .45 to 9x19mm or .40 Smith & Wesson through field-stripping and replacement of certain components. The new SMG will still use Glock magazines, whose capacity, definitely too low for a sub-machinegun firing that fast, will be enhanced to thirty rounds for all calibers through the use of KRISS' own "MagEx G30" extension. Hopefully, the launch of the K-10, which is slated to take place before the end of the year, will be just the first step on the road towards a totally new KRISS weapons system that will include a select-fire pistol (the KARD), a 12-gauge combat shotgun, a high-caliber assault/battle rifle and a .50-caliber heavy machinegun, all of them based on the KRISS-patented energy-vectoring system that's been dubbed "the most important advancement in firearms technology in over 120 years".