Headquartered in the town of Whitefish, Montana (U.S.A.), and part of the Mission Arms Group, the Intrepid Tactical Solutions company was basically unknown until the 2013 edition of the SHOT Show, that took place last January. A surprise awaited the visitors that stopped by the company's defiladed booth in the halls of the Sands Expo & Convention Center in Las Vegas: a new, AR10-based semi-automatic shotgun system and a purpose-developed, proprietary 12-gauge ammunition type in the final prototype stage, ready to be marketed to civilian, military and law enforcement customers. Dubbed the RAS-12, the system has reached its final stages now, and the Intrepid Tactical Solutions company announced that the month of June 2013 should see the commercial launch of both the weapon platform and its proprietary round in the United States.

Intrepid Tactical Solutions - a part of the Mission Arms Group
Alternatively, the AS-12 upper receiver alone can be purchased and installed on the user's own AR-10 lower receiver

From a merely technical standpoint, the centerpiece of the RAS-12 shotgun is its upper receiver, dubbed the "AS-12"; fully forged in 7075-T6 aluminium alloy, the AS-12 upper receiver features a monolythic (a.k.a. integral) free-float railed handguard and a top MIL-STD-1913 "Picatinny" rail for flip-up iron sights and other optical devices. The AS-12 upper receiver also features a proprietary, shotgun-grade AR10-style bolt group and an adjustable gas piston for operation. The 18.1-inch 4140 steel smoothbore barrel also features a machined aluminium "Scorpion" muzzle brake for breaching duties. Through its two-pin rapid deployment system, the AS-12 bolt can be installed on any AR-10 rifle lower receiver that features an SR-25 magazine well; the manufacturing company suggests DPMS lowers for the purpose, as they offer a great quality level for one of the lowest prices on the market. An additional part − most notably a sturdier, shotgun-grade recoil buffer, as the RAS-12 shotgun system uses a different recoil spring to deal with the added energy of shotgun loads − must also be installed in the buffer tube in order to make the RAS-12 platform work properly.

As standard as it all may seem, the RAS-12 changes when it comes to a ballistic standpoint. As a matter of fact, everybody knows the main drawbacks of magazine-fed shotguns based on a non-standard shotgun bolt: first of all, detachable magazines with a capacity larger than six shells must be long and feature a prominent curve in order to accomodate standard plastic shells with a standard; rimmed brass or otherwise metal head. But most important, the rim itself may get stuck in the ejection window as the bolt closes, causing a jamming. The RAS-12 solves by not being compatible with standard 12-gauge shotshells. As a matter of fact, the RAS-12 uses a proprietary 12-gauge shell, with a full polymer rebated, rimless case and a polymer "bullet" acting as a sabot for eleven 00-buckshots. The RAS-12 shell is visually similar to a size-reduced 40mm grenade, and it may as well have been engineered so, in order to exploit the "superior" ballistics of these round nose-cone shells. Shape and dimensions of the shell have also been designed so that they will stack vertically in the RAS-12's proprietary detachable, polymer-made 8-shots magazine, in order to reduce overall lenght and width. 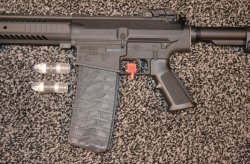 As of today, Intrepid Tactical Solutions is the sole source of both the RAS-12 shotgun (or AS-12 upper receiver) and the RAS-12 proprietary ammunition on the global market, either for civilian or professional (Military/LE) sales; a list of authorized U.S. dealers is maintained on the company website. As stated above, the RAS-12 system is slated to hit the market by June, with the US first. The manufacturer's suggested retail price for the RAS-12 shotgun tops $1950.00, including an AS-12 upper receiver, a proprietary recoil spring, and one magazine. The ammunition will sell for $300.00 a case, each holding up to 100 proprietary RAS-12 shotshells. Prices for the ammunition are probably bound to remain steep as long as Intrepid Tactical Solutions will remain the sole source for these shells, although the company is in talks right now with a major − and so far unnamed − US-based ammo maker to start large-scale production and distribution of the RAS-12 shotshells; interestingly enough, it was said ammo maker to approach the Intrepid Tactical Solutions company, and not the other way around. Either way, the success of the demise of the RAS-12 system definitely hangs from the outcome of these talks, as only the mass production for the proprietary shells may give the RAS-12 a chance for commercial diffusion. In the meanwhile, Intrepid Tactical Solutions is working to develop the RAS-12 system even further: rifled barrels for slugs are on their way, as well as integral choke barrels. 16-gauge and .410-gauge versions, based on AR-15 lower receivers, are also been prototyped.