The worldʼs first functional double-barrel tactical carbine is made in Israel: the “GILBOA Snake” astounds the attendance at the EUROSATORY 2012!

SSASS - Silver Shadow Advanced Security Systems, Ltd. is an Israeli company whose business has long time been focused basically on active and passive protection systems against explosions and other terrorist-related threats. A few years ago, the company launched on the market its own line of firearms, including a Galil-based 7.62x51mm-NATO sniper rifle dubbed the “TIMNA” and an entire line of AR15-based rifles and carbines in 5.56x45mm, 7.62x39mm and 7.62x51mm calibers named the “GILBOA”, somewhat similar to the products offered by the US-based RRA - Rock River Arms group. The “GILBOA” rifles are realized out of solid billet machining, and are offered on both civilian and professional (Mil/LE) markets; several batches have already been exported, and feedback by military and police operators and by sports shooters alike all reports excellent quality and performances. 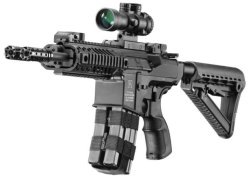 SSASS has been showcasing its whole line at the EUROSATORY 2012 defense expo in Paris (France) during the second week of June, and the attendance has been impressed and astonished by its latest variant, already “snooped” on the Internet a couple of weeks ago, yet by far the most unusual AR-15 variant ever seen. SSASS' new product, named the “GILBOA Snake”, is in fact the first truly functional tactical double-barrel carbine, available in both semi-automatic or select-fire variants, with both-sides ejection system and a proprietary open-breech firing system.

Silver Shadow Advanced Security Systems, Ltd.
This odd double-barrel 5,56mm carbine is a strictly tactical-professional product that aims to conquer a place in the inventories of Special Forces and other Military/LE customers

The “GILBOA Snake” double-barrel carbine is built around two double-sized receivers (upper and lower), basically hosting two independent AR15-based carbines with 9.5-inch barrels, kept together like siamese twins by a very small number of parts, namely the trigger group and the bolt carrier. The “GILBOA Snake” features a single trigger and sear, and each pull of the trigger will cause both barrels to fire, either in semi-automatic mode or in full-automatic fire at a ROF of approximately 700 rounds per minute. The two twin barrels are 3 centimeters apart from the center of the bore, and the trigger group operates a proprietary bolt carrier that synchronizes the firing using two separate bolts firing at a fraction of second from one another: the first bullet will exit the left barrel, followed by the second bullet exiting the right barrel. The fraction of second delay is imperceptible, yet it will cause a balancing effect that will assist the operator to achieve a better control of the weapon even in select-fire/full-automatic mode. The “GILBOA Snake” carbine feeds through standard STANAG 4179 magazines, held in pairs in a double magazine well, each of which will feed one single barrel. The unique piston operated cocking mechanism exploits the returning gas to ensure a flawless cycle under any condition.

Commercial availability of the “GILBOA Snake” has not been slated yet, albeit distribution within the military and law enforcement markets should start as soon as orders are placed. The peculiar technical layout of this weapon, even in its semi-automatic version, should however close all doors to a possible civilian market distribution in most, if not all, jurisdictions.