FN Herstal introduces the MINIMI Mk3: the latest generation of the world's most common light machinegun will be available in 5.56x45mm and 7.62x51mm variants!

A contribution from Pierangelo Tendas01/02/2014 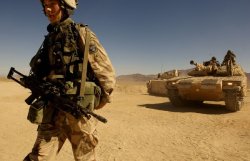 U.S. Army - Staff Sgt. Samuel Rogers - DSN 574-4822/2144
The FN MINIMI and all variants and license-built versions thereof are currently in service in over 45 Countries worldwide

First conceived in the mid-1970s and first manufactured in the early-to-mid-1980s, the MINIMI ("Mini-Mitrailleuse") belt-fed light machinegun from Belgian FN Herstal S.A. has since been the paradygm and the benchmark by which all other squad automatic weapons have been judged.

Conceived in a time when most, if not all, platoon support weapons were chambered in 7.62x51mm-NATO and required a two- or three-men team to carry (a designated machine-gunner plus two more soldiers to carry extra ammunition and a heavy tripod), it proved that a light machinegun could be manufactured and fielded that would require only one man to carry and operate.

The FN MINIMI also launched the main tendence of having squad support weapons chambered for the 5.56x45mm caliber which the U.S. Armed Forces had already adopted in the late 1960s but that was hardly gaining full acceptance with the rest of NATO, thus definitely speeding up the standardization procedure for the new cartridge.

FN Herstal S.A.
The Mk3 represents the latest generation of the FN Minimi, the world's most iconic squad automatic weapon

The FN MINIMI was not the first lightweight, portable 5.56x45mm light machinegun to ever see the light of the day − belt-fed versions of the Stoner 63 had been around for a while, and at the same time the Singaporean CIS was working on the ULTIMAX-100 − but it was the first one to become anything more than a niche or special services weapon, gaining full acceptance between standard military units and special operations forces in over 45 Countries − including the United States, where it's known as the M249 SAW.

More recently, specialized variants and models in 7.62x51mm-NATO caliber − a round that's been regaining widespread acceptance between military operators for a while now, considering its superior performances in range, accuracy, and lethality − were also manufactured, as a further demonstration of the versatility of the FN MINIMI platform, which remains maneuverable and easy to use even when chambered for a higher caliber.

Now, about thirty years after its birth, the FN Herstal company introduces a new generation of the MINIMI platform, whose first samples were showcased last November at the MILIPOL 2013 expo in Paris.

Dubbed the MINIMI Mk3, it features a plethora of modifications that were the result of feedback provided by users engaged in current operating theatres. Indeed, the demands of users have evolved over the past 10 to 15 years due to changes in the way the FN MINIMI machine gun is used in combat (increased use of accessories, evolutions in the soldier’s equipment, and changes in tactics such as shooting from all positions). The new FN MINIMI Mk3 offers the users improved ergonomics and improved mobility while retaining the same core mechanism as the previous versions, for a limited impact on logistics.

FN Herstal S.A.
As the needs of asymmetric warfare call for more powerful squad automatic weapons, FN will offer the Minimi Mk3 in 7.62x51mm as well

Available in a "Tactical LB" (long-barrel) and "Tactical SB" (short-barrel) variant, and in either 5.56x45mm or 7.62x51mm calibers, the FN MINIMI Mk3 features an ergonomic buttstock adjustable in length (5 positions) to allow compensation for body armor and load bearing equipment. The buttstock is adjustable for cheek rest height as well. The user can have his eye correctly aligned with the iron sights, or optical sights, while keeping his cheek properly positioned on the buttstock. It also integrates a folding shoulder rest and a hydraulic buffer that stabilizes the rate of fire and reduces felt recoil.

If necessary, the stock can be replaced with the swiveling/collapsing metal stock already found on the "Para" or SPW versions of the FN MINIMI, which were conceived for APC or airborne troops and proved so far to be an excellent compromise between portability and stability.

FN Herstal S.A.
The 7.62x51mm version of the Minimi Mk3 is also available in a short-barreled variant

The FN MINIMI Mk3 also comes with a new handguard/bipod assembly that provides a comfortable handguard and three forward MIL-STD-1913 "Picatinny" accessory rails. The adjustable-height (3 positions) bipod, when folded back, integrates into the shape of the handguard even with an accessory on the lower rail.

An ergonomically-shaped cocking handle has also been added to provide the user a better grip with the strong or weak hand.
More importantly, the FN MINIMI Mk3 comes with an improved feed tray, featuring belt retaining pawls that hold the belt correctly in position during the loading procedure and allows single-handed reload and eases the procedure particularly when the user is in the standing position.

Plus, an optional heatshield greatly reduces the risk of inadvertently touching the barrel, and a convertibility system allows the FN MINIMI Mk3 7.62x51mm variant to be reverted to the use of 5.56x45mm ammunition.

FN Herstal S.A.
Any pre-existing FN Minimi variant can be upgraded to Mk3 specs through the replacement of some components

Customers with 5.56mm or 7.62mm FN MINIMI machine guns and variants already in service are not left behind. FN Herstal offers them a customized upgrade program to upgrade partially or completely their weapons: adapted to their exact needs and easily carried out by the armorer on site using the supporting documentation provided with the conversion kits.

FN Herstal’s technical experts are also available to help the customer make the right choice among the various conversion kits or accompany him during the converting operations. The conversion of a pre-existing FN MINIMI variant to Mk3 specification will take only a couple of minutes to a skilled or purposely-trained armorer, and will ensure combat viability of the weapon for years to come.

The MINIMI Mk3 is not just another attempt to keep an old battle horse on the field for "just a little bit more".

During the years, the MINIMI platform, in all its variants, clearly demonstrated to be the best possible alternative in the field of belt-fed, light-caliber squad automatic weapons.

Until a quantum leap in firearms or ammunition technology will make it hopelessly updated, it's clear that it will keep serving military forces worldwide in all conditions.

With the Mk3 variant, technicians and engineers at FN Herstal S.A. made sure for present and future MINIMI operators that their squad automatic weapon will remain effective and cutting-edge for as long as it will remain in line.