Currently, the British classic Webley MK VI service revolver is celebrating its return - but it does not come in .455 caliber centerfire cartridges as it did in the early 20th century. Now it is a CO2 version and shoots .177/4.5 mm pellets. all4shooters.com took a look at the new air gun.

Webley revolvers are like the Sleeping Beauty: both are waiting for someone to kiss them awake – what the prince would be to the sleeping damsel, the Webleys would be to collectors. After all, the family of these large-caliber top-break revolvers from Webley was the service weapon of the British Army for almost six decades. They set the standard for reliability and reloading. The first speedloaders, for example, by William de Courcy Prideaux were made for these revolvers. No one could resist the argument of the 265-grain bullet. Eventually, these guns – as well as their successor already introduced in 1932, the Enfield No. 2 MKI – had to give way to the FN High Power semi-automatic pistol introduced under the designation L9A1.

But now the story of the classic service gun is taking another turn: Birmingham-based Webley & Scott is offering a new CO2 version of the Webley MK VI. This version – that in many European countries can be purchased by anyone who is at least 18 years old – is available with both a 12-groove rifled barrel to fire .177/4.5 mm flat-head pellets and with a smooth bore barrel for shooting the round projectiles known as BBs, one 177/4.5 mm steel or .22/6 mm nylon. 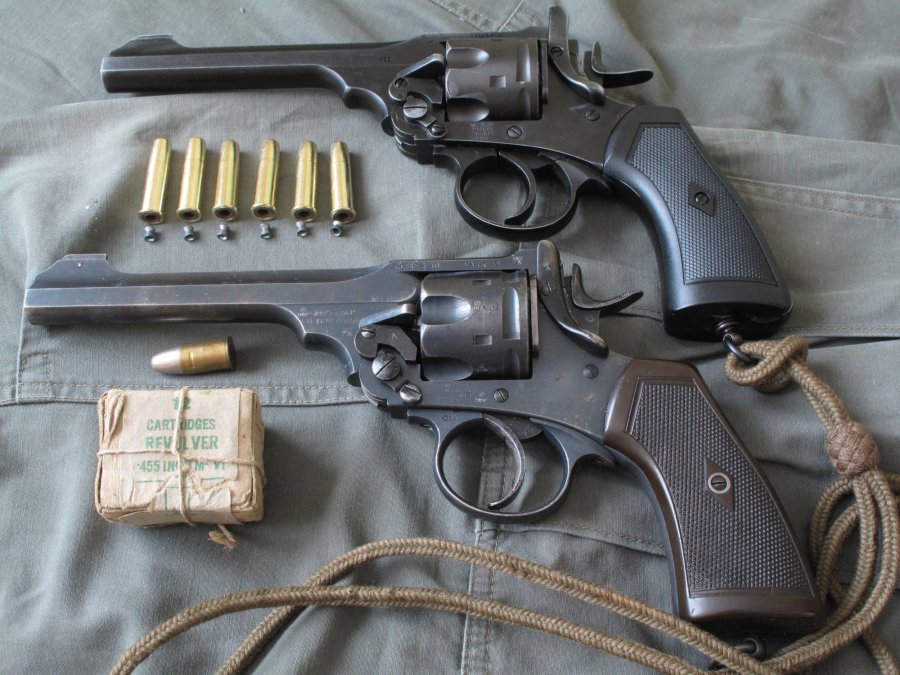 Webley & Scott is following up on something that started more than eleven decades ago: in February 19, 1910, the ingenious William Whiting, Webley's  pistols and revolvers chief designer, received patent 4213 for an air gun. Initially, there was not much interest. In 1920, however, the British government passed the Firearm Act, which made it very difficult for private individuals to purchase firearms. Suddenly, the demand for air guns exploded. Webley recognized the opportunity and pushed ahead with the manufacture of air handguns and air rifles. Now, starting in 1923, engineers Douglas V. Johnstone and John W. Fearn devised a new air pistol. They used Whiting's compression principle and Frank Clarke's push-barrel system. Patent 219872 of August 7, 1924, marked the beginning of the success of the Webley & Scott Mark I. Improved countless times since then, air pistols were constantly in the company's catalog even after the end of revolver production on September 7, 1979, thus ensuring the survival of this traditional British manufacturer.

The test gun: what's in it? 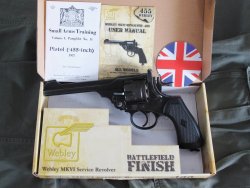 Stephan Rudloff
The CO2-Webley comes in an imaginatively decorated cardboard box. A warranty certificate and operating instructions are also included in it.

"I am a self-confessed Webley fan" – this is the phrase used by one of the testers to describe himself. And who was therefore pleasantly surprised when he held the attractively designed box in his hand. "Webley MK VI Battlefield Finish" was written on it. That's what it was supposed to be, because the latest Webley was to join its battle-scarred brother from the first series of 1915. Printed on the back of the box was also a list of movies and computer games in which the revolver appears. None of us had imagined its acting career to be so extensive. But of course, in the British Empire there was always a conflict at some corner, and from 1915 the MK VI was there. Opening the box, there lay the instruction manual. Understandably structured, with drawings where necessary, already good. Then a round slip of paper with the Union Jack on the front and the warranty notice on the back. And a reprint of the last official instruction manual for the MK VI from 1937. A nice – and interesting – addition, showing how over 80 years ago the soldier was taught to shoot with the revolver, at that time also from horseback. 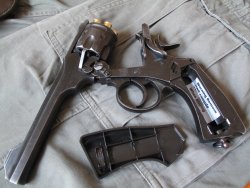 Stephan Rudloff
The CO2 cartridge of the Webley MK VI sits in the grip frame. Its compartment can be accessed by simply pulling the spring-loaded left grip off the frame.

Now for the revolver. It looks good with its deep black finish. It shows fine machining marks on the barrel and frame, like the original. That was also finely finished in the military model. The finish is the same as that of guns reworked after 1918. Originally, weapons of this type were dark blue in color. On the CO2 version, a magnet test confirms it is a zinc die-cast, as expected. A discreet ".455" is stamped on the left side of the barrel assembly above the pivot hinge. This is the original caliber and does not belong there. The original had no caliber designation, every British soldier knew that this type of gun fired the army cartridge. In rare cases, the designation ".450/.455" was stamped on request. This was to indicate that the revolver could also fire the .450 black powder cartridge.

On the left front of the frame of the CO2 version is the oval "Webley MK VI Patents 1915" marking – as on the original. Not present are the numerous service weapon acceptance marks. The left side of the frame bridge is emblazoned "MARK VI". On the right side, the caliber and the serial number. All of this would be better placed more discreetly, for example on the underside of the barrel. What you have to live with, however, is the small slide at the front of the frame. It shows a red or white dot depending on the position. This is actually a safety. Not true to the original, but cleverly done.

Technology: how the CO2 revolver from Webley works

A look at the cylinder shows that there are cartridge cases inside. So press the lock lever, known as the "Stirrup Latch", against the pressure of the V-blade spring on the right side. Now the gun can be broken open. A cam moves the ejector star upwards and ejects the cartridge cases. Everything is the same as on the original, except for the shape and size of the cases. To be more precise, of course, these are not cartridge cases, but magazine shells, which are used to fire the respective projectile (here: .177/4.5 mm pellets). Now cock the hammer. The distinctive original firing pin is missing. Of course, it has to be because it merely actuates the valve, which releases a small amount of CO2 to propel the pellet or BB. Screwed into the frame from behind, it shines brass-colored. Where is the CO2 cartridge? Correct, in the grip. The left grip plate can be removed for this purpose. It is spring-loaded and clamped. The grip frame has a small bulge at the bottom where a finger can be inserted to open it. Insert the CO2 cartridge, press it against the valve by means of the rotating lanyard ring, and pierce the seal. The revolver is now ready for use.
Basically, it's not easy to build a gas revolver that works reliably. Sure, there are some weak points due to the system. The biggest problem is the seal between the front of the cylinder and the barrel entrance. How was this solved in the CO2 MK VI? The magazine shell does not correspond to the design of the original cartridge case. Otherwise, the projectile would have free flight, which is associated with gas loss. The shell therefore extends over the entire length of the cylinder and has sealing rings at the front and rear. 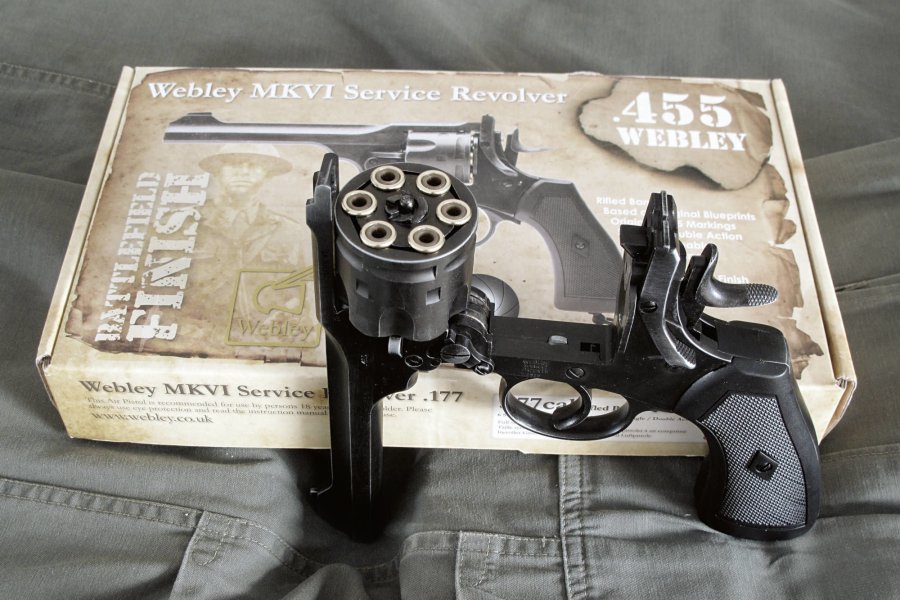 Stephan Rudloff
Loading provides a classic Webley feeling: you operate the stirrup lever on the left side of the frame and break open the barrel and cylinder. 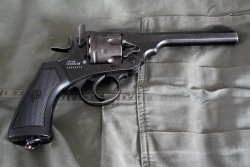 Stephan Rudloff
The 6-shot CO2 revolver from Webley shows itself to be a solid replica of the classic.

The rear one seals against the valve, the front one against the barrel. Speaking of the barrel, what looks like the typical MK VI barrel from the outside is more correctly a barrel jacket, inside which a barrel that is about 0.39”/10 mm shorter is at work. This is necessary because it moves back and forth. This revolver features in fact something else – something that is as useful as it is historic: a gas-tight seal, once invented by Henri Pieper from Liège, patented by the brothers Léon and Émile Nagant, who also worked in Liège, and which has since become world-famous, for example in the Russian Nagant revolver. There the cylinder advances and the conical mouth of the chamber at the top slips over its counterpart on the barrel. The mouth of the cartridge completes the gas seal. Because of the rear seal to the valve, here the cylinder cannot be pushed forward over the barrel end. For this reason, the barrel is spring-mounted and pinned. When the cylinder rotates, the barrel under spring pressure is pushed forward into the mouth of the next cylinder chamber. This is as ingenious as Pieper's idea 125 years ago, but can only function at low gas pressure.
The aforementioned safety acts on the trigger via the cylinder stop and reliably blocks it as well as the hammer. 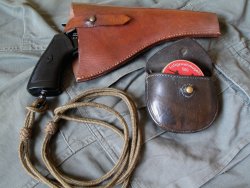 Stephan Rudloff
The revolver also looks good with the original lanyard and in an open NCO holster with a buttoned strap. The pellets fit in the Pattern
1908 cartridge pouch.

Loaded, the gun weighs about 2.4 lb/1100 g, about the same as the original. The trigger characteristics are also about the same, with the double action proving to be military heavy. Unlike the original, the trigger breaks very quickly. The single-action trigger turns out to be very comfortable and only creeps minimally. Hits within the 8 ring, but also in the 9 and 10 rings were achieved at a distance of ten meters. Testers fired between 40 and 50 rounds with the 12-gram CO2 cartridge. Important: be sure to lightly grease the sealing rings to minimize wear and thus gas loss. The CO2 MK VI is certainly not a match gun. But like its older brother, it does more than well in a steady hand. Above all, it is a lot of fun. And it belongs in every Webley collection, because it is a worthy conclusion of this historical series. The CO2 Webley is available in black blued, chrome-plated and Battlefield finish. That's what everyone liked best. And its older brother also enjoyed being in the family photos with it. Made in Taiwan to a high quality, the gun costs 209.95 euros (price may be different in your country).

Test conclusion and our wishes for the Webley revolver

What remains are some wishes to the manufacturer to make the revolver even more authentic: please put the printed identification marks in a more inconspicuous place. Use slightly thicker material for the grip plates. Make the screw on the the cylinder takedown lever larger and with the slot in coin width. Blacken the back of the valve. If the die cast molds ever need to be replaced, add to the molds the two mounting screws in the trigger guard and the screw on the front sight as well. Mold the rear sight to match the original one – at the moment it replicates the rear sight blade retrofitted in the 1970's on many decommissioned Webleys by British dealers. And then add the original dark blue finish as an option – with all this it would be perfect for our testers!

But nevertheless: a clear buy recommendation for all fans. What you get here for just over 200 euros is worth the price.

For more information on the CO2 revolver please visit the Webley & Scott website.

Subscribe to the Newsletter
This article is also available in this language:
DE
Click here for more information on the topics:
Webley & ScottPistols 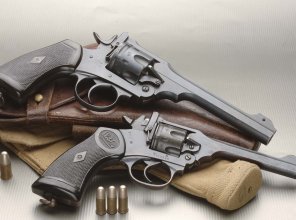