Will this radically-designed rimfire pistol really turn out to become “The future of fun”?

The Hartford (Connecticut) ‒ based U.S. Firearms Manufacturing Company, Inc., has up to date been known to the general public mainly, if not solely, for its single-action, “Old West” ‒ style revolvers, available in a wide array of calibers, often as custom realizations and... at a price. Itʼs thus no wonder if the companyʼs new offering on the firearm market, so radical and innovative in design, caused so much hype between gun enthusiasts and bloggers in the U.S. and abroad, with the first leaked footage of firing prototypes being initially labeled as a fabrication. 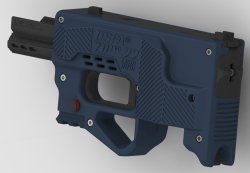 Unconventional under almost all points of view, exception made maybe only for its .22 Long Rifle chambering and its straight blowback operation (albeit heavily modified into what has been renamed the “ZiP-Action” by the manufacturing house), USFAʼs new semi-automatic rimfire pistol, named the “ZiP.22”, delivers what the company describes as “a long sought after vision of X-Box gamers and advanced weapon enthusiasts not possible until now”. Conceived more like a modular weapon system than a simple pistol, the “ZiP.22” feeds through the 10-rounds BX-1 and 25-rounds BX-25 manufactured by Ruger for their utmostly popular 10/22 carbine. 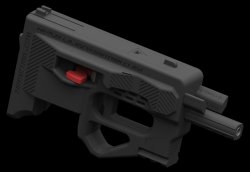 U.S. Firearms Mfg. Co., Inc.
The U.S. Firearms “ZiP.22” pistol is radical in design and concept, and aims to appeal the “X-Box Generation”!

The “ZiP.22” pistol is built around a full polymer body, with aluminium parts, and features a steel 5.25” barrel, whose chamber sits right on top of the magazine well, allowing for a mere 5.9” overall lenght. Featuring a simple single-action trigger, the “ZiP.22” pistol departs from all standards in terms of design, featuring five safeties, including a traditional cross-bolt trigger safety, a new modern sear safety improved by the development of a new linear trigger, and no winding trigger bar (also eliminating any dependency on the tiny coil spring in the rear of those dated striker designs) and lastly, a striker block which remains closed for nearly all of the trigger travel ‒ opposite of all modern striker-fired pistols ‒ making the "ZiP.22" one of the most advanced platforms ever offered.

The “ZiP.22” pistol also features great accessories compatibility: a short MIL-STD-1913 “Picatinny” rail is located under the trigger guard, and while the pistol comes out-of-the-box with black fixed sights, a wide range of factory-made, accessory add-on rail interfaces can be quickly installed on top of the “ZiP.22” to allow attachment of optical sights and other devices. 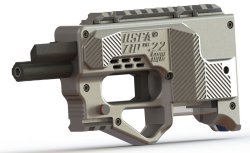 U.S. Firearms Mfg. Co., Inc.
USFA will provide a series of aftermarket rails to interface the “ZiP.22” with all sorts of tactical accessories

The USFA “ZiP.22” design provides no external slide, being the gun rather manually cocked via two parallel bars located on top of the barrel which need to be pushed rearwards, right inside the frame, and then released to operate. The two bars actually have two distinct functions: the left bar is the cocking bar, and is operated to chamber the first round and arm the striker to fire the first shot; the right bar is dubbed the “ReStrike Bar”, and will only re-cock the striker to attempt a second strike on the chambered round should it ever fail to fire. In the event of a second failure to fire, due maybe to a defective round which is unsafe to keep in the gun, the chamber shall be cleared by operating the cocking bar.

USFAʼs first promotional video slated the release of the “ZiP.22” for Fall 2012 − it will instead be available for early 2013, although pre-orders are already possible 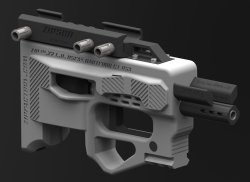 U.S. Firearms Mfg. Co., Inc.
A peculiar accessory rail, dubbed the “ZiPSBR”, also allows the installation of the “ZiP.22” pistol as an ancillary for rifles, shotguns or carbines

The peculiar design of the USFA “ZiP.22” thus calls for peculiar handling procedures, as well as for a peculiar grip, and in fact the manufacturing company developed a quite unique way to hold this quite unique pistol, with the dominant hand grabbing the whole polymer body from the rear, keeping the middle finger inside the provided space located right under the trigger guard, and the weak hand sustaining it. Other techniques may also be experimented − the quite low recoil of the .22 Long Rifle cartridge will provide for excellent controllability under most, if not all, situations. The user should however be aware of the fact that the magazine release lever is located on the rear heel of what should be the “grip” of the USFA “ZiP.22”, and that thus all stances must be adopted keeping in mind that such an important control has to be both easy and quick to reach and operate and protected from accidental release − a highly unlikely event, giving how the magazine release catch is protected by two polymer wings. All correct handling procedures and firing stances for the “ZiP.22” pistol are described in detail in the user manual that comes with the pistol and that's already available for download in an edited-down form.

U.S. Firearms Mfg. Co., Inc.
Conceived as a fully modular weapon system, the “ZiP.22” can be converted into a survival carbine through the use of a multipurpose stock

USFA engineers also developed a nifty add-on to the "ZiP.22" pistol − the core itself of the design “modularity”, we should say − in the shape of the “BattleZiP” multipurpose stock. A totally polymer chassis itself, the “BattleZiP” dubs as an SBR stock and as a mean for safe storage and transportaton of the “ZiP.22” pistol. A rear slot, protected by two removable plastic covers, provides plenty of storage space for the pistol itself, while two lower slots of the stock allow two loaded magazines (one BX-1 and one BX-25) to be carried along for quick availability. The “BattleZiP” stock also features a top Picatinny rail, and side slots for additional ones to be installed.

U.S. Firearms Mfg. Co., Inc.
Installation of the “BattleZiP” stock will turn the “ZiP.22” pistol into an NFA-controlled item as a short-barrel rifle in the U.S., while it will remain feasible without legal complications elsewhere

The “ZiP.22” pistol can be installed on the “BattleZiP” stock in two ways: with the barrel pointing rearways, in the so-called “Transport” position; and with the barrel pointing frontally, in the “Survival Carbine” (ready to fire) position. Mounting the “ZiP.22” pistol on the “BattleZiP” stock requires the use of a special, aftermarket add-on interface manufactured by USFA (dubbed the “ZiPPic”), and U.S. shooters should be aware of the fact that this will turn their “ZiP.22” pistol into an SBR (Short-Barrel Rifle), a firearm category that falls under the provisions of the 1934 National Firearms Act, requiring the user to obtain an SBR permit and to previously register his/her “ZiP.22” pistol as an SBR through ATF Form 1 before attaching it to the “BattleZiP” stock. Same goes for those who may want to try and use another add-on interface, the “ZiPSBR”, to turn their “ZiP.22” pistol into an undercarried ancillary for other firearms. Users in Europe and other Countries should inquire about the legal feasibility of attaching the “ZiP.22” to a rifle or carbine, while it remains perfectly legal for shooters mostly everywhere outside the U.S. to attach/detach the pistol to the “BattleZiP” stock at will and to fire it as an SBR without complications or legal hassle. 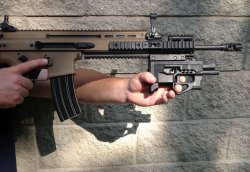 U.S. Firearms Mfg. Co., Inc.
The use of the “ZiP.22” pistol as an ancillary weapon for full-caliber, centerfire rifles or carbines is also possible, although NFA-regulated in the U.S.

The USFA “ZiP.22” pistol will be commercially available in January 2013, although retailers and distributors can already order it − same goes for the “BattleZiP” stock and all accessory rails. The “ZiP.22” pistol will be officially introduced to the public at the 2013 SHOT Show, next January 15-18 at the Sands Expo & Convention Center in Las Vegas, NV. The manufacturerʼs suggested retail price appears very enticing, not exceeding 200.00US$ for the “ZiP.22” pistol itself in either black, blue, “Alien Grey” or “Tan” variants. Pricing for the “BattleZiP” stock and for interface rails havenʼt been announced yet, but some sources state that the stock itself shouldnʼt go for over 120.00US$. all4shooters.com will of course keep you posted about this interesting new entry in firearms, so stay tuned!