Tanfoglio introduces a new line of "Force" pistols factory-equipped with threaded barrels for sound suppressors, to answer the needs of Police and Military special operations and tactical teams 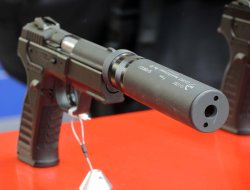 all4shooters.com
The new Tanfoglio "Force" pistols specifically built for Mil/LE customers feature a factory-threaded barrel for silencers and either a polymer or a steel frame

Over 30 years have passed since the Fratelli Tanfoglio gun factory − headquartered in Gardone Val Trompia, the heart itself of the Italian arms industry − launched its first modern, high-capacity semi-automatic pistol.

Known as the TZ-75, TA-90, GT-21, and in many other ways depending from the local markets and distributors, Tanfoglio's pistol was a honestly built knockoff of the then extremely rare and sought-after Czechoslovakian-made CZ-75. Nonetheless, it was the beginning of a new era for the Company, as it represented a full launch in the "Wondernines" market, appealing civilian shooters and professional operators alike in the whole world.

Now, over three decades later, Tanfoglio doesn't copy CZ anymore: it's CZ that started an advantageous cooperation trend with the Italian company, which helped modernize the Czech's pistols line that was quite a bit backward-looking by the time the Cold War ended.

Truth is: Tanfoglio was the company that, more than any other, helped the CZ-75 platform to reach the pinnacles of modernity and versatility it's now known for. Tanfoglio has also been the first ever Italian company to launch a mass-production line of polymer-frame semi-automatic pistols, known as the Force in Europe, as the EAA Witness-P in North America; the Tanfoglio "Force" line was also taken as a basis by other companies such as LUVO and ALFA-PROJ in the Czech Republic and Armscor in the Philippines to develop their own ČZ-TT, "Combat", "Defender" and MAPP pistols. 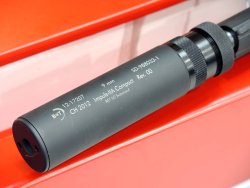 Ever since it was first launched in 1997 − with the current modernized variants having been launched from 1999 to all through the 2000 decade − Tanfoglio's "Force" line of semi-automatic pistols became an instant top seller worldwide.

Much like the stable and sturdy metal frames of other Tanfoglio's pistols made them highly regarded particularly between competition shooters, the polymer frame of the "Force" line pistols allowed lower weight and increased ease and comfort in both open and concealed carry to these local Police officers, private security operators and average civilians looking for a viable and yet utterly reliable semi-automatic pistol for service and defense. Available in all the most popular calibers, ranging from 9mm to .40 and .45 up to 10mm, the Tanfoglio "Force" pistols are available in full-size and compact variants, and may come with two different safety configurations and either with or without a tactical railed frame.

Today, the Tanfoglio "Force" semi-automatic pistol line is one of the world's most sought-after alternatives to higher-priced products offered by other well-known American and European brands. Versions in .380 Acp, .22 Long Rifle, .38 Super Auto, 9x21mm-IMI, and traumatic cartridge (rubber bullet) versions were also developed for sale in these Countries with stricter laws governing civilian availability of handguns or certain calibers. 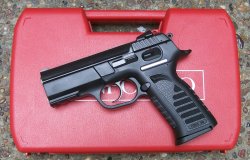 all4shooters.com
Tanfoglio's "Force" line is still a best seller between local Police agencies in Europe and worldwide, as well as between civilian shooters and private security companies

The latest chapter in the lucky history of Tanfoglio's "Force" pistols line was unveiled at the 2013 edition of the MILIPOL expo of military and police weaponries, equipments and technologies, which took place at the Villepinte exhibition center in Paris last 19/22 November.

Following requests from several law enforcement agencies that adopted the "Force" pistols worldwide over the years, Tanfoglio launched a special-purposes version of the platform, featuring a factory-threaded barrel that will readily accept a sound suppressor.

The development is new for Tanfoglio in that special operations teams using the "Force" line of pistols had − up to now − to purchase aftermarket third-party threaded barrels to equip their pistols with silencers or sound suppressors. Now, the same operators will be able to fit their Tanfoglio "Force" issue handguns with the best available silencers − Tanfoglio warmly suggests the Swiss-made Brügger & Thomet products, available in a plethora of caliber-specific variants − for those high-stake situations where accuracy is paramount and remaining stealthy is vital for success and to save human lives.

It's still not clear whether or not Tanfoglio will also distribute their own threaded barrels as an aftermarket accessory to authorized entities; should they decided to go that way, Tanfoglio's "Force" pistols already issued to Police and military units may be quickly adapted − either at depot level or by operators themselves − to suit the needs of special operation forces.

The special-purpose variants of Tanfoglio's "Force" pistol line will come with either a steel or a polymer frame, either with or without a tactical MIL-STD-1913 "Picatinny" rail for tactical accessories, and will be available in two safety system configurations: one featuring a standard frame safety switch for "Condition One" carry, one coming with a double slide-mounted switch and including a hammer decocking lever for "Condition Two" carry − full magazine, chambered round, hammer down − this being the best possible way to carry a SA/DA external-hammer pistol for service or defense purposes.