The Slovak gunmaker Grand Power, known for various "short carbine" models, introduces the smallest version of the series, the Stribog SP9 A3S in 9mm caliber with a 4.5”/114 cm barrel. We test fired it at the shooting range.

Technically the Stribog SP9 A3S is a semiautomatic pistol with folding stock, featuring a very short 4.5”/114 mm barrel to which, in order to reduce muzzle flip, a muzzle brake/flash hider with upper and side vents has been added – the device surely helps also to compensate the recoil of this compact gun. 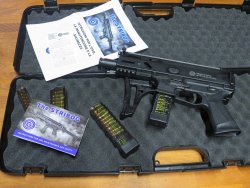 The Stribog comes with two magazines and a hard case in addition to the instruction and maintenance booklet.

The  SP9 A3S can is composed of three main assemblies: a metal upper receiver, where we have the bolt assembly, recoil springs and barrel – the latter is fixed to the receiver; a polymer lower receiver hinged to the upper, where we find the trigger assembly, grip, magwell and hold open; a rear assembly composed of the polymeric compound stock that can be folded on the right side by simply pressing a special button. When folded, the stock is parallel to the gun axis thanks to a stud placed at the end of the butt pad, preventing any contact with the frame.

On the left side, where the stock connects to the gun's frame there is also an attachment for a single point sling, so that the gun can be carried easily and more comfortably. The charging handle is proportionate to the gun and can be easily swapped on both sides. It is non reciprocating, which means that when firing the gun us much more stable than the previous versions.

The Stribog SP9 A3S under the magnifying glass 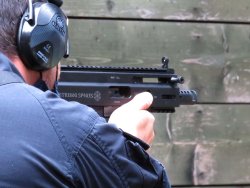 The charging handle is wide and reversible, in this case, it has been swapped to the right for a left-handed shooter. Sights are very clear.

Safety: the manual safety is ambidextrous, it does not engage if the hammer is not cocked. We found that safety activation is instinctive, while disengagement must be "decisive", because when the safety is on, the lever is vertical and to be disengaged it must be rotated backwards to a horizontal position. In the versions designed for some foreign countries, the manual safety is also a fire selector that allows to switch from semi-automatic to full auto mode – this way the Stribog becomes a submachine gun.

Rails: the gun has a Picatinny rail along the whole upper top, while a smaller rail is placed under the barrel for the mounting of flashlights and/or lasers.

Sights: there are two polymer sets of sights. The Stribog SR9 A3S cal.9x21 has an aperture rear sight and a white dot front sight, both of which can be flipped down. It is precisely in such flipped down position that the gun reveals a small notch rear sight and a small black front sight that instinctively direct the shooter towards the target to be engaged even when there is no time to flip the sights up and reaction times can make the difference.

Grip areas: the pistol grip is polymer and is hollow inside to save weight. It features a good texture that makes it easier to purchase. A similar texture can be found on the magwell that acts as a grip area for the other hand.

Feeding: the magwell is well designed and allows for a quick magazine change. Feeding is provided by transparent polycarbonate magazines, which in the case of the Stribog SP9 A3S can hold 20 cartridges in 9mm caliber. The gun, however, also accepts other magazines from earlier sporting models than the SP9 A3S. Being transparent, the magazine allows you to immediately see the number of rounds remaining, also thanks to the markings on the right side indicating the number of cartridges available – 10, 15 and 20. The Stribog SR9 A3S comes with two 20-round magazines.

Other features: along the metal frame of the Stribog SR9 A3S there are lightening and cooling cuts. The trigger is clean with little pre-travel, the gun feels particularly manageable and smooth when firing.

During the test firing the only anomaly during over 600 rounds fired was that, with some 20-round magazines, the feeding of the third last shot was problematic. Probably because of the magazine spring, or because of the cartridge position. This causes the cartridge to impact the roof of the chamber at an angle and the case to became wedged by the bolt, that in the chambering phase is moving forward with great force. The failure to feed is easy to solve by re-cocking the charging handle and tilting the gun to the right, so that the cartridge falls down. Releasing the charging handle, the next rounds is then chambered and the firing action can be resumed. 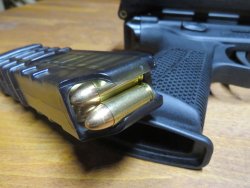 The lips of the magazine, being made of polymer, are somewhat delicate if they hit hard surfaces, e.g. when accidentally releasing the magazine.

The submachine gun appearance makes the Stribog particularly attractive, aggressive in form and concrete in its features. For those who need a different gun from the classic pistol for self-defense, the SR9 A3S is a firearm that certainly provides a strong deterrent. in addition to a high fire capacity. Accuracy is enhanced by an easy-to-use stock. Weight is small, considering the type of firearm, and even more so the gun's overall size with folded stock, which makes it easy to carry concealed.

Thanks to its small size, even with the stock deployed the gun is easy to use and  to point even in confined spaces, buildings and vehicles. The Stribog SP9 A3S presents itself as a pistol that in case of need becomes a short carbine in an absolutely effective caliber. The external and internal features of the Stribog SP9 A3S can be appreciated in specialized law enforcement use too. 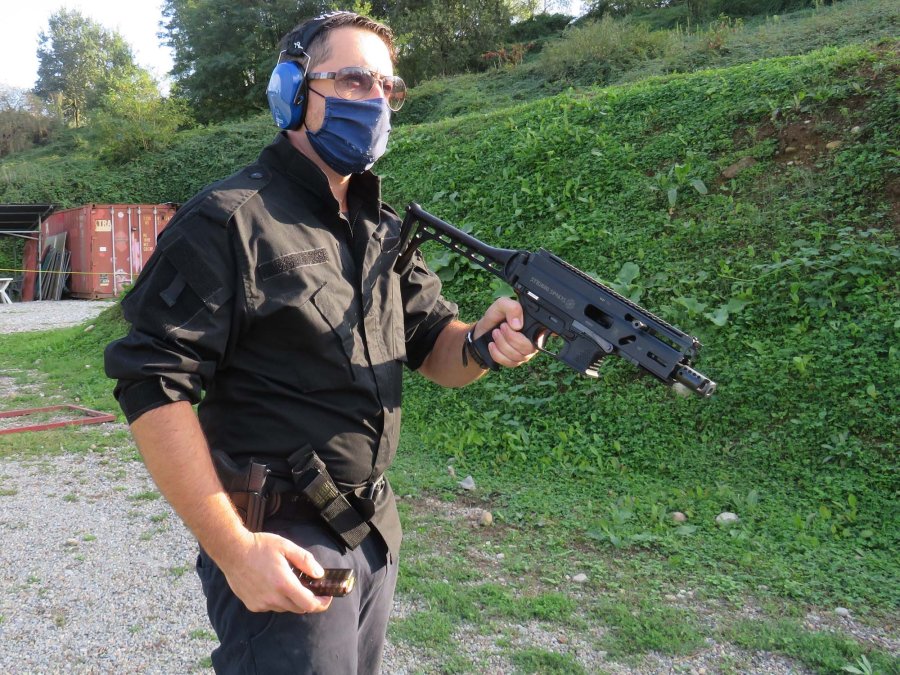 Its very compact size and technical features make it an interesting gun for law enforcement too.

The Stribog SP9 A3S on the shooting range

During the test firing the gun achieved very good results also in terms of accuracy. For the tests we fired about 600 rounds between commercial and reloaded cartridges, with bullets of various weights including full metal jacketed, copper and lead projectiles from various brands. The Stribog SP9 A3S in 9mm caliber did not show any type of malfunction or jamming caused by the ammunition, with consistent accuracy – also considering the small length of the barrel and the type of gun. Even when dumping the entire 20-round magazine in instinctive fast shooting it is impossible to miss the target, since the gun's behavior is quite manageable even by novice shooters.

Subscribe to the Newsletter
This article is also available in this language:
IT
Click here for more information on the topics:
PistolsLaw EnforcementPro-zone9 mm9x19 mm (9 Luger)Test
That might interest you too: