A contribution from Pierangelo Tendas12/18/2013 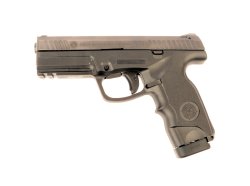 Looking back, this the ideal ending point of a lenghty renewal phase for Steyr-Mannlicher GmbH − one of the world's most notorious gun manufacturers, headquartered in the Austrian town of Kleinraming − and perhaps it paves the way for yet another one.

Just like many other important international gunmakers, by the end of the 20th Century the Steyr-Mannlicher company suffered from the lack of dynamism of the gun market, and was thus stuck on a somewhat outdated product line.
Its signature product − the AUG Bull-Pup rifle design, available both as a select-fire Military/LE firearm and a semi-automatic civilian carbine − had merely been upgraded with Picatinny interfaces, but was otherwise stuck to the standards of the late 1970s, when it had first been fielded.

Steyr's TMP rotating-barrel sub-machinegun was a spawing from the abortive individual weapons modernization programmes attempted by the U.S. Military at the end of the 1990s, and there was little or no request for it on the market; its semi-automatic civilian version (the SPP pistol), along with the other pistol to have ever been offered by Steyr-Mannlicher in modern times − the GB model, based on a Barnitzke-type gas brake system − had both long gone out of production. 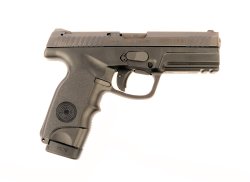 The overall technical layout was much akin to the one used by another, very famous Austrian-made pistols line − which Wilhelm Bubits himself had helped to develop years before − but the Steyr pistols were more ergonomic and sleek, and thus much more fit for small-handed shooters.

Steyr-Mannlicher's new pistols had one of the lowest recoil and muzzle climb levels available on the market, and the combination between their quick-collimation trapezoid sights with tritium inserts and the unique 111° grip inclination helped to achieve better and faster target acquisition. These semi-compact and sub-compact pistols were an instant market success, with good sales between civilian shooters and military and Police operators alike, in at least a dozen Countries. 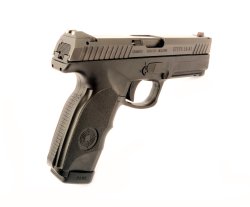 In 2004, their design was further improved following the combined feedback of civilian users and professional operators, and the new generation of pistols was dubbed the A1; the semi-compact M-A1 and the sub-compact S-A1 pistols featured a redesigned ergonomic frame, a MIL-STD-1913 "Picatinny" tactical rail, a loaded chamber indicator, a fully supported chamber right from the start, a roll pin in the slide improving trigger pull, and a modified extractor for easier spent cases ejection.

The A1 pistols was a great success as well, and the two baseline M-A1 and S-A1 pistols − which alone were already enough to satisfy the concealed and open carry needs of civilian shooters, military operators, Police officers and private security personnel − were soon followed by a mid-size C-A1 variant, which was even more apt for concealed carry and personal defense.

The latest model of the line was introduced at the IWA expo in Nuremberg (Germany) in March 2013, and as of today it was only sold in small quantities in a handful Contries in northern and central Europe.

The Steyr-Mannlicher company however recently announced that the global mass distribution for this new pistol is about to start, covering the rest of Europe, the Americas, and the rest of the world. 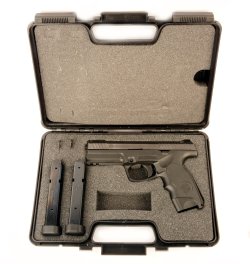 Steyr Mannlicher GmbH & Co., KG
A true lightweight: the Steyr-Mannlicher remains well under 900 grams even with a full magazine!

We are talking about the Steyr-Mannlicher L-A1 full-size semi-automatic pistol, the final variant for the series, which now offers all the possible dimensions that the platform may be adapted to.

Some may not understand why Steyr-Mannlicher would want to launch a "classic" full-size pistol when the market is going to a totally different direction. Nowadays, even Police and military operators often rely on semi-compact and compact pistols: their performances in range and accuracy aren't severely hampered by a barrel that's a few millimeters shorter, but on the other hand, they're lighter, more comfortable to carry, and easier to handle in confined spaces.

However, full-size pistols still have their fair share of followers. So to speak, many sports shooters − including IPSC shooters and others − will still want a long-slide pistol, and some Police and military forces seek for these as well.

Recently, the longslide (190cm. approx. OAL) Heckler & Koch P30L semi-automatic pistol was adopted by the Norwegian Police, following a trial that was open only to full-size handguns. While we can't state for sure whether or not the Steyr-Mannlicher L-A1 was indeed developed with the Norwegian trials in mind, the months immediately before and after said trials saw several European gun manufacturers launch a plethora of new full-size pistol models.

Steyr-Mannlicher's L-A1 will feed through double-stack, staggered, steel magazines with polymer followers, holding seventeen rounds of 9x19mm or 9x21mm-IMI ammunition (15-rds magazines for the 9mm variants are also available for these markets that pose restrictions to the ammunition capacity of civilian-grade firearms) or twelve rounds of .40 Smith & Wesson ammunition.

It will basically embody all the well-known features of the previous Steyr's A1-line pistols in an overall larger package: 188mm long, 136mm high and 30mm thick, it will come with a 4.5-inch barrel. Overall weight will range from 810 to 840 grams with a full magazine, depending from the caliber: a true featherweight.

Much like the previous Steyr-Mannlicher's M, S and A1 models, the L-A1 will feature a locking mechanism located above the trigger area, consisting of a circular plate with two holes in it and two positions ("F" and "S"), to be operated with a factory-issued key. When the plate is rotated to the "S" position with the provided key, the lock disables the trigger and barrel and prevents the pistol from being disassembled. This unique system was patented by Friedrich Aigner in 1999, and still is one of the world's best in its kind, offering protection against misuse in case of theft or unauthorized access; it is also compliant with many local and State regulations imposed in the United States.

Other features of the L-A1 pistol include a manual safety catch located inside the trigger guard, front slide serrations for quick chamber checks, and either quick-collimation trapezoid sights (with or without tritium inserts) or Match-type sights.

The Steyr-Mannlicher company so far has not released any informations about the manufacturer's suggested retail price for the L-A1 − although in these very few Countries where it is already available, it tops slightly under 600.00€ (roughly 435.00US$). We at ALL4SHOOTERS.COM will of course keep you posted about the availability and pricing of this pistol: more should be revealed next January, at the 2014 SHOT Show. In the meanwhile, you may want to consult the international dealers section of the Steyr-Mannlicher website to know if your Country is reached by the Company's distribution network.