This pistol made in the USA at the end of the 1960s – when concealed carry guns were mostly .38 Special caliber revolvers with two-inch barrel – cannot be defined graceful. At first glance you would think that it lacks the barrel, which actually measures only one inch (2.54 cm) in length.

A contribution from Giorgio Brancaglion12/16/2020 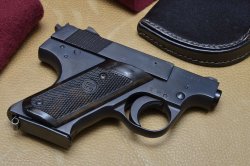 G.B., © G.B.
The right side of the Sterling Arms Model 287 PPL is completely plain. There are no levers, only the safety button.


During our visit to a gun shop we came across a pistol with a really original design and an interesting story that we want to tell you. The protagonist in our story is called Model 287 PPL and it's chambered for the .380 ACP cartridge.

Built by the Sterling Arms Corporation of Lockport, New York, from 1968 to 1971, the 287PPL is a semiautomatic pistol with a very unsettling appearance. But let's take a step back: Sterling Arms opened its doors in the late 1960s on the East Coast of the USA, beginning with the manufacturing of inexpensive .22 Long Rifle pistols like the 285 model, clearly inspired by the High Standard design, which was the most popular at the time. The fate of Sterling Arms Corporation, however, did not go as planned; in a few years the company went into crisis and in 1972 it was acquired by E & R Machine company, which kept it as a subsidiary company until 1983, when it went into final liquidation. It should be noted that the Sterling we are talking about has nothing to do with the British Sterling Engineering Company Ltd, manufacturer of the famous L2A3 submachine gun. 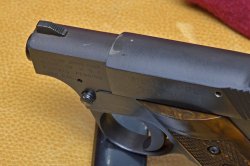 At first glance, the Sterling PPL could seem a High Standard to which the barrel and a piece of the grip have been cut off. But the barrel is actually still there – it is just one inch long (2.54 cm), and this makes it a very original firearm. Even the microscopic North American Arms NAA 22S  pocket revolver in .22 Short has a longer barrel: 1.125 in, or 2.85 cm, while among semi-automatic guns the Lilliputian Kolibri pistol in 2.7 mm caliber featured a barrel length of 1.3 inches, or 3.2 cm. The PPL's record seems therefore unassailable – obviously excluding miniature reproductions.  For sure, such a short barrel has negative consequences on accuracy and bullet stability. We did not fire it, but those who did report bullet tumbling on the target, which may not be such a major defect, given the intended use of the gun.

The Sterling PPL under the lens 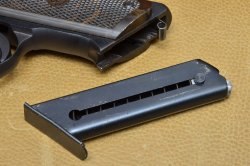 
The Sterling PPL is an  external hammer, blowback semiautomatic pistol, with single action trigger. Barrel and slide are made of steel with a blued finish, grips are black plastic. Sights consist of a notch rear and a ramped front sight integral with slide and frame, so there is no possibility (or need) to adjust them. Considering the intended use of the weapon, i.e. personal defense at short range, they are perhaps too large. The external hammer has a small, rather slippery knurled spur, while the safety is definitely unusual: it is a crossbolt located on the frame, just above the trigger guard, and to disengage it must be pressed down. The one-inch (2.54 mm) long barrel is fixed and is completely enshrouded by the frame. When field disassembling the gun, it is not possible to remove it from its housing.

G.B., © G.B.
The gun's only external control, the safety button, in an unusual position.


The Sterling 287 PPL is certainly a rugged and no-frills firearm, but it offers some niceties: you will notice that apart from the safety button, placed in an unusual position, there are no other projections on either side of the gun. There are no levers, there is no hold open and the magazine release is a very European-style coiled spring at the grip bottom. We find instead a hole on the left side of the frame, just in front of the slide rear serrations. The function of this hole is ingenious: by retracting the slide and inserting a pin into it, the spring is locked, allowing to remove the slide from the frame. The magazine is single-stack with a capacity of eight .380 ACP cartridges. The weight of the gun is 12.7 oz/360 grams, for an overall length of 5.39”/137 mm. To make a purely dimensional comparison, a Walther PP in .380 ACP measures 6.1”/155 mm in length and has a magazine with a capacity of six cartridges, while the weight is about 23 oz/650 grams. Analyzing only the technical specs, the Sterling 287 PPL was therefore ahead of the competition in terms of concealability and fire power, although this was probably frustrated by the poor accuracy. In any case, it remains an interesting testimony to a period when experimentation, especially in the USA, was frenetic. Certainly, today the Sterling Model 287 PPL can only be a collector's item for fans of strange guns. 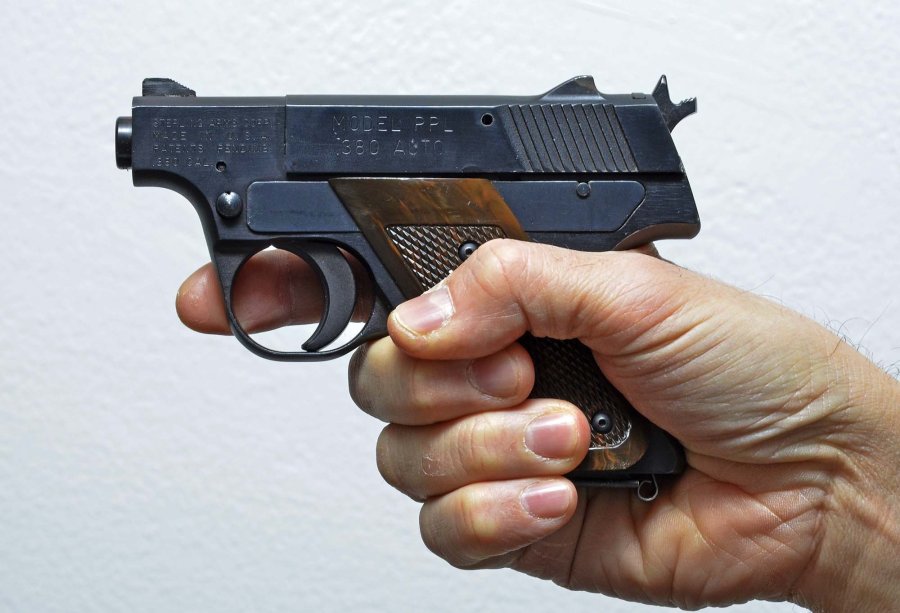 Subscribe to the Newsletter
This article is also available in this language:
IT
Click here for more information on the topics:
PistolsSemiautomatic pistols.380 ACP (9 Short)
That might interest you too: