New from Standard Manufacturing: S333 Volleyfire Thunderstruck. A patented, weird design featuring an articulated safety integral into the trigger, the S333 can fire two shots simultaneously, delivering all the 8 .22 Magnum caliber rounds in the cylinder in just three seconds.

For those who love not-so-usual guns, Standard Manufacturing brought to the SHOT Show its latest brainchild, the S333 Volleyfire Thunderstruck double-barrel, double action revolver. Chambered in .22 Magnum, it’s presented (a bit dramatically, maybe) as having “fast and tremendous firepower” since  “each pull of the trigger fires 2 rounds simultaneously and 4 pulls of the trigger delivers 8 rounds.” All this in just three second, according to the manufacturer. 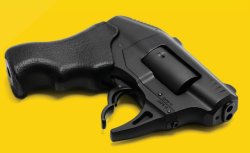 The S333 Volleyfire Thunderstruck has the interesting distinction of firing two shots per pull.

Conceived for defensive purposes and featuring a concealed hammer, the S333 Volleyfire Thunderstruck design visually reminds in some ways of the old 1850s Volcanic pistol - even if mechanically it’s a whole different animal, of course. The S333 Volleyfire Thunderstruck in fact functions as a conventional double action revolver, with the interesting distinction of firing two shots per pull. Even if it features iron sights, it’s obviously made for intuitive or instinctive shooting at short range.

The S333 has no full trigger guard – just a sort of “fang” in front of the trigger - but features an articulated safety integral to the trigger. It requires a deliberate and full pull of the trigger before the transfer bar will clear from the firing pins and hammers. Anyway, from what we can see we don’t feel so confident that the exposed trigger and the long safety lever can’t get caught in something with dangerous results. 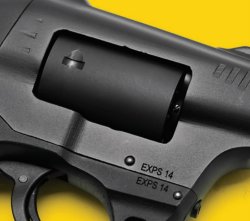 Not having tested it yet, we can’t know for sure if the S333 really “sets the standard for the ultimate in personal protection” as claimed by Standard Manufacturing – after all, you can fire just four .22 “double shots” with it. What’s certain, however, is that it can compete for the SHOT Show 2019 “most unusual handgun” prize.

In the US the S333 carries a price of 369 USD, but due to its particular design and operating mechanism it’s hard to say if it’ll ever reach the European market.

Find all the news from SHOT Show 2019 on all4shooters.com/all4hunters.com