A contribution from Pierangelo Tendas07/17/2015

Signal9 Defense is a firearms manufacturing company headquartered in Gallatin (Tennessee, USA) that first came under the spotlight between the 2013 NASGW and the 2014 SHOT Show when − under the name of "Edge Arms" − showcased a CAD design of a perspective pocket pistol conceived for concealed carry and personal defense.

Dubbed the "Reliant", this pistol had to be a revolutionarily modern take on the "Derringer" concept − a break-open, four-barrel pistol conceived not as a secondary, but as a primary concealed carry defensive pistol for civilian shooters, and as a backup, off-duty or undercover personal protection weapon for law enforcement personnel.

At this year's edition of the NRA Annual Meeting and Exhibits − held on May 20th thru 22nd in Nashville, Tennessee − the company, under its new name of Signal9 Defense, finally debuted the first production-grade version of the Reliant, and started to accept orders from wholesalers and retailers in the United States (no exports are planned for the time being!).

The reduced overall height (4.25"/10,79cm) and width (1.25"/3,17cm) make it comfortable to carry in a pocket or purse; barrels are 2.63"/6,68cm. long, and the grip design, with its checkered black polymer panels, retain the well-known 1911 pistol profile to remain comfortable for those users who are already familiar with the most quintessential American handgun.

The Reliant pistol from Signal9 Defense sports a hard-anodized, black lightweight aluminum alloy frame with ambidextrous break-open lever, and a black steel quad-barrel assembly. The front sight is fixed, while the rear sight is dovetailed in the rear portion of the frame and sports a two white dot alignment system.

The hollow grip holds a speedloader, held in place by a powerful magnet, providing the shooter with quick and easy access to four additional shots for a quick reload should the need arise.

The Signal9 Defense Reliant pistol can be safely carried with chambers loaded, as it is based on a rotating firing pin, similar to the one used in some 20th Century Derringer-styled designs such as the Mossberg Brownie or the COP .357 pistols.

The firing pin is rotated from barrel to barrel by the trigger pull − which is long for safety (think of a double-action only revolver) but extremely smooth at 8lbs/3,6 kilograms.

The action design of the Signal9 Defense Reliant pistol can be thought of as a modern take on the action of the Webley-Fosbery revolver, eliminating the need for any kind of manual safety while at the same time protecting the user against accidental discharges caused by shocks, drops, or trigger snagging.

In collaboration with LaserMax, Signal9 Defense also equips the Reliant pistol with an integrated red or green laser, which is automatically activated by the shooter's hands hold on the grip and provides an important aiming advantage in low-light conditions or extremely close-quarters engagements.

The Signal9 Defense Reliant pistol is slated to enter mass production and distribution in the United States of America before the end of the year 2015, at an expected manufacturer's suggested retail price of US$449.00. 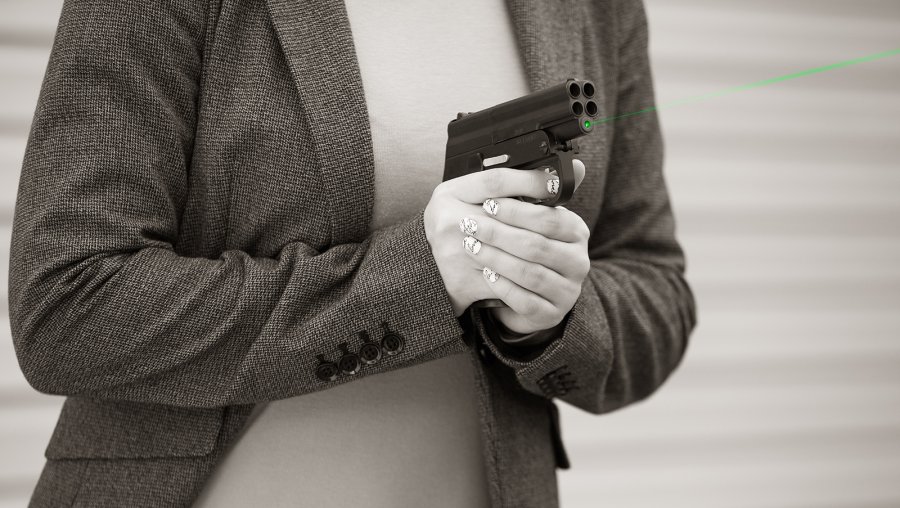 Oleg Volk
The Signal9 Defense Reliant pistol should be available for purchases on the U.S. market by late 2015
Subscribe to the Newsletter