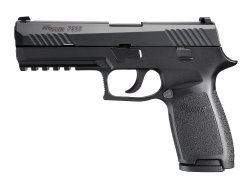 The SIG Sauer's participation to the EUROSATORY 2014 defense expo − held at the nord-Villepinte exhibitions and convention center, at the outskirts of Paris, from June 16th to 20th − has been a good occasion to have a look at whatever new and interesting the Swiss-German group, in collaboration with its north-American branch (SIG Sauer, Inc.) is currently offering in the field of small arms and light weapons for military, law enforcement, governmental and security customers.

As all4shooters.com could soon find out, the Company is aiming a lot to boost the sales and the popularity of the newest generation P320 model,  SIG Sauer's first semi-automatic pistol to feature a double-action, striker fired system, conceived and engineered following direct input and suggestion from America's professional (MIL/LE) community. 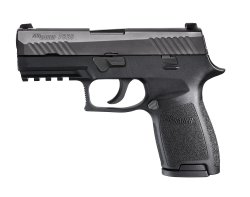 SIG SAUER GmbH & Co. KG
SIG Sauer's P320 pistol is available in the "Full-Size Nitron" and "Carry Nitron" versions, and in either 9mm or .40 chamberings

Although directly inspired by SIG Sauer's rich experience with previous, highly successful models − particularly the P250 series − the P320 pistol is unique in its kind and in SIG Sauer's wide array of service pistols, and not just because it's the company's first striker-fired.

The U.S. laws and many international regulations clearly establish that a "firearm" is actually that fundamental part of a gun as a whole where the serial number is permanently affixed.

Under this point of view, the architecture of the SIG Sauer P320 is such that both the Nitron-finishedslide, the barrel and the frame can be interchanged to shift between a full-size (230mm long overall, 119mm barrel) to a "Carry" version (183mm long overall, 99mm barrel); the only parts that always remain the same are the magazine and the stainless steel frame insert, which hosts the trigger pack. The P320 in its full-size variant holds up to 14 rounds in .40 Smith & Wesson or .357 SIG and up to 17 rounds in 9x19mm, while the "Carry" variant holds 13 rounds of .40 or .357 ammunition and 15 rounds of 9mm ammunition. 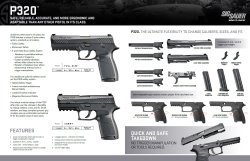 The reinforced polymer frame − featuring no slide guides, as those are integrated in the stainless steel insert − sports a MIL-STD-1913 Picatinny rail for tactical accessories, and of course integrates the grip assembly. Frame interchangeability on the SIG Sauer P320 pistol also means that the users will be able to shift from a "Small" grip model to a "Medium" or a "Large" grip model according to the dimensions of the shooter's hands.

The trigger of the SIG Sauer P320 is also interchangeable; although the pistol comes from factory with a standard trigger, a replacement trigger with a Glock-type safety can also be obtained.

The trigger pull of the SIG Sauer P320 ranges from 5.5 to 7.5 pounds − roughly 2,5 to 3,4 kilograms. The P320 comes without any sort of manual safety, opting instead for an integral striker release safety, preventing the gun to fire unless the trigger is fully pulled, and for a disconnect safety that prevents out-of-battery shooting.

All controls on the SIG Sauer P320 are otherwise ambidextrous, namely the magazine release catch and the slide stop release lever; the pistol comes with SIGLITE night sights, adjustable for windage.

The SIG Sauer P320 in its "Full-Size" and "Carry" variants is already available for test, evaluation and purchase by military, law enforcement and government customers; as far as commercial/civilian availability is concerned, the P320 is, as of today, being distributed only in the United States of America, at a manufacturer's suggested retail price of 713.00US$ − although street price is reported to be much lower. Prospective non-US buyers should check with their local SIG Sauer distributors for slated availability and pricing.