Yet a new addition to Remingtonʼs 1911-R1 pistols line, the “Carry” model addresses to all those who predilige John Moses Browningʼs classic design for everyday carry 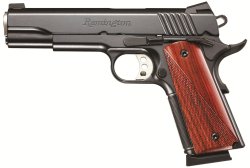 Remingtonʼs legacy in handgun manufacturing is die hard; albeit the company withdrew itself from the pistols and revolversʼ market shortly after World War 2, with the exception of single-shot Silhouette pistols, the tradition remained in its heart and more specifically the 1911-A1 design remained deeply a typical Remington heritage, having the company been one of Americaʼs first to be contracted to manufacture John Moses Browningʼs quintessential American pistol for the U.S. Army shortly before World War One.

The 1911-R1 “Carry” is a full-size 1911 pistol that is “de-horned,” meaning that any sharp edges have been smoothed, making the pistol easier to carry and holster without the worry of the edges catching or grabbing. 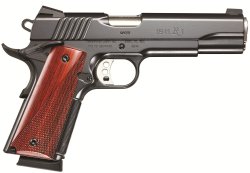 Remington Arms Company, Inc.
The 1911-R1 Carry pistol remains a full-size, despite what common taste would ask from a concealed carry pistol

The Remington model 1911-R1 “Carry” pistol is shipped in a custom carry case with one seven-round and one eight-round magazine and a barrel bushing wrench. Suggested retail price is $1,299 on the U.S. market; no indications concerning availability or price for other Countries are known at this time.