We had a chance to try out the MKE T94 A2, a semi-automatic and licensed Turkish-manufactured version of one of the world's most famous submachine gun, the Heckler & Koch MP5. In our range test, we also tried to recreate a home defense scenario.

A contribution from Antonio Azzinnari06/27/2022

The Heckler & Koch MP5 in 9x19 is one of the most successful submachine guns and one with the longest service life. Introduced to the market in 1966, this handy and accurate SMG, based on an original roller-delayed system, has been manufactured  in many variants and is still one of the most popular and appreciated guns for professional use. 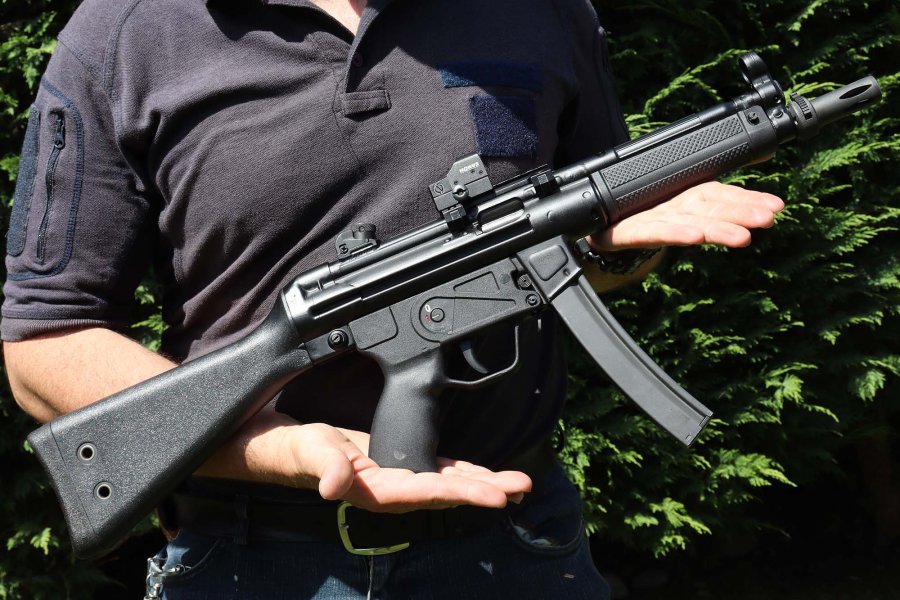 The left side of the MKE T94 A2. The only and minor difference in appearance is the profile of the pistol grip.

The one we introduce here is the MKE T94 A2, the civilian version of the MP5 that was born in the Turkish factories of Makina ve Kimya Endüstrisi Kurumu (Mechanical and Chemical Industry Organization), in Ankara. Originally designed as a submachine gun capable of selective fire and intended for the Turkish special forces, it comes to the civilian market in a semi-automatic version.

The locking system used in the MP5 has always been one of the most reliable in terms of safety, reliability and accuracy, widely tested in the military and law enforcement. The MKE T94 A2 has a retail price just under 2,500 euros and fills a gap among military/LE derived civilian firearms in 9x19. 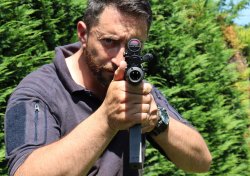 The MKE T94 A2 seen from what is colloquially known as "the wrong end". Width is minimal.

Picking up the MKE T94 A2 one immediately notices the excellent balance of the weapon as well as the quality of the steel used and the workmanship that made it possible to obtain reduced weight and superior stability compared to the different submachine guns with which the MP5 have been competing for decades now. The great stability of the MP5 platform has also allowed this civilian 9mm T94 A2 version to be an extremely accurate firearm even at longer distances.

The Turkish MKE-made version features a reduction in price but not in quality, as seen in other versions of H&K guns built under license. On the outside, the T94 A2 has a matte black finish, as do most of these types of weapons for professional use. The martial look makes it particularly eye-catching, a true icon of tactical weapons.

The pistol grip, unlike its German siblings, is made of anatomically shaped technopolymer and is suitable for right-handed shooters. The stock – a full stock here – is also made of synthetic material with steel inserts. However, the T94 A2 can be fitted with all types of MP5 stocks on the market. On the left side is a slot for attaching the sling (a classic three-point type, but extremely functional), and the stock also features the two holes near the recoil pad, which serve as holders for disassembly pins.

The sights are military type and consist of a protected front sight like all MP5 versions and the classic H&K drum sigh drum with four apertures. For testing, we equipped the gun with a Konus red dot, which is inexpensive but functional. 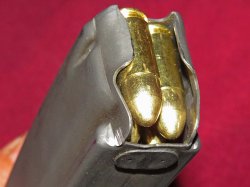 Detail on the lips of the double-stack magazine. One with a capacity of 10 rounds comes with the gun.


The T94 A2 has a fire selector on the receiver, which obviously in this version does not include the full-auto position, having just two positions: fire (I) and safety (0). The control is easily operated with the right thumb. The magazine well, which is effective at accommodating – albeit somewhat  "roughly", as in all military weapons – sheet metal double-stack magazines with capacities of 10 and 20 rounds (higher capacity curved magazines are also available on the civilian market and for sporting use). The magazine release is ambidextrous and can also be operated by pushing the lever located in front of the trigger guard, which is very practical and immediate. 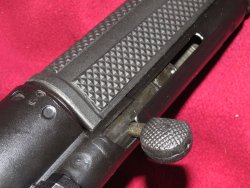 The bolt can be locked open by rotating the cocking handle into a special indent, as seen in the photo.

On the left side of the gun, above the handguard, is the well-proportioned cocking handle: there is no last round bolt open, since during cycling the cocking handle does not move as it is non-reciprocating. One can, however, manually pull back and lock the bolt open by rotating the cocking lever upwards and into the special indent in the cocking lever housing. The barrel is hammer forged, with the muzzle featuring a thread and the classic three-lug adaptor. The chamber is fluted to prevent the cartridge cases from sticking inside it. 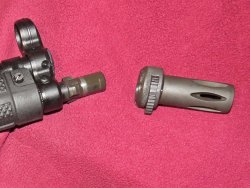 On the muzzle we find a flash hider and H&K's classic three-lug adaptor.


By acting on the respective retaining pins, the handguard is easily removable, as is the stock, which can be replaced with telescopic stocks in order to reduce the footprint for those who need smaller weapons. The locking pins of the MKE have retaining springs and their removal allows for quick disassembly in the field. The main components of the weapon are: receiver, stock/grip, barrel, bolt, forend, and magazine.

On the inside, the T94 A2 shows excellent workmanship with minimal tolerances – the MKE assembling quality can be appreciated.

The MKE T94 A2 on the shooting range 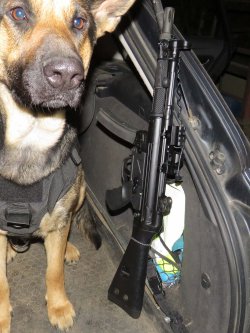 The MKE T94 A2, just like the H&K MP5, is particularly suitable for transport inside a vehicle thanks to its compact size.


The beating heart of the gun is the roller-delayed blowback system. The bolt is smooth notwithstanding the rollers friction, which depends on the quality of the steel.
The trigger assembly is specially built for the semi-automatic version and does not derive from the full auto assembly.

The trigger requires quite a pull: release breaks at a weight of about 3 kg at the end of travel, and is crisp and precise. As you become familiar with the gun, you can feel the moment immediately preceding the release, as can be noticed from a slight resistance. 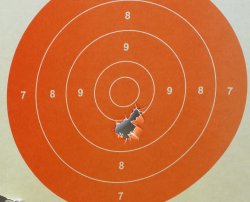 Ten-round group at 25 meters with red dot sight. Accuracy is not a problem!


Recoil is nonexistent and muzzle flip minimal, easily manageable especially considering other firearms with which it compares. This really makes a difference in terms of stability and accuracy.
Patterns achieved on the range from static shooting are excellent, but this gun offers the best in operational contexts. We therefore also used and tested it in a shooting range designed for law enforcement and military professionals.
The weapon's maneuverability in confined urban environments allowed us to engage targets instinctively and quickly without causing any hesitation for the user. We recorded no malfunctions or jams even when using different types of 9x19 ammo. The T94 A2 impresses with its controllability and manageability during shooting actions, even at medium and long ranges. With quick firing strings, the shots still go where we want them to go.

In conclusion, using the MKE T94 A2 one understands why the MP5 platform is so successful, still remaining among the best submachine guns for LE/military professionals after more than half a century. We also fired the weapon left-handed, and results did not change: all controls were easy to reach.

The MKE T94 A2 sells for around 2,300 euros. The price includes a 10-round magazine, original hard case, manual, sling and cleaning kit.

Subscribe to the Newsletter
This article is also available in this language:
IT
Click here for more information on the topics:
Pistols9 mmGECO
That might interest you too: