Headquartered in the Washington State, Lionheart Industries teams up with S&T Motiv to launch a line of high quality semi-automatic 9mm pistols on the U.S. market! 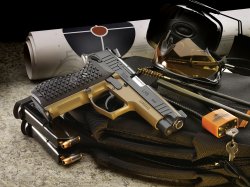 Headquartered in Busan, South Korea, the S&T Motiv company − formerly Daewoo Precision Industries Co., the defense technologies division of the Daewoo conglomerate − has been manufactured the K5 9x19mm-caliber short recoil-operated, locked-breech semi-automatic pistol since 1989. Currently the mainstay service sidearm for the Armed Forces and Law Enforcement agencies of the Republic of Korea, the K5 pistol has also been marketed commercially to civilian shooters and professional operators worldwide as the DP-51, and even spawned a compact version, a .40 Smith & Wesson caliber variant, and a much more rare .45 ACP modification. Daewoo's pistols enjoyed a modest commercial success, striving to compete in an already glutted market, and nonetheless, all owners always appreciated their utter reliability under all conditions, their efficiency with any kind of ammunition and, most important of all, their accuracy. The signature feature of the DP-51 and its variants is their patented Tri-Action: other than just the standard single-action and double-action working options, the DP-51 variants' trigger mechanism allows the hammer to be decocked for safe carry, while still keeping the mainspring compressed. A light pull on the trigger causes the hammer to flick back, after which the pistol will behave in conventional single-action mode. 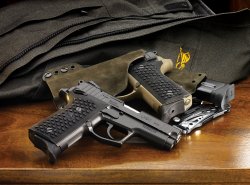 Lionheart Industries
At 7" overall lenght, the LH9C is the compact version of the baseline LH9

Excessive competition and costs caused Daewoo pistols to remain relatively rare on the market for years − and with the demise of the Daewoo conglomerate in 1999, they quickly became even more rare. Only in recent years the full-scale manufacture was restarted by S&T Motiv, the legacy company that picked up where Daewoo Precision Industries left, and yet they still remained pretty rare on international civilian markets. However, now the wait could be over for many gun enthusiasts, at least in the United States. S&T Motiv has in fact reached agreements with an American company, Lionheart Industries (headquartered in Redmond, WA) to restart commercial distribution of the DP-51 and its variants in north America, albeit under a new name and with Lionheart's own trade mark. The new pistols line, comprising three models, was recently launched on the U.S. market. 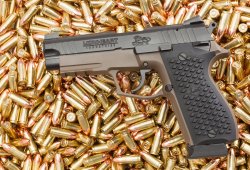 Oleg Volk
The LH9-MkII is basically a railed frame LH9, and is available in a plethora of finishes like all Lionheart Industries pistols

The new baseline DP-51 variant is now dubbed the Lionheart LH9, but all the key features are essentially still in place, including the 15-rounds, double stack 9x19mm magazine, the forged, hard-chrome chambered, 4150 steel match-grade 4.1" barrel, the hammer-forged 4140 heat-treated steel slide and the hammer-forged 7075-T6 aluminium frame; the hammer forging production process fortifies the material with literally tons of pressure, resulting in an ultimate tensile strenght of 78,000 PSI. 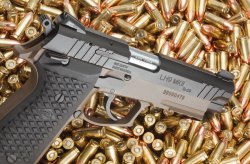 The Lionheart Industries pistol line numbers two more variants, both featuring the same technical and manufacturing precision procedures as the LH9. A compact variant, named the LH9C, is 7-inches long, sports a 3.6-inches barrel, weighs 24.2 oz. empty and comes with a 10-rounds magazine. A combat/tactica variant of the LH9 design, dubbed the LH9-MkII, also exists, and is basically the same as the baseline LH9, with the addition of a MIL-STD-1913 "Picatinny" railed frame for tactical accessories.

All Lionheart Industries pistols are shipped in a 1000-deniers Cordura ballistic Nylon bag including a bottle of Frog lube, a trigger lock, a bore brush, a cleaning rod, a cleaning brush, the owner's manual and warranty card for the gun. All prices are listed on Lionheart Industries' website, and appearently the first stocks of the LH9, LH9C and LH9-MkII pistols are already sold out. Interested and perspective buyers should contact the company for further informations concerning availability and pricing in their jurisdictions.