At IWA 2019, the rather unknown Czech manufacturer Laugo Arms showed the new model for the very first time to the market. In 2020 it was also introduced to the US market at SHOT Show. The innovative Alien pistol is said to be better controllable when firing than all other large caliber pistols on the market due to special design features. Whether it's just clever marketing or there is some truth in it, we from all4shooters.com wanted to find out more, so we put it through an intensive test. Watch our video too.

A contribution from Tino Schmidt and Stefan Perey / all4shooters.com02/12/2020 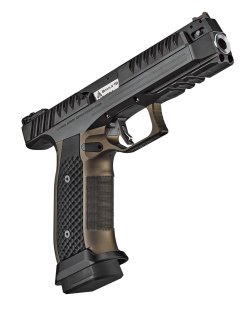 The Laugo Arms Alien was uncompromisingly designed for dynamic IPSC sport shooting, or more precisely, for the Production division that is increasingly on the rise. Since faster shot-to-shot times provide a competitive advantage here and aids such as compensators are not permitted, the technicians had to come up with something special. This brings us straight to the most striking feature of the racy sports pistol in 9mm Luger, namely the barrel that sits low in the grip frame. This significantly shortens the lever ratios that give a gun a strong recoil. In addition, the barrel is permanently fixed to the frame, so that the moving parts are reduced, which also promises a higher inherent accuracy. This technically interesting pistol was combined with a gas piston delayed blowback system, as already seen in the Heckler & Koch P7. The frame is designed in two parts, the frame itself being heavy steel and the grip housing light metal alloy. Thanks to that the Alien, which by the way holds 17+1 cartridges in 9mm Luger, weighs about 1200 g. Since the sights are also designed to be attached to a fixed, non-reciprocating top rail, they don't move when firing. This is especially useful if you want to mount a red dot sight on the gun, as this considerably increases the life span due to the much reduced stress. The manufacturer also includes an easily interchangeable sight rail, which can be mounted in a few seconds without tools. On this second rail Laugo Arms supplies its own red dot sight. Workmanship is very attractive and the gun comes as a set with three  magazines, Kydex holster and red dot sight. However, you will have to pay 4.680 € for all this!

The technical design of the Laugo Arms Alien in detail 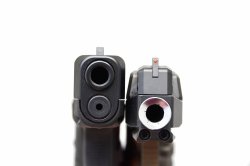 Even in comparison with an already low-bore GLOCK G17, the difference in height and barrel axis of the Laugo Arms Alien is huge.

The guiding principle of the designers when creating the pistol was to achieve the lowest possible muzzle axis. This is particularly interesting where fast strings of shots provide a competitive advantage, which is the case in IPSC/action shooting and other dynamic shooting disciplines. Since the Production Division in particular has developed into the most popular division both nationally and internationally, it's also a worthwhile area of interest for many manufacturers. Thus, Laugo Arms has seemingly pulled together all possible and rule-compliant features to teach the Alien a gentle firing behavior. On the one hand there is the extremely low barrel axis. According to the manufacturer's information, it's about 0.027”/ 1.7 mm below the upper edge of the long grip spur (beavertail). For comparison: in an external hammer 1911, the barrel bore axis is about 1.18”/ 30 mm above the hand. A lower bore axis is already possible with striker fired pistols – we could experimentally measure about 0.7”/ 18 mm in the popular GLOCK 17. Thus, the "negative value" of the Alien sounds almost fantastic and creates great expectations for the first shots. The worldwide dominating Browning-Petter-SIG locking system with tilting barrel couldn't be used due to the extremely low barrel position. That's why a decision was made to mount a fixed 4.9”/ 125-mm long barrel directly to the grip. With a fixed barrel, a pure blowback system is a good choice, but it would be too heavy on a pistol in 9mm Luger caliber and would cause a lot of trouble when firing.

Test: with the 9mm Laugo Arms Alien pistol on the shooting range 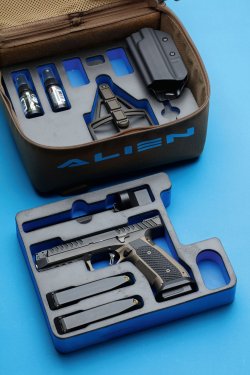 ULI GROHS, © ULI GROHS
For this exclusive gun as a complete set with three magazines, red dot sight and holster, the manufacturer charges about 4680 euro.

With the alien in our luggage we made the trip to the next shooting range. For accuracy testing we selected 6 factory cartridges in a bullet weight range from 115 to 154 grains. The included interchangeable sight rail with a factory supplied MRDS helped us with this. Its 6-MOA dot came along on 25 m without any noticeable parallax error, but being somewhat egg-shaped it reminded us of the NFL. Already with the first shots to determine the point of impact you could feel the straight recoil into the hand with minimal muzzle flip. You can expect a higher accuracy potential from pistols with fixed barrels than from the dominant mass of pistols with tilting-barrel locking systems – and we were not disappointed. Our test gun particularly liked the national food in the form of the inexpensive Sellier & Bellot 124-grains FMJ “bulk pack” cartridges with a 0.86”/ 22 mm grouping from two average 5-shot groups. Even the Hornady American Gunner couldn't top this, despite the undoubtedly better bullet, but a 0.94”/ 24 mm grouping almost made the difference. The GECO 124 Grains FMJ was just as close at 1.1”/ 28 mm. The average of all loads was a very good 1.37”/ 35 mm. With all ammunition types we could consistently hit the standard target inner circle. A further small positive side effect revealed by the Alien with its fixed barrel compared to pistols with tilting barrels: with different bullet weights, there was less vertical dispersion.

This means that fewer hit point / sight corrections should be made for different loads. This was followed by some dynamic "drills" on paper targets. It was really impressive to observe how little muzzle climb the Alien showed when firing. This was especially noticeable with one-handed shooting with both the strong and weak hand. Using soft loads such as the GECO 154-grains FMJ and the weak hand, the red dot never moved out of the lens of the MRDS at any time and was immediately back in the center. We also tried out some 20-cm steel plates with the iron sights. At 10 meters the shot-to-shot times ("split times") were in the low 0.20 seconds range, which is not yet so outstanding and can be achieved with conventional pistols.

You can see what the Laugo Arms Alien pistol can do on the shooting range in our exclusive video with Tino Schmidt: 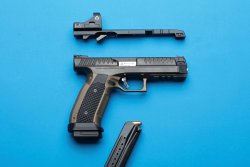 ULI GROHS, © ULI GROHS
The sight rail can be easily removed without tools by pushing out a fixing bolt under the front sight. Laugo Arms factory supplies a second rail with its own MRDS.

Only on longer ranges the advantage of the Alien became even more noticeable in our opinion. At 20 m split times were between 0.25 and 0.35 seconds with no problem. On 30 m, 0.45-0.49 seconds were quite feasible. Considering the short acclimatization phase, we found this to be very respectable. However, one disadvantage should not be completely concealed. Left-handed people will have their problems with the Alien. In ambidextrous use, the ejection port can in fact be so blocked by the shooter's hand that cases won't be ejected properly and thus malfunctions will result. Since we had a lot of fun shooting with the Alien, 500 rounds went quickly through the barrel without any trouble. The good shooting behavior was also felt by other, very experienced shooters. Those, by the way, who have ever fired a Heckler & Koch P7 will also recognize the same feeling with the Alien. That is, a short, quick recoil impulse into the hand follows the shot, which is distributed without much force. We weren't able to determine a heat problem due to the gas delay system – the Alien felt hardly warmer than other guns. 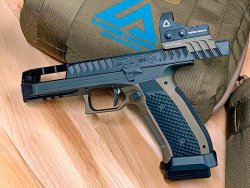 The Alien is now also approved for the young Production Optics Division.

The young Alien pistol by the Czech manufacturer really sets new standards in shooting behavior and due to the fixed barrel it also proved to be extremely accurate. In addition to this, there is a high level of workmanship, functional reliability and a practical complete equipment. However, for the complete set with a posh two-compartment nylon carrying case, MRDS interchangeable sight rail, holster and three magazines, a hefty 4680 euro is required. This should prevent a wide distribution of the pistol, which is limited to 500 pieces for the time being. But who knows, maybe the Alien will be offered at a lower price one day if the company is successful. All those who are not willing to spend so much money can take comfort in the fact that in IPSC sports extremely fast split times are only a small part of the whole. Experience, coolness under competition stress, course strategies as well as quick magazine changes and fast position and target transitions – not to mention clean hits – are just as important. Nevertheless, in our humble opinion the Alien has raised the bar a little bit in the realm of specialized IPSC/dynamic disciplines pistols – Kudos!

Further information is available on the Laugo Arms website.

Also highly innovative and with a very low barrel axis: the Arsenal Firearms Stryk B under test.

Subscribe to the Newsletter
This article is also available in this language:
DEIT
Click here for more information on the topics:
PistolsIPSC / Dynamic shooting sport9 mm9x19 mm (9 Luger)
That might interest you too: