Test and video: Korth Twin Classic revolver – Two is better than one

Don't worry, you're not seeing double! Beyond any serious German shooting sports regulations, Korth boss Martin Rothmann had the imposing "twin gun" shown here created on a whim. Connected at the top strap, the two noble revolvers with a firepower of 12 rounds in the powerful caliber .357 Magnum represent a gun curiosity that we would like to present to you in more detail – and in a video – here. 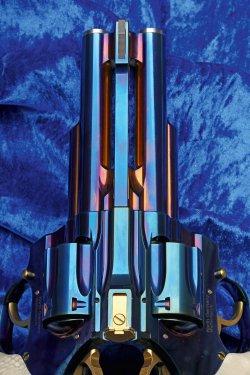 Dieter Licht
The iron sights of the Korth Twin Classic are centered.

The German fine guns manufacturer Korth is increasingly devoting itself to the production of elaborate one-offs for the international, well-heeled clientele, which definitely cultivates a special taste. The credo of the noble manufacturer in this regard: "Behind the boundaries of craftsmanship lies art". Here, as always, beauty lies in the eye of the beholder. Martin Rothmann and his team often create "themed revolvers" with special details, engravings, presentation cases and decorative accessories. Those who want to call such a gem their own not only have a fat wallet, but certainly not infrequently also an already considerable number of more practical firearms, so that such a unique piece should crown the collection as an "eye-catcher".

Mirror, mirror in my hand: how did Korth come up with the idea of building a twin revolver?

Since Korth had produced a small series of 30 revolvers in genuine right- and left-hand versions, the idea was born to try out a double revolver. Everyone in the Korth team was curious to see how such a twin gun would shoot, even more so when two .357 bullets from a full load were sent on their way at the same time. Since the end of 2020, seven of these exclusive Korth Twin Classic revolvers have been made so far. Two examples have already been sold to the well-known gold and silversmith Vivien Müller in Switzerland - they will be turned into unique art objects for an auction. 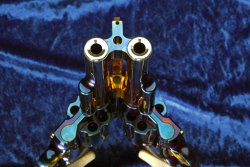 Dieter Licht
A view of the extremely distinctive muzzle section of the barrel pair on the Korth Twin Classic Cerberus.

The two revolvers are connected at 45 degrees to each other, so that the cylinders can be swung out toward the inner sides. This makes it theoretically possible to open both cylinders at the same time and load them with a dozen cartridges. The blue-coated Twin Classic is one of five in the "Cerberus" series, named after the hound of hell in Greek mythology.
The gun has a barrel length of 5.25"/133 mm without "full underlug" (the ejector housing extending to the muzzle) and white grip panels made of ivory substitute ("Snake Ivory"). It comes in a presentation box made from the oak beams of a 300-year old barn. The "Oak River Box" was painstakingly hand-polished to a high gloss at Korth's facility, embellished with  cylinder-shaped brass hinges and an Alcantara interior. Also shown, the gold-plated Korth Twin Classic with brass grip panels has a barrel length of 10"/254 mm. For example, well over 200 hours of work went into the Korth Twin Classic Cerberus. 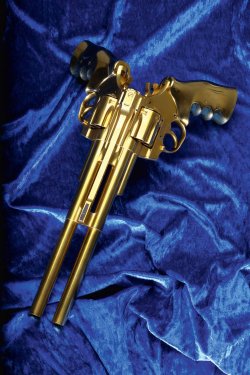 Dieter Licht
Goldfinger says hello: here is another Korth Twin Classic double revolver in .357 Magnum with 10" barrel. With regard to the surface
finish, engravings and other equipment details, there are virtually no limits to the imagination of the customer.

Meticulous examination of such a twin revolver reveals that the double barrel sleeve was made from a single piece of tool steel and is the main component for connecting the two six shooters. Above the top strap, a connecting piece is inserted that fits exactly into the cutouts of the individual rear sight millings. The connecting piece is then in turn given a central milling for the rear sight blade so that the rear sight is precisely centered in line with the corresponding front sight. Theoretically, it would be possible to separate the two revolvers by unscrewing the barrels and replacing the double barrel sleeve with two single barrel sleeves. Korth considered offering this conversion kit as part of the set. However, they discarded the idea because, according to firearms legislation, it would then be two firearms and not just one.

On the shooting range: how does it feel to shoot the Korth Twin Classic?

Even though it is manufactured less for the shooting range and more for the showcase, we even had the rare privilege of shooting the Korth Twin Classic, which is an extraordinary experience due to the double grip angle alone. Here, we only ever swung open one cylinder at a time for loading, which seemed more practical than swinging out both barrels at the same time. Of course, you can also shoot the twin revolver in single or double action mode. It is a challenge to have the double shot released at exactly the same time, even with pre-cocked hammers, but recoil and muzzle flip are quite controllable. You can see more about this in our video. The prices of these exclusive as well as exotic Korth Twin Classic models are available on request from the manufacturer.

Subscribe to the Newsletter
This article is also available in this language:
DEIT
Click here for more information on the topics:
Korth GermanyPistols.357 MagnumGECO
That might interest you too: 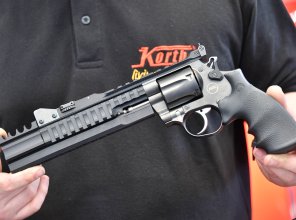 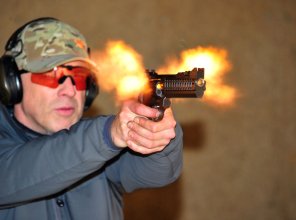 An upscale, practically equipped match revolver that is ‘Made in Germany’ in the basic .357 Magnum caliber with an optional 9 mm Luger conversion cylinder: that’s what the brand-new Korth Super Sport has to offer. We were the first to put the premium revolver from Germany through its paces. 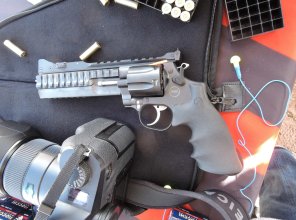 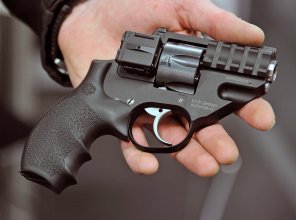