The “cellphone pistol” is now available

Ideal Conceal pistol was ingeniously designed to resemble an ordinary smartphone. It's a hammerless double-barelled derringer chambered in .380. If interested, check your local laws. 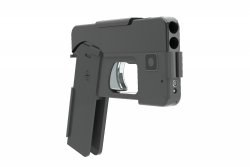 We have to begin with a warning: if you're interested in purchasing it check your national gun laws beforehand, since it's highly likely that it's not legal in your country. Ideal Conceal's Pistol is not only a double barreled .380 caliber gun that's about the size of a Samsung Galaxy S7, but it also looks like a cellphone when folded. “In its locked position it will be virtually undetectable because it hides in plain sight”, they claim.

They started back in 2016 with a prototype, then a crowdfunding campaign in 2017. Now the company announces that the gun is shipping for those who pre-ordered guns.

For personal defense only 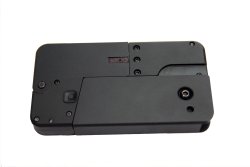 The Ideal Conceal pistol can't be fired when folded.

Ideal Conceal is a self defense gun that can be carried folded in a pocket of clipped by your side – it features a built-in clip. With just one click of the safety it opens and is ready to fire. Technically speaking it's a a striker-fire design - it has no external hammer - with two short .380 caliber barrels and a tip-up manual loading system.

The gun itself could be defined as a derringer (sort of), aside from the fact that it was ingeniously designed to resemble an ordinary smartphone, as Ideal Conceal’s CEO Kirk Kjellberg explains in this video released for the crowdfunding campaign:

As for safety, it can't be fired when folded. Ideal Conceal is fitted with small fixed sights, but it can also be equipped with an integral laser sight. Entirely US made, it's on sale with a retail price of 575 USD.

We can't comment about its effectiveness as a defense gun and we won't debate the problems that a gun looking like a phone could cause for law enforcement. But as we stated at the beginning, if you really want to own one you'd better check your local laws...