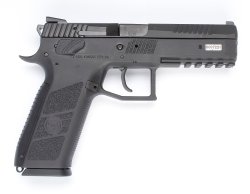 Česká Zbrojovka A.S.
The P-09 “Duty” pistol will hold 15 rounds of .40 caliber ammunition and an astounding 19 rounds of 9mm ammo

CZʼs P-07 “Duty” autoloading pistol, introduced a few years ago, departed in many ways from the Czech manufacturerʼs canons in terms of handguns. Featuring a polymer frame and a sleek, aggressive layout in a semi-compact package, the P-07, available in 9mm and .40 caliber, was an instant success between civilian shooters and professional operators (Military, LE, private security). Given its potential as a combat handgun as well as a great IPSC shooting instrument, the fine folks at CZ decided to come out with a 5-inch barrel, full-size version of the P-07 design, dubbed the P-09 “Duty”, which was first spotted at the 2012 NASGW expo and whose commercial launch will take place next January at the 2013 SHOT Show in Las Vegas (NV, U.S.A.). 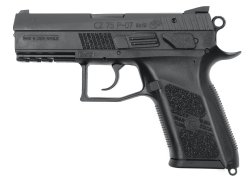 Česká Zbrojovka A.S.
The P-09 incorporates all the advantages of the previous P-07 semi-compact model in a full-size package for IPSC shooting and military issue

Boasting an impressive 19+1 capacity in 9mm rounds and 14+1 in .40 Smith&Wesson calibers in a flush-fitting magazine, the P-09 “Duty” full-size pistol will feature the same controls configuration as the P-07 model, coming with ambidextrous decockers installed that can be easily converted to manual safeties with the supplied parts and instructions. Also included are three interchangeable backstraps that allow the user to customize the pistol’s grip to their hand while retaining the natural point of aim that CZ handguns are known for. Coming with an integrated MIL-STD-1913 Picatinny rail, the P-09 is readily adaptable to tactical accessories for professional use, while the CZ patented OMEGA DA/SA trigger provides crisp single action trigger break with the safety of a DA first-pull option.