The quintessential CZ-75 pistol gets yet another upgrade: CZ is now marketing the "Shadow Line" of model 75 and SP-01 variants, only for the most demanding shooters!

A contribution from Pierangelo Tendas09/19/2013 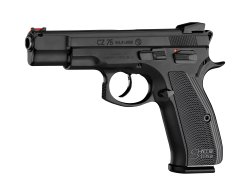 Česká Zbrojovka A.S.
The "Shadow Line" CZ-75 variants were much upgraded over the baseline versions, for optimal dependability and performance

Headquartered in the Czech town of Uherský Brod, the CZ - Česká Zbrojovka A.S. is one of the world's biggest and most important manufacturer of sporting, defensive and military/Police service firearms, offering a wide array of pistols, shotguns, rifles, carbines and assault weapons to satisfy shooters and operators from the entire world at some of the most competitive prices available on the market today − despite the huge effort that the Company undertook in the past decades to acquire state-of-the-art manufacturing technologies and upgrade their products line to meet the demand for an increase in numbers, technology and quality that the global audience had long been posing to better face the challenges of the 21st Century. And yet, the best known and most successful product to ever be conceived by CZ has mostly remained unchanged ever since it was first marketed in 1976, that being, when Czech Republic was still Czechoslovakia and the Česká Zbrojovka company was still owned by the Socialist State. That's when the CZ-75, probably the best pistol to have ever been based on the Browning working system was launched towards its destiny as a legend. 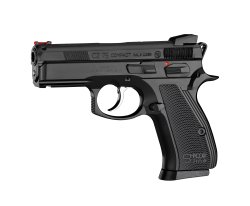 CZ manufactured the model 75 in at least one million samples, thirty variants and five calibers ever since; clones and modernized variants, mostly with polymer frames, are − or have been − also manufactured in fifteen different Countries, including Italy, Switzerland, and the United States. Countless armies and military units, Police forces and private security organizations around the world now use the CZ-75, and so do hundreds of thousands − if not millions − of sports shooters and simple citizens worldwide, who chose the CZ in their quest to find a reliable, pratical, performant instrument for target shooting, personal protection or property defense. The CZ company itself refers to the CZ-75 pistol as the "most successful pistol in the world, ever". As far as we're concerned, they may not be that far away from being right. The CZ-75 platform is still so technically valid that most of the new CZ pistols launched in the past years are actually nothing more, nothing else than CZ-75 knockoffs! 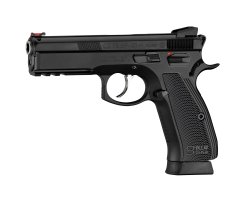 So to speak, even the P-07 and P-09 "Duty" polymer-frame pistols that now represent the backbone of CZ's line of pistols for Police and military service are nothing else but extreme modernizations of the project first conceived in the 1970s by Josef and František Koucký. Hence why, for the year 2013, CZ decided to propose yet another fine upheaval of the CZ-75, CZ-75 "Compact" and SP-01 pistols, some of the finest currently manufactured by the company and available on the global markets. Dubbed the Shadow Line the new series of CZ pistols were conceived and produced to meet the highest quality standards that shooters and professional operators learned to expect from CZ, and to provide astounding levels of performance with the minimum required amounts of modifications that would make them even more practical and easy to handle and operate. 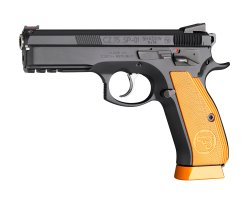 Česká Zbrojovka A.S.
This is the "Orange": just one of the CZ-75 "Shadow Line" pistols specifically conceived for shooting competitions

All the CZ-75 and SP-01 "Shadow Line" pistols come with a new hammer design, an ambidextrous, low-profile frame-mounted safety, checkered aluminium grip panels featuring distinctive, highly slip-proof textures, high-visibility iron sights (adjustable rear, Tritium insert front) and a chromed striker for superior resistance to use even in the harshest environmental conditions. All the CZ-75 and SP-01 "Shadow Line" pistols come in 9mm caliber: full-size variants will fit 17-round double-stack magazines, while the sole CZ-75 Compact Shadow Line variant will feature a 14-rounds magazine and front slide serrations. Last, but not least, two fancy competition-grade versions of the SP-01, respectively dubbed the "Orange" and the "Gold", will come with orange or bright yellow grip panels and magazine pads. CZ is currently shipping the CZ-75 and SP-01 "Shadow Line" series of pistols in many Countries, with the U.S. market absorbing most of the manufactured samples − hence why there may be shortages in certain places. Perspective buyers should contact their local retailers, or their national authorized CZ importer, to inquire about local availability and pricing; all purchases should always be done following local laws and regulations.