It's not widely known, but a French company - Chapuis Armes - is still manufacturing the legendary MANURHIN line of revolver

A contribution from Pierangelo Tendas10/01/2013

In the second half of the 1970s, the Police forces in north America adopted a new tendence that would start a slow and painfull process, ending up in the replacement of all service revolvers with semi-automatic pistols as their standard service sidearms; of course, at the end of the 1970s, the choice was pretty much limited: Colt 1911-A1 and Browning High Power models, mostly. At the same time, however, the French law enforcement community went the opposite way, as many of the semi-automatic pistols then in service, manufactured either in France or in Germany and chambered for the 9x19mm, .32 ACP and 7.65 MAS Longue  calibers − some of which were kept on duty ever since before World War II! − were replaced with the legendary MANURHIN large-caliber, double-action revolvers manufactured by a local company, headquartered in the Region of Alsace. First launched in 1973, the MANURHIN revolvers − most notably the iconic MR-73 model − are still highly regarded for their extremely high quality levels and their undeniable performances in accuracy, range and stopping power. Their international market success was immediate, and mostly unexpected.

The revolvers manufactured by the MANURHIN company remained in production, and in service, for over two decades, in a plethora of models conceived and manufactured for service, defense, open and concealed carry, sports purposes and export. Both the French Police Nationale and Gendarmerie Nationale adopted them, and so did the EKO-COBRA counterterrorism unit of the Austrian Ministry of Interior, and the military and Police forces of about ten Countries in French-speaking Africa. The MANURHIN company kept its revolvers in production up until halfway through the 1990s, including modernized and left-handed versions in several barrel lenghts and various calibers available, ranging from .357 Magnum to 9x19mm, from .22 Long Rifle to .32 Smith & Wesson Long. Despite the fact that the MANURHIN company itself has long time folded, the market brand is all but dead, and neither is the revolvers line: the Chapuis Armes group, a well-known French manufacturer of hunting rifles and shotguns, has picked up the manufacturing capabilities and the Know-How to keep the MANURHIN revolvers line on the market.

Currently, the Chapuis Armes group manufactures the MANURHIN revolvers line through the Manufacture MATCH, a fully-owned subsidiary. Chapuis' MANURHIN revolvers are made in three basic variants: the quintessential MR-73 in .38 Special and .357 Magnum calibers, fully manufactured out of blued stainless steel and available in the 3" and 4"-barrel Gendarmerie versions and in the 5" and 6"-barrel Sport versions; the MR-32/MR-38 "Match" 5" or 6" barrel versions for target shooting, available in .38 Special and .32 Smith & Wesson Long calibers; and the fully stainless steel MR-88, offered in both right-handed and left-handed variants and in two calibers (.38 Special and .357 Magnum), with four barrel lenghts ranging from three to six inches. This last model is a new-manufacture version of the RMR "Ruger-Manurhin" revolver, offered to the French Police Nationale from 1981 to 1984 and manufactured by MANURHIN following a joint-venture with the US-based Sturm, Ruger & Co. firm to conceive and produce lower-cost service guns. 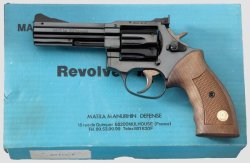 Hermann Historica oHG
Despite the sorry state of the French arms industry, the classic MANURHIN revolvers line lives on in modern times

Currently, the Chapuis Armes group manufactures the MANURHIN revolver line on a small scale, almost only under direct order. The manufacturer's suggested retail price for these revolvers may vary, although they're generally quite high, as in Europe they range from about 900€ for the MR-88 to 1600€/1700€ for the MR-73, MR-38 ed MR-32 models. That's definitely not cheap for a defensive gun − revolvers are still pretty much popular worldwide for personal defense, property protection and service purposes, particularly between private security personnel − but note should be taken of the fact that the quality level for the Chapuis-MANURHIN revolvers is extremely high − so to speak, a Chapuis-MANURHIN revolver is more akin to a Korth than to a Smith & Wesson − and that these guns are very sought after both by collectors and sports shooters, as they perform greatly at the range! Perspective buyers should inquire for availability and pricing of the Chapuis-MANURHIN revolvers with their local distributors: a comprehensive list of authorized worldwide importers and resellers is available on the Chapuis Armes group website.