After the safety recalls some years ago, Caracal USA has announced the availability of a “Limited Edition” of its 9mm Caracal Enhanced F pistol featuring US-made slides. 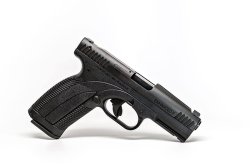 Caracal EF is a striker-fired, polymer-framed 9mm pistol. Here is the version with the Quick Sight System.

In the last few years Caracal handguns did not receive, to put it mildly, good press. Headquartered in Abu Dhabi, in the United Arab Emirates, Caracal International is the region’s leading original equipment manufacturer and its goal is to be the leading small arms manufacturer in the Middle East, offering an advanced catalog of firearms. Unfortunately, the recall in 2013 of all their Model C and F pistols was a real PR disaster. The recall reasons were related to some serious safety problems, i.e. reports of slides breaking apart when the pistol is fired and malfunctioning drop safeties.

Since the term “catastrophic failure” is never good advertising, it took quite some time before these polymer framed, striker fired handguns made in the United Arab Emirates could come back to the market. Only in October 2016, the company stated it was importing in the US Enhanced F (“Caracal EF”) pistols as replacements for its customers subject to the 2013 recall.

A Limited Edition for Caracal EF

As you can read in their website "the Enhanced F is a fundamentally new weapon which has been extensively tested to the harshest conditions and recognized standards”. And a few days ago Caracal USA announced the availability of a Limited Edition of the Caracal Enhanced F Pistol for sale at select FFL dealers in the US, starting July 4th – Independence Day. In a smart PR move, they chose the date that the United States of America celebrates its independence to reenter the US handgun market. 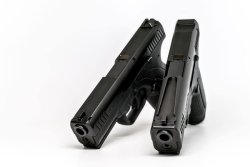 "Quick Sights” on Caracal's Enhanced F pistol (on the right).

The Enhanced F – Limited Edition pistol is a striker-fired, polymer-framed 9mm pistol comprised of a Caracal International frame with a Caracal USA slide - even if the company does not expressly state where the frames are being made - and is assembled in the United States. Caracal USA states that later this year they will offer guns with frames made in the United States. Other features are  a crisp, short double-action trigger, an 18-round magazine and 3 dot sights. You can also have the Caracal's proprietary “Quick Sight System” which places both the front and rear sights on a single focal plane allowing the shooter – according to the producer - to acquire a clear flash sight picture on target extremely fast. Apart these details, apparently there are no other differences between the limited edition and standard Enhanced F pistols. The handgun features a low bore axis which generates better instinctive shooting and low profile slide which gives less felt recoil to the operator.

The Enhanced F pistols will be available only through a select number of dealers and will be shipped in a Caracal branded hard case with 2 magazines, an Otis cleaning kit, cable lock, and a user manual.