The Cabot Gun Company introduces the latest matched pair of Jones 1911 semi-automatic pistols: "The Left and The Right", inspired to the ongoing debate over gun control in the United States

The most faithful all4shooters.com readers and followers should by now be familiar with the name of the Cabot Gun Company, whose products we sincerely admire although − unfortunately − theyre still not available in the Country we operate from. The Cabot Guns company is not huge, but it's highly dynamic and masters both the latest manufacturing technologies and the art of handcraftmanship, which led to the creation of a line of extremely high-grade 1911 derivatives, both highly regarded collectors pieces and fine performers at the range, with "beyond Custom" accuracy.

As a matter of fact, ever since the first Jones 1911 − Cabot Guns' baseline pistol named after Carl Jones, the founder of the Penn United Technologies consortium that owns and operates the Cabot Gun Company − Cabot's pistols have been brought to the range by a plethora of high-level sports shooters, including 2012 and 2013 NRA National Pistol champions. Cabot Guns is however mostly known for its most unconventional creations, ranging from left-hand configured pistols to highly engraved collectors' editions and even matched pairs.

One of the Company's latest, most unusual creations is a matched pair indeed, and has gained attention at the 2014 SHOT Show in Las Vegas (Nevada, USA) and in the following months. Dubbed "The Left and The Right", this matched pair might be considered a peak in Cabot Guns' creations − and rightfully so.

This matched pair of 1911-A1 type, .45 ACP caliber single-action semi-automatic pistols − both perfectly working and extremely reliable and accurate in operation − has been conceived as a work of art inspired by the ongoing debate over gun control in the United States, that has been  dividing America's public opinion for years now and particularly ever since the Sandy hook Elementary School shooting of late 2012. Although there's no doubt about whose side the Cabot Gun Company supports, "The Left and The Right" is intended to portray the debate artistically and in a most neutral way, as a homage to the American democracy that allows this kind of debates to actually take place and prevents "sweeping" legislation to be enacted single-handedly.

Each one of these two pistols is a perfect mirror image of the other: not only all controls and the ejection window are reversed, but so also is the barrel rifling. Furthermore, both handguns feature a skeletonized hammer, a perforated trigger with star-themed holes, and decoratively-realized front and rear slide serrations.

However, the focal point of each pistol are the burin (Scrimshaw) engraved grip panels, featuring the effiges of notorious political or showbiz persons that stand either for or against gun control, along with depictions of the current and Revolutionary U.S. flag and of the Bill of Rights.
More specifically, "The Left" pistol portrays Barack Hussein Obama, incumbent President of the United States of America, and Piers Morgan, former CNN anchorman and a staunch supporter of British-style gun control.
"The Right" model instead features effiges of former U.S. President George W. Bush and Ted Nugent, a popular singer and songwriter who's also an avid sportsman and gun owner and an all-out supporter of gun rights, which led him to harshly debate with Morgan himself on the matter several times in the year 2013. 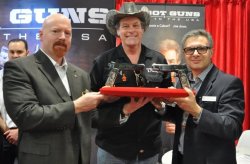 "Ballistic art": that's how Ted Nugent refers to this beautiful matched pair − and rightfully so, as expert S.P. Fjestadt states that the Cabot Guns 1911s offer the Cabot Guns "the quality of a Rolls Royce and the accuracy of an atomic clock".

What's next for this marvelous matched pair? Nobody knows for sure: it is not for sale, nor has it ever been, and unless the company changes its mind − or unless demand for it gets serious − "The Left and The Right" will probably remain a highly collectible one-shot. Estimated value for the pair tops 100.000 US Dollars. 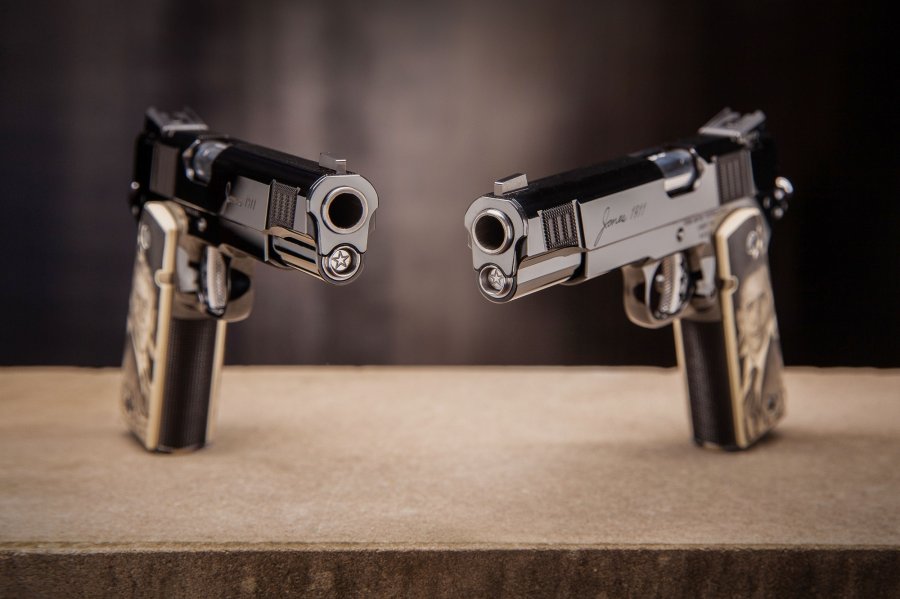 Cabot Gun Company, LLC.
This debate is yet another proof of how great American democracy is -- and "The Left and The Right" pays a due homage to the principles that made "The Land of the Free" great!
Subscribe to the Newsletter
Click here for more information on the topics:
Pistols
That might interest you too: