Thereʼs a new kid in the block, and itʼs ready to make sensation: itʼs the “Strike One”, the eagerly awaited innovation from ARSENAL FIREARMS!

“Innovation” in the firearm sector is not always THAT innovative: we are often left marveling at things that would later prove to be nothing more than new and shiny packages for old and (often) abused concepts and products. The “true innovations” are not to be seen very often, and even when they pop out, they are difficult to spot in the generally chaotic picture of the gun market. This time, however, all4shooters.com can really announce to our long-time readers that we really have a true, big-time innovation.

The year 2012 saw a new entry in the firearms sector, the Arsenal Group of Companies, unique for its foundations and its product catalogue. The Arsenal Group has been created out of the impulse of two gun geniuses at the same time very differend and very akin: our very own Italian Nicola Bandini, and Dimitri Streshinsky, the now legendary Russian handcraftsman with over thirty years of experience in firearm research and in creation of perfectly operational, absolutely perfect miniature firearm replicas.

The flagship of the Arsenal Firearms line, to be distributed starting fall 2012, is the AF-1 “Strike One” semi-automatic pistol, conceived for defense use, service and dynamic sports shooting (i.e. IPSC - International Practical Shooting Confederation). Described by the company as “the fastest-shooting service gun available on the market today”, the “Strike One” has been conceived in the most typical of modern pistol layouts, that is, with metal slide mounted on a polymer frame equipped with a MIL-STD-1913 Picatinny rail for tactical accessories. Such a generic description, however, could erroneously lead our readers to mistake the “Strike One” for “just another polymer pistol”. That is definitely not so.

The “Strike One” boasts in fact a plethora of unique features, starting with a single action-only trigger actuating a pre-loaded internal striker beginning with the single action operation with internal percussor that operates horizontally; the entire system works in fact in-line, since the barrel is kept at an extremely low axis and prevented from tilting up through a locking notch located just forward of the trigger group. Other than just reducing recoil and muzzle climb to a minimum, this system eliminates the need for any technical solution that would result in a sluggish trigger pull. The trigger weight and the reset lenght are kept at a minimum, the locking system is extremely fast and the striker release is quick and sharp.

The in-line barrel system has allowed Arsenal Firearms to develop a wide array of accessories and optionals for the “Strike One” to make it a suitable tool for almost all shooting needs; this includes the LRC (Long Range Conversion), a conversion kit that features a long fluted barrel and a quad-rail interface system realized out of machined aluminium that turns the standard pistol into an excellent machine for particular competitions, such as the metallic Silhouette target shooting.

Other than just in a five-inch BBL variant, the “Strike One” will also be released in a “Combat” variant, featuring a 13 centimetres-long cold hammer forged barrel for professional and defense use. The barrel and its locking notch, the slide guides and the firing pin are all treated with nitric 75Hrc coating to ensure an >50,000 rds service life. 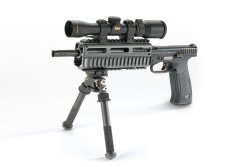 Arsenal Firearms S.r.l.
A “Long-Range Conversion” for special applications and for sports shooting (es. target competitions) is available for installation on the AF-1 “Strike One” pistol

The 42CrMo4-steel-reinforced polymer frame also sports many innovations, featuring long guides to improve resistance and control of all moving parts, from pins to springs. The frame is the only one in existence today to be actually manufactured in “3D”: this is how the manufacturer explains that the ergonomically-shaped grip is obtained by modeling and molding during the production phase of the entire frame, while other polymer-frame pistols have it refined in a second phase by removing material from the flat surface of a semi-worked polymer block. One more characteristic feature of the “Strike One” is the integrally-beveled (a.k.a. “IPSC-style”) magazine well to ease quick reload; this is the only defence/service pistol to integrate these features, that is, to beas easy and confortable to handle and as fast to reload as a race gun; undeniably, a great advantage for tactical operators (Law Enforcement/Police SWAT-type units, military SpecOps) which may potentially find themselves in need to perform a high-speed reload in combat stress situations.

The universal-type frame, dimensioned to 9mm-caliber rounds, can mount barrels and slides to adapt the “Strike One” platform to each one of the four available calibers (9x19mm “Parabellum”, 9x21mm “IMI”, .40 - Smith&Wesson, .357-SIG). The magazines of the “Strike One” might appear conventional, but once again, for the first type in firearms history, they feature a truly ambidextrous release capability in the form two slots which are engaged by a double notch when inserted. Said notches are located at the two extremities of the upper part of a T-shaped metal spring-type system that is seated inside the front portion of the grip and accounts alone for the entire magazine retention/release system. Magazine ejection is actuated through a small spring-loaded metal rod that protrudes on both sides and works as an ambidextrous release push-pin control: a revolutonary release system basically composed of only two parts (the retention/release T-shaped metal bar and the double push-pin actuation rod), requiring no conversion to be truly ambidextrous, and easy and fast to disassemble for ordinary or extraordinary maintenance without the need for specific tools; when engaged, the system will securely grasp on both locking slots on the magazine surface, granting a high level of retention an preventing accidental release even in the event of a strong shock or impact. 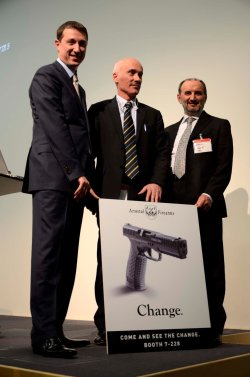 all4shooters.com
Left to right: Dimitri Streschinsky, Nicola Bandini and Massimo Tanfoglio, founders of Arsenal Firearms, the new kid in the block of the international gun industry

The “Strike One” working system is the real innovation brought by Arsenal Firearms, representing a unique breakthrough in firearms industry, based on the DOF (degrees of freedom) principle of mechanics. The DOF is the number of parameters that define the configuration of a mechanical system, where the degrees of freedom of a body represents the number of independent parameters defining the displacement and deformation of the body itself; according to this principle, all the main components of the “Strike One” (the slide, the barrel and its locking lug) only have one degree of movement, that is, that are only able move along only one dimension (a.k.a. surging, moving rearwards and forwards).

Most of the above-mentioned features of the “Strike One” system are directly linked to this principle: the limited rearwards/forwards movement of the barrel that remains in line with the frame, its very low tolerance and the 12mm bore-to-grip axis, the lowest in firearm history, strictly implying a closer alignment with the sights and directly translating into increased accuracy; a drastic reduction of the moving weights (only the barrel locking lug moves, not the entire barrel), with a sunsequent drastic acceleration of the working cycle; high ramp feeding and chambering dependability, guaranteeing safe and correct chambering no matter what kind of ammunition is employed; an almost “airtight” seal between the slide and the barrel to prevent external elements from entering the system, leaving just the right amount of space to let the barrel unlock when the gun cycles; and reinforcements on the slide structure itself around the ejection window, one of the most “sensitive” areas in a firearm.

The barrel locking lug is secured to its seat in the frame by a mere 4mm retention pin, whose removal through any kind of sharp object is basically all it takes to field-strip the “Strike One”; this, because, as stated above, this is the part that moves during the firing cycle, retaining the barrel fixed and in line with the slide and the barrel; and it doesn't even reaches the end of its potential travel all throughout the cycle, meaning that it has to bear barely 25 grams of weight/force, which increases its operational life, while the elements that cover this role in the Browning system-based pistols must sustain a force that often exceeds 120 kilograms by each shot, and need a 5mm retention pin. The position of the locking block (aligned and in front of the trigger group, not over it) also contributes in keeping the height of the “Strike One” to a minimum: total locking surface for the “Strike One” pistol amounts to 24 square millimeters, definitely the tightest in firearms history.

The AF-1 “Strike One” pistol features no external safety, relying itself on an automatic, internal strike safety and a trigger safety that works on the same principle of, yet is totally different from, the ones used on most of the most direct market competitors (i.e. Glock, Springfield XD/HS2000, Caracal), which use an additional frontal piece on the trigger. The “Strike One” features a single-piece trigger with an internal safety system based on a rotating mechanism that will not allow an internal shoulder to engage the transfer bar and release the striker until reaching the end of its travel, which can happen only if an uniform degree of pressure is exerted on both the upper and the lower portion of the trigger, that is, only if the trigger is pulled deliberately and properly. Accidental discharges by the small hands of a child or by a foreign object that gets entangled in the trigger guard is thus made virtually impossible, and at the same time a proper pressure on the trigger will result in a safe, sure and accurate discharge, as it would be expected from some of the best competition pistols, with higher first-shot target placement capabilities than any other service/defense sidearm available on the market today.