After causing so much hype since their inception in mid-2012, the Italian-Russian joint venture is ready to launch their guns on the market! 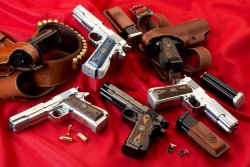 Gianni D'Affara
Arsenal Firearmsʼ AF2011-A1 “Second Century” double-barrel pistol is probably one of the most interesting guns to come out in decades!

The Arsenal Firearms Group of Companies, headquartered in Gardone Val Trompia (Italy) and in Moscow, Russia, is probably now one of the most dynamic small realities on the market to come out in years. Gone public at the 2012 edition of the IWA expo in Nuremberg, Germany, Arsenal Firearms spent the following twelve months to pump up the required manufacturing capabilities to launch on the market its impressive lines of products whose introduction caused so much hype in the firearms market all through last year. After their products were first showcased to the American public at the 2012 edition of the NASGW expo and annual meeting and at the 2013 edition of the Las Vegas SHOT Show, the company is finally ready to take on the global market in a well-deserved way. 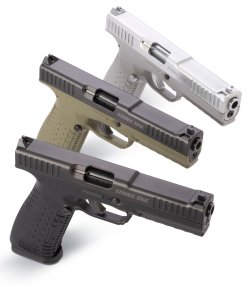 Arsenal Firearmsʼ most innovative product is definitely the AF-1 “STRIKE One” semi-automatic, striker-fired, locked-breech blowback-operated pistol. Chambered in 9x19mm, 9x21mm-IMI, .40 - Smith & Wesson and .357-SIG, the “STRIKE One” is based upon a polymer or ERGAL aluminium alloy frame with integral feeding ramp for additional reliability and sports a 5-inch barrel secured to the frame through a separate locking piece located in front of the trigger group, which allows the gun to maintain one of the lowest grip-to-bore axis on the market and will prevent the barrel itself from pivoting or tilting, only allowing it to partially recoil recoil back along with the slide for maximum recoil reduction, stability and firing speed: a system specifically engineered to help the the platform to maintain the exact same accuracy levels no matter the barrel lenght, paving the way for the production of compact or subcompact variants in the near future. The AF-1 “STRIKE One” also features fully ambidextrous magazine release controls and a double-stage trigger system in which the first part is pivoting and works as an automatic safety, while the second one is sliding and is what actually causes the gun to fire.

Arsenal Firearmsʼ most notorious and talked-about product is however by far the “in-famous” double-barrel AF-2011A1 “Second Century” semi-automatic pistol. It is built basically as two 1911-A1 pistols in one, with a double slide, a double frame, a double trigger activating the same sear, a double hammer with a single spur which will strike on two separate strikers, and of course a double barrel and a double magazine with a single magazine pad that holds them together. The AF-2011A1 “Second Century” fires reliably two rounds of .45 ACP or .38-Super Auto ammunition at once − with one barrel having some milliseconds of delay from the other − and the added weights and mass allow the shooter to always maintain control on the impressive cycle. 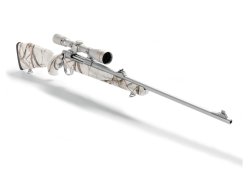 Other products that the Arsenal Firearms Group of Companies is expected to launch on the market include the “Legend” series of highly tuned bolt-action hunting rifles, available in a plethora of calibers and variants, and a line of tactical knives. The Arsenal Firearms Group of Companies already owns the Italian-based Zanotti firm, manufacturer of hand-crafted, artistic custom-grade fine guns for hunters and collectors. Arsenal Firearms has already appointed distributors for the worldwide markets, while the distribution in Europe and Russia will be managed by the company itself. Further informations about the commercial availability of Arsenal Firearmsʼ products are slated to be released next March, at the IWA expo that will take place in Nuremberg, Germany.