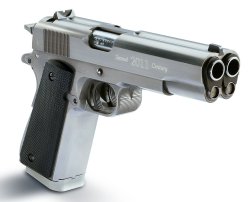 Arsenal Firearms, S.r.l.
Months of doubts ended last November 7th, with the BATFE granting official permission of import and marketing of the AF2011-A1 “Second Century” double-barrel pistol in the U.S.

Great news for all the American gun enthusiasts who followed closely the developments proposed by the Italian-Russian Arsenal Group of Companies - Arsenal Firearms S.r.l. after its worldwide launch at the 2012 IWA expo in Nuremberg, Germany. This newborn company also showcased its products, the polymer-framed AF-1 “STRIKE One” semi-automatic pistol and the astounding double-barrel AF2011-A1 “Second Century” pistol at the 2012 editions of EXA in Brescia (Italy) and NASGW in Orlando (Florida, U.S.A.). The AF2011-A1 “Second Century” has definitely since been the most appealing offering of the Arsenal Firearms company, with thousands worldwide looking forward for its launch. News had not been good for several months; multiple inquiries submitted to the U.S. Bureau of Alcohol, Tobacco, Firearms and Explosives (BATFE) all returned the same negative response: being it a firearm capable of shooting more than one single round for each pull of the trigger, the AF2011-A1 “Second Century” would be classified as a machinegun, thus banned from private ownership in the U.S. as per the provisions of the Hughes Amendment to the 1986 Firearms Ownersʼ Protection Act (FOPA). More or less at the same time, Italian authorities themselves banned the AF2011-A1 “Second Century” double-barrel pistol from the national civilian market for the same reason. 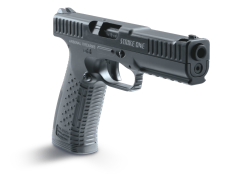 Arsenal Firearms, S.r.l.
The AF-1 “STRIKE One” combat pistol is yet another product that the Arsenal Firearms Group will launch on the U.S. market at the 2013 SHOT Show

As an official media partner to the Arsenal Firearms Group, All4shooters.com joins the Company in thanking warmly the millions of followers, enthusiasts and supporters in the United States of America and worldwide: they are part of the dream and indeed the main reason to be for both the Arsenal Firearms group and us.