From the Philippines comes the Armscor  STK100, a 9mm striker-fired pistol featuring an aluminum grip frame. This is definitely a choice that goes against the current trend, and one that will be appreciated by those who don't like the excessive use of polymer.

A contribution from Giorgio Brancaglion06/26/2021

“The advantages of metal for the price of polymer”: this is the claim with which the Philippine company Armscor – until now known mainly for its Colt 1911 style pistols – has introduced its new semi-automatic STK100 on the market. In fact, the choice to make a gun based on the now indispensable striker-fired system but without a polymer frame is certainly bold and could also be somewhat successful, since the Armscor STK100 is actually offered at an interesting price point: 599 US dollars, that at current exchange rates are about 495 euros. A clarification is needed: Philippine-based Armscor holds manufacturing contracts for other companies' firearms, including Rock Island Armory (RIA). That's why the STK100 is marketed under both the Armscor and Rock Island Armory brands.

But let's start from the beginning and take a closer look at this full-size gun. 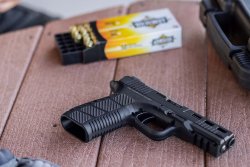 The Armscor STK100 is a striker-fired semi-automatic pistol in 9mm Luger caliber with DA/SA action. The slide, designed for direct mounting of an optic, is made from carbon steel with milled serrations on both ends. It features some lightening cuts in the front. The pistol is factory fitted with a fixed rear sight, integrated in the plate that covers the milling for the optics, and an interchangeable front sight. The sight radius is 7.9”/201 mm. The STK100 can mount the sights already on the market designed for GLOCK pistols. The barrel measures 4.5”/114 mm, with conventional six-groove right-hand rifling and 1:400 mm twist.

The grip frame is made of aluminum with integral grips and allows the pistol to keep its weight at 28.92 oz/820 g, an acceptable value for prolonged carry but still more effective in reducing felt recoil when firing than a polymer frame. On the dust cover there is the mandatory Picatinny rail for mounting of accessories.

The grip surfaces have textured and grooved areas for a better purchase. A short beavertail prevents the back of the hand from coming into contact with the slide when it moves backward under recoil. The frame sports a matte anodized finish that could trick a distracted eye into perceiving it as polymer. As for the controls, the magazine release button is reversible, while the slide stop lever is on the left side only. To disassembly the gun, you must operate a GLOCK-style takedown lever. There is no mention in the Armscor STK100 press release that the gun can be disassembled without pulling the trigger, so we believe this is not possible. The double-stack polymer magazine has a capacity of 17 9mm cartridges. The trigger has the usual automatic safety; the trigger pull weight in double action is 112.17 oz/3.18 kg, while in single action a weight of 40.07 oz/1.36 kg is enough to release the shot.

We are looking forward to testing this somewhat unusual gun. For the moment being, we invite you to visit the Armscor website.

Subscribe to the Newsletter
This article is also available in this language:
IT
Click here for more information on the topics:
ARMSCORPistols9 mm