The new gun control measures hastily pushed into effect in some U.S. States in the aftermath of the Sandy Hook Elementary School shooting are now taking their toll in terms of job losses and lack of tax income for the States that implemented them

In recent months, several traditionally anti-gun states, and Colorado, have enacted laws that abuse the rights of the average citizen and offend their corporate citizens. The situation has led to an exodus of gun manufacturers to more friendly climes, with anti-gun states losing the significant tax revenue and jobs these companies provide.

Amongst the companies that have chosen to relocate is MagPul Industries of Erie (Colorado), probably the world's best known manufacturer of AR-15 parts, tactical accessories, and magazines. Last February, MagPul warned the State of Colorado that the company would move if legislation banning standard capacity magazines (also dubbed "high-capacity magazines" in the anti-gun propaganda) was ever to pass. In March, a ban was signed by John Hickenlooper, Governor of Colorado, and as such MagPul set out in search of a new home − possibly in Texas. 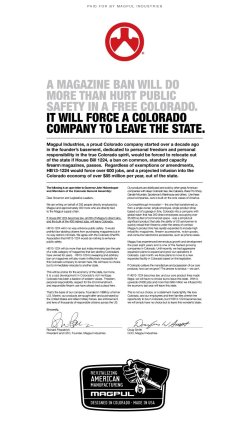 MagPul, Inc.
Some companies - like MagPul - had previously warned their State legislatures that passing gun control measures would have prompted relocation of their businesses

Another "refugee" is Kahr Arms of Rockland County (New York). Following New York’s enactment of the so-called S.A.F.E. Act, Kahr announced that it would be moving some of its operations from the Empire State to more gun–friendly Pennsylvania. Prior to New York’s new law, Kahr had been considering building a new facility, with 80-100 additional jobs, in Orange County, NY. When asked about the move by the Wall Street Journal, Kahr Vice President of Sales and Marketing Frank Harris said of New York, “We don’t feel welcome.”

PTR Industries, a maker of semiautomatic rifles in Bristol (Connecticut)., has also chosen to move. In reaction to Connecticut’s recently enacted legislation, the company confirmed in June that it would be moving to Aynor, South Carolina. Similarly, fellow Connecticut gun maker Stag Arms and the Palmetto State have shown mutual interest. Other manufacturers, such as Sturm, Ruger & Company and Beretta USA, have sought out firearm friendly states for their expansion plans, with Ruger opening a new plant in North Carolina. Even the Remington Arms Company, which has built firearms in Ilion (New York), for over 150 years, is reported to be looking to move part or all of that operation to a gun-friendly State.

Manufacturers looking to move or expand are in a buyer's market, as several States have rolled out the welcome mat. Back in June, the Hartford Courant detailed recruiting trips by fervent gun rights supporter and shooter, Texas Gov. Rick Perry, and South Dakota Gov. Dennis Daugaard, who were seeking to convince Connecticut manufacturers of the virtues of their States. Stag Arms CEO Mark Malkowski told a reporter for the National Review that the company had received “about one hundred offers” to relocate.

It is not surprising that the radical anti-gun legislatures and governors in these States failed to consider the impact these extreme new laws would have on businesses and the jobs they support. Restricting the Second Amendment rights of law-abiding Americans is a far more important goal to these politicians than protecting the jobs of their constituents.

Fortunately, the U.S. federalist system gives people and businesses the opportunity to locate in states that continue to respect the individual rights of Americans and that best represent their economic interests.