Firearms United - a new, Warsaw-based pro-gun organization - urges gun owners from all Europe to adhere to a mass protest against the latest "White Paper" from the European Commission demanding stricter gun control 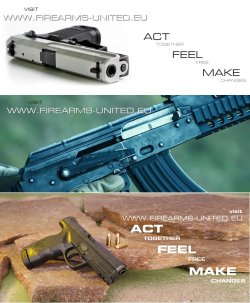 As you may remember, on October 21st, the European Commission released a "White Paper" titled "Firearms and the internal security of the EU: protecting citizens and disrupting illegal trafficking"; supposedly basing itself over the results of the poll launched by the European Commission itself last April, it actually provides a distorted version of these, and upon these false data it calls for more stringent, almost draconian restrictions upon the rights of law-abiding European citizens to keep, bear, and use firearms for hunting, sports shooting and − most important of all − self-defense and the protection of their properties and their loved ones.

The "White Paper" caused a major outcry between hunters, sports shooters, and generally speaking, gun-owners Europe-wide, as it configures as nothing more, nothing less than as yet another attempt from a central authority to restrict the rights of the European citizens, both as individuals and as parts of a collectivity − putting a particular accent upon gun rights, which is what actually allows citizens not only to be safe, but to act as guardians of democracy should the need arise.

A particularly high level of discontent is being now registered in France − a Country that has lately approved less strict gun laws, and that also counts the highest overall number of active hunters in the entire EU − and in Sweden, as Swedish citizens are not only avid and very active hunters and sportsmen, but are also fellow citizens with Cecilia Malmström, the current Commissioner for Home Affairs of the European Commission. Cecilia Malmström comes from the centre-right FP - Folkpartiet Liberalerna (Swedish Liberal People's Party), and is Europe's staunchest enemy of gun owners and gun rights. 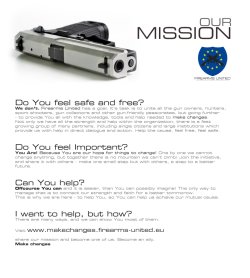 A call to action against this attempt to takeour rights away comes now from Firearms United, a new name in pro-gun rights organizations.

Headquartered in Warsaw, Poland, but composed of "thinking minds" from entire Europe, Firearms United aims to become a beacon for all European gun owners and their national organizations, so to coordinate Europe-wide efforts to conserve and restore our gun rights and finally constitute a true "gun lobby", a movement of gun owners and shooters themselves rather than just gun manufacturers, distributors and retailers as it largely up to now.

Firearms United has been launched pretty recently, and still needs time to grow strong and show its full potential; it has already demonstrated to be young at heart and action − its presence on Social Networks speaks by itself − being the first pro-gun organization in Europe to employ communication strategies that have so far only been used by the NRA and other American pro-RKBA movements, and promoting a program that's sure to quickly throw a monkey wrench in the works not only of the European anti-gun front, but also of these parts of the gun industry itself that often side with the gun grabbers, trading our freedoms and rights for some sort of political protection or in order to harm the competition. 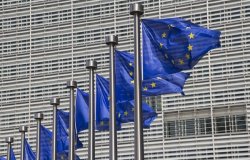 European Commission - Europese Commissie
Firearms United invites all European gun owners to adhere to the petition, by filling in the letter, signing it and mailing it to Commissioner Malmström

Firearms United is currently asking all gun owners in all European Union member Countries to adhere to their protest by  filling, printing and signing a letter in which any supporter will show its discontent with the European Commission's anti-gun White Paper and will directly ask Home Affairs Commissioner Malmström to provide the data upon which said document is based − so that the distortion of truth and bluff of the European anti-gun movement will finally be unveiled. The letter must then be mailed to the address reported on top of the document.

By European regulation, the EU institution can not ignore the requests, the protests and the proposals coming from European citizens − unlike what sadly often happens with the public offices and the Governments of individual member Countries − and they have a legal obligation to positively answer within fifteen days from reception. This means that they will not be able to ignore the voice of hundreds of thousands − or possibly millions − of European citizens, and that at least this will give the gun grabbers in Brussels and Strasbourg a clear idea of how many people they will be pissing off should they refuse to cease and desist from their attempts of imposing an Europe-wide gun control. The politicians attempting to achieve a comprehensive gun control for all Europe through EU must know that their attempts will be punished at national level, as the Parties they're part of will be voted against by hunters, sports shooters, and generally speaking by all gun owners.

We thus warmly encourage you, dear ALL4SHOOTERS.COM fans and followers, to adhere to the Firearms United campaign and to send a letter to Commissioner Cecilia Malmström. The .PDF form with the pre-compiled letter can be downloaded from either the Firearms United website or from the link at the bottom of this page; you'll just need to put in your name, your Country, and your signature, and you're ready to go. Since the European Union can not, by its own rules, ignore the voice of millions of European shooters, we should take the chance and show how strong we can really be if we all stand together.

Click here to download and fill in the protest letter to be sent to the European Commissioner for Home Affairs, Cecilia Malmström (.PDF, English)