A few thoughts about the U.S. and Christopher Dorner's criminal spree. How radical can anti-gun activism become? How far could an anti-gun activist go? Possibly, as far as to commit a massacre in order to push stricter gun control regulations? Human tragedy or political strategy? 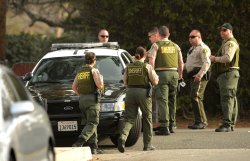 The global media is currently covering the killing frenzy of 33-years-old Christopher Jordan Dorner, a former U.S. Navy reservist and Los Angeles Police officer from 2005 to 2008. On February 3rd, Dorner killed 28-year-old Monica Quan, and her fiancée, 27-year-old Keith Lawrence − Quan being the daughter of former LAPD captain Randal Quan, who formerly represented Dorner during Dorner's dismissal hearing from the LAPD. On February 7th, Dorner opened fire at two LAPD officers, grazing one's head, and shortly thereafter ambushed a Riverside Police Department cruiser, killing an officer and wounding another. Ever since, the Mass Media have been publishing parts of Dorner's 11,000 words long "Manifesto", which was published on the Internet and . However, reading the entirety of the unredacted document (available for download as a .PDF here, just in case it is pulled from the Web), law-abiding and responsible, peaceful gun owners and shooters might find a reason to be worried about the true motives of Dorner's actions, which may be slightly different from a personal vendetta. What follows is an extensive excerpt from Dorner's manifesto. 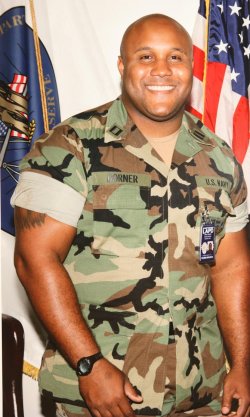 « If you had a well regulated AWB, this would not happen. The time is now to reinstitute a ban that will save lives. Why does any sportsman need a 30 round magazine for hunting? Why does anyone need a suppressor? Why does anyone need a AR15 rifle? This is the same small arms weapons system utilized in eradicating Al Qaeda, Taliban, and every enemy combatant since the Vietnam war. Don't give me that crap that its not a select fire or full auto rifle like the
DoD uses. That's bullshit because troops who carry the M-4/M-16 weapon system for combat ops outside the wire rarely utilize the select fire function when in contact with enemy combatants. The use of select fire probably isn'teven 1% in combat. So in essence, the AR-15 semiautomatic rifle is the same as the M-4/M-16. These do not need to be purchased as easily as walking to your local Walmart or striking the enter key on your keyboard to "add to cart". All the firearms utilized in my activities are registered to me and were legally purchased at gun stores and private party transfers. All concealable weapons (pistols) were also legally register in my name at police stations or FFL's. Unfortunately, are you aware that I obtained class III weapons (suppressors) without a background check thru NICS or DROS completely LEGALLY several times? I was able to use a trust account that I created on quicken will maker and a $10 notary charge at a mailbox etc. to obtain them legally. Granted, I am not a felon, nor have a DV misdemeanor conviction or active TRO against me on a NCIC file. I can buy any firearm I want, but should I be able to purchase these class III weapons (SBR's, and suppressors) without a background check and just a $10 notary signature on a quicken will maker program? The answer is NO. I'm not even a resident of the state i purchased them in. Lock'n'Load just wanted money so they allow you to purchase class III weapons with just a notarized trust, military ID. Shame on you, Lock'n'Load. NFA and ATF need new laws and policies that do not allow loopholes such as this. In the end, I hope that you will realize that the small arms I utilize should not be accessed with the ease that I obtained them. Who in there right mind needs a fucking silencer!!! who needs a freaking SBR AR15? No one. No more Virginia Tech, Columbine HS, Wisconsin temple, Aurora theatre, Portland malls, Tucson rally, Newtown Sandy Hook. Whether by executive order or thru a bi-partisan congress an assault weapons ban needs to be re-instituted. Period!!!» 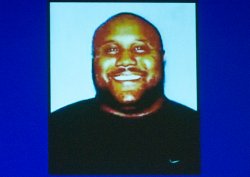 Associated Press
May the actions of the former LAPD officer Christopher Jordan Dorner, currently wanted for three murders, be aimed to push the U.S. into the forced adoption of a new assault weapons ban?

The frightening manifesto of he who could possibly be the first anti-gun mass murderer in history continues with words of praise for the Vice-President of the United States, Joe Biden, and for Senator Dianne Feinstein, who alone represents today the two main figures of the American anti-gun political movement:

«Sen. Feinstein, you are doing the right thing in leading the re-institution of a national AWB. Never again should any public official state that their prayers and thoughts are with the family. That has become cliche' and meaningless. Its time for action. Let this be your legacy that you bestow to America. Do not be swayed by obstacles, antagaonist, and naysayers. Remember the innocent children at Austin, Kent, Stockton, Fullerton, San Diego, Iowa City, Jonesboro, Columbine, Nickel Mines, Blacksburg, Springfield, Red Lake, Chardon, Aurora, and Newtown. Make sure this never happens again!!![...] In my cache you will find several small arms. In the cache, Bushmaster firearms, Remington precision rifles, and AAC Suppressors (silencers). All of these small arms are manufactured by Cerberus/Freedom Group. The same company responsible for the Portland mall shooting, Webster , NY, and Sandy Hook massacre.[...]Mr. Vice President, do your due diligence when formulating a concise and permanent national AWB plan. Future generations of Americans depend on your plan and advisement to the President.» 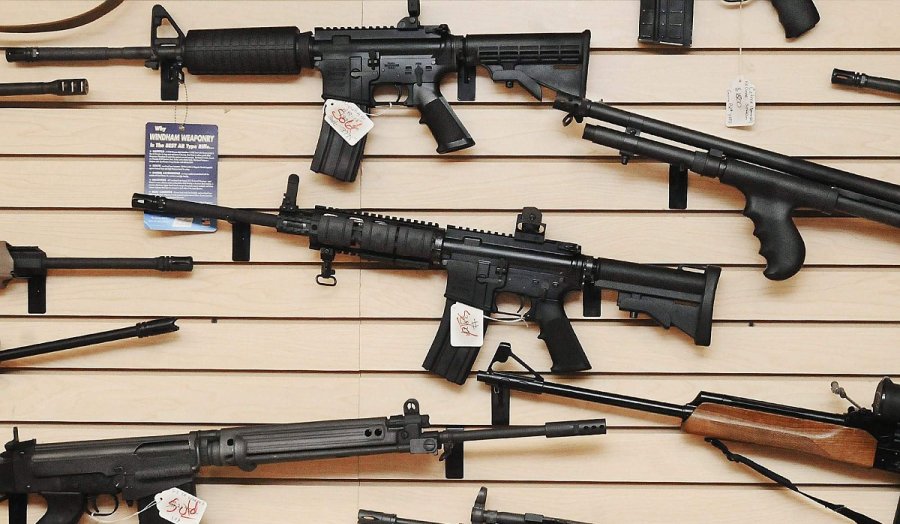 The Gazette
In his manifesto, Dorner puts all the blame for his own ongoing shooting spree to the so-called "Assault Weapons" - a derogative term used by the anti-gun lobby to address modern sporting rifles

Reading Donner's word, one could think − and rightfully so! − that his actions are not aimed to a vendetta, but to forcefully push the State of California, the United States of America, or both, into enacting sweeping "Assault Weapons Ban" and gun control laws. The shooter's hate against law abiding gun owners is made even more adamantly clear by the words he reserves in his "Manifesto" to Wayne LaPierre, Executive Vice-President of the National Rifle Association:

« Wayne LaPierre, President of the NRA, you're a vile and inhumane piece of shit. You never even showed 30 seconds of empathy for the children, teachers, and families of Sandy Hook. You deflected any type of blame/responsibility and directed it toward the influence of movies and the media. You are a failure of a human being. May all of your immediate and distant family die horrific deaths in front of you.»

All these parts don't appear in the "Dorner Manifesto" as has been circulating for a few days now. The Huffington Post and other online sources report them to have been in the "Manifesto" as published by Dorner himself on his Facebook page, before it was put down; since the inception of his shooting spree, at least five different persons set up phony Twitter accounts claiming to be Dorner, and posted parts of the "Manifesto". According to some sources, the unredacted version of the document resurfaced thanks to the efforts of Anonymous, the well-known net of computer Hackers, which lately released statements against all forms of gun control and started a massive "Operation Gun Rights". The "Dorner Manifesto" in the unredacted form, containing the hereby-quoted parts regarding gun control, has since been published by several mainstream media, including NBC and FOX. Important publications such as The Examiner and the Wall Street Journal now hint, if they don't outspokenly state, that the Los Angeles Police Department might have decided to publish only an extremely redacted variant of the "Dorner Manifesto", after seizing it for investigations, for reasons other than operational security. 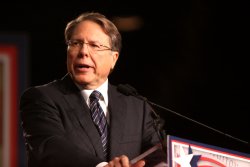 Gage Skidmore
The Dorner manifesto viciously attacks NRA executive vice-president Wayne LaPierre, addressing to him as a "failure of human being"

What should we conclude from the analysis of Donner's words? Many things, none positive for the gun control lobbies. Including the fact that he may not be the only anti-gun activist out there to start thinking that, maybe, going on a killing spree will serve his/her/their cause of pushing new gun control laws into effect by brute force. Not only Donner shows the quintessence of the typical anti-gun projection − blaming his guns, and their manufacturers, for the acts he is performing himself! − but tries to hide to the readers of his "Manifesto" the fact that having been a Los Angeles Police officer until 2008, and a member of the U.S. Naval Reserve until recently, he could legally access, simply showing his agency IDs, to all those firearms and accessories that the current regulation either already ban or severely restrict in California and elsewhere, according to the specific exceptions written in the local, State and Federal laws for the members of Law Enforcement and the Military. Furthermore, he addresses unspeakable words of hate to America's best known gun rights advocate; he is not alone in this, as one the CNN anchorman Piers Morgan, an outspokenly ferocious anti-gun activist, recently addressed to gun rights advocate Larry Pratt refering to him as "an unbelievably stupid man", live on national TV. May the anti-gun thought be actually more violent and intolerant that what anti-gun activists accuse gun owners to ever be? It's a legitimate question, now that we witness an anti-gun activist commit the very same acts of murder and violence that the gun control lobby generally accuses all legitimate gun owners of in order to justify their asinine law proposals. 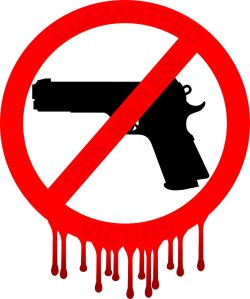 John Hardin
The anti-gun lobbies can be held responsible for the surge in crime rate in tightly gun-controlled jurisdictions. May they now have their hands dirty of blood... in a more direct way?

If this is the case, maybe it's the right time to expose the anti-gun lobbies as the true cult of hate and intolerance that they really are. Not only they will be now accountable for every single man, woman or child fallen victim to crime and violence in strict gun-controlled legislations as they could not defend themselves; not only they will now be accountable for the surge in violent crime in Australia and the United Kingdom after draconian gun laws were adopted in the 1990s; not only they will now be accountable for creating so-called "Gun-Free Zones", true defenseless shooting grounds for criminals and madmen. They will now be directly accountable for the acts of one of their activists who decided to commit the very same acts they condemn in order to make their ideas triumph. It's thus the duty of all law-abiding, peaceful and responsible gun owner and gun rights activist let this truth be known, so that these bankrupt ideas shall no longer plant roots into the mind of intelligent, acculturized and mentally sane people, anywhere in the world.