As the name implies, the CRKT Knife Maintenance Tool is designed for knife maintenance. Small, light and without frills, it has been awarded as the "tool of the year" at the 2018 Blade Show.

The CRKT Knife Maintenance Tool was designed by Tom Stokes, a mechanical engineer with over twenty years of experience in aerospace industry who has been collaborating with the Tulatin-based company for more than ten years.

Already in 2007 the "Guppie" multitool, designed together with Lance Barber, had been awarded as the "best buy" (best quality/price ratio) at the Atlanta Blade Show, the world's most important exhibition for commercial knives. Eleven years later, Tom Stokes tastes again victory, as his KMT won the best tool award this year. 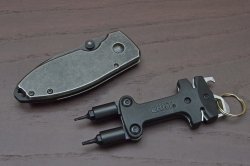 G.B., © G.B.
The particular design of the CRKT Knife Maintenance Tool is very rational. The central body is in glass-fiber reinforced nylon.

It is a rather basic tool, dedicated to the small maintenance of folding knives. The vaguely “T” shaped central body is made of glass-fiber reinforced Nylon.

Along the sides of the body/handle there are two bit holders with T6 and T8 Torx heads mounted on a swinging arm. Nothing could be simpler than opening and closing them according to need. On the opposite side of the handle we find two sharpeners, one ceramic and one tungsten carbide.

Finally, a protruding steel element (in fact it is the extension of one of the two internal plates) acts as a flat-head screwdriver with a bottle opener, acting also as a key ring hole. 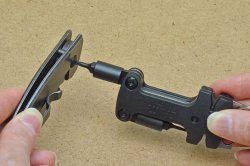 Despite being a small, light and relatively inexpensive tool, details have been taken care of very well.

We start with bit holders, which offer good resistance to opening and remain locked in working position thanks to a friction system.

The two bits are standard measures to remove the screws used in most US made folding knives. In any case they can be easily replaced with others of the right type and size. The two bits supplied are also slightly magnetic to hold small screws more easily.

G.B., © G.B.
There is a sharpener on each side of the handle. This one is ceramic, the other tungsten carbide.

The two sharpeners are suitable for standard-sized fixed and folding knives.

The bottle opener is a bit “off topic”, but since it does not add bulk and weight to the tool (at least not in a sensitive way), it's fine to open a well-deserved beer after fixing your knife. 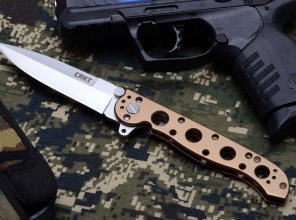 The CRKT M16 is one of the most successful knives manufactured by the US company. From the original design by Kit Carson, dated 1999, an almost endless series of variants has been developed. We reviewed the most recent one with the steel handle featuring an intriguing bronze-colored finish. 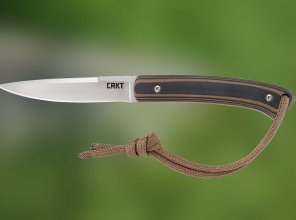 New from CRKT: Biwa knife. The US manufacturer introduces an ultralight fixed-blade knife that is equally at home on the hunting ground, on a fishing trip or on the camping table. Virtual SHOT Show 2021 / New from CRKT: Bona Fide knife. Innovative but also respectful of the tradition of an archipelago famous for the incomparable beauty of its nature and its people: this is the Bona Fide, a folding knife that can be disassembled for maintenance without tools in the blink of an eye. 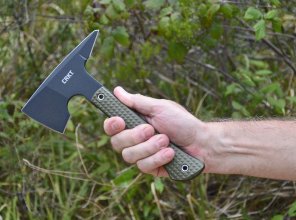 An ideal solution for those who want to carry a powerful and effective cutting tool, but with a relatively low weight. Produced by CRKT, it was designed by Ryan Johnson of RMJ Tactical, an American company specializing in tomahawks and combat axes. 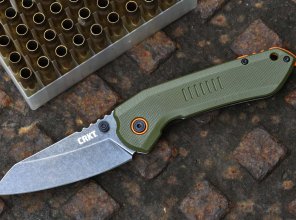 A folder with very clean lines and a versatile and well executed sheepfoot blade. Although relatively inexpensive, it features nonetheless some refinements, such as the orange anodized details. Let's take a look at its merits and defects together. 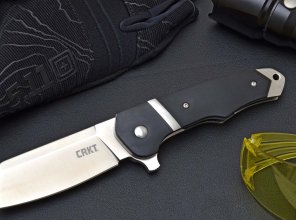 This interesting cleaver-shaped knife was designed by the American Philip Booth with the sole purpose of offering a tool suitable for heavy tasks – even sacrificing lightness if necessary. 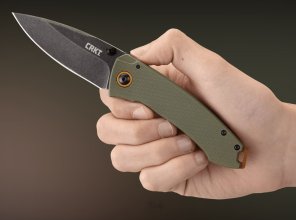 Designed by US knife designer Lucas Burnley, this frame lock folding knife is ideal for everyday carry – it's essential and with no frills. Price is absolutely affordable. 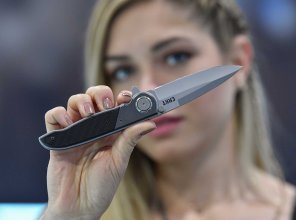 SHOT Show 2020 / New from CRKT: M40-03 knife. This interesting folding knife designed by Kit Carson shortly before his death is now in its third iteration. The new version features a deadbolt locking mechanism and a flipper opening.