If you love Van Gogh’s art and you’re a firearms enthusiast, you have the chance of a lifetime. On the upcoming 19 June, the French auction house AuctionArt-Rémy Le Fur will offer the gun Vincent Van Gogh used to kill himself on 27 July 1890. 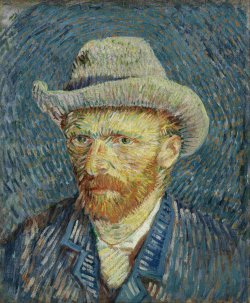 Van Gogh in a self-portrait.

The gun itself, a 7mm caliber Lefaucheux pinfire revolver, is little more than a (very) rusty relic. But the story behind it is fascinating.

Vincent Van Gogh, the famous Dutch post-impressionist painter, had a quite difficult life, also troubled by mental illness. In 1890 he had moved in Auvers-sur-Oise in the South of France, living in room number 5 of Arthur Ravoux’s inn.

Even today, the circumstances surrounding his death are not clear, but here’s how the story goes: at the time he was at the top of his art, he produced over a painting a day, but was mentally unstable. On Sunday 27 July, 1890, he went to a field behind the village church and shot his own chest with a pistol he had borrowed from his host. Reportedly, the gun fell from his hand when he lost consciousness. Van Gogh woke up at dusk, seriously injured. He went back to the inn where he died two days later, on the night of July 29.

The Auction House explains that the gun offered in this sale was found in the field by a farmer around 1960 and was handed to the current owner’s mother. Long kept secret, the revolver was presented for the first time to the public in 2012 at the time of the publication of Alain Rohan's book, "Would we have found the weapon of suicide?". According to Rohan, several pieces of evidence show it must be Van Gogh’s suicide gun: it was discovered where Van Gogh shot it; its caliber (7 mm) is the same as the bullet retrieved from the artist’s body as described by Dr. Gachet at the time of the intervention on Van Gogh’s deathbed; scientific studies demonstrate that the gun had stayed in the ground since the 1890s and finally, it is a low power gun so it could explain why Van Gogh didn’t instantly die after shooting it. 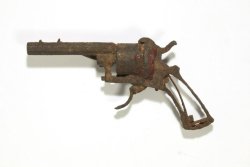 The left side of the 7mm caliber Lefaucheux pinfire revolver.

Another theory about Van Gogh’s death appeared in 2011. According to some American researchers, the artist didn’t kill himself. He would have been the victim of an accident. Two young boys were playing with a gun next to him when one of them pressed the trigger by mistake and wounded him. However, even if this assumption is right, the weapon could still be the one that killed Van Gogh.

In 2016, the Van Gogh Museum in Amsterdam exhibited this gun during the exhibition “On the Verge of Insanity. Van Gogh and his illness.”

Whatever the truth of Van Gogh’s death, with an estimate of just 40,000-60,000 euro (about 45,000-67,000 USD) this little old pistol is a rare testimony of the tragic life of a great painter and could be a real gem for both art and firearms collectors.