Without dwelling on the origins, history or classifications of muzzle-loading firearms, in this article we want to focus on the characteristics and production technologies of the slowmatch, a system of ignition that, despite the remarkable speed of technological advance, predominated for almost three centuries. 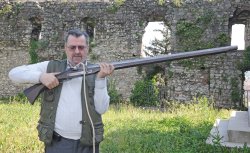 The historical firearms expert Roberto Allara with an original matchlock musket dating back to the 17th century. It's a fireatm of considerable weight and size..

Although the technology of the wheellock was developed in the first quarter of the 16th century and the flintlock in the 17th, the classic and well tested matchlock continued to be used by the military up to the early 18th century.

The reason is obvious: it is a simple, effective and inexpensive technology, qualities that have always been taken into consideration for the ordinary infantry equipment in mass war scenarios.

The ignition mechanism is very simple: when the lit match cord is lowered into the black powder contained in the flash pan or directly into the gun’s touch hole, it causes the ignition of the main charge and all that follows.

So let's see what can complicate or make this simple firing system impractical: 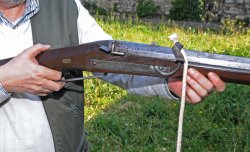 Detail of the matchlock. It's a seemingly rudimentary system, but it's actually very effective.

The production of slowmatch in the 16th century 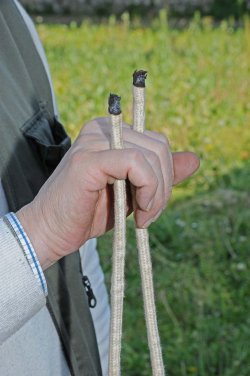 The ignited match cord was held between the fingers like that. Both ends were often ignited.

So let's see how to make a good match cord. In our help we get the famous 16th century treatise by Gianbattista della Valle da Venafro, who published the  military treatise "Il Vallo" (The Wall) in 1521, from which we highlight this chapter: "Take the cord and boil it with lye, add a little saltpeter, and thirdly leave it to dry, just know that the cord must be beaten on a stone with a wooden mallet and let it dry in the shade."

To make the slowmatch you must use a cord with a diameter between 4 and 6 mm and a round section made from pure vegetable fiber, hemp, cotton or linen, best if not treated or bleached for higher historical accuracy.

Attention must be paid to cord intertwining: it is better to use a tightly woven braid, so that it stays together, and not common hemp rope that features a 3-strand construction which is too coarse. Do not to use in any case a cord with a hollow section that would greatly reduce the burning surface. 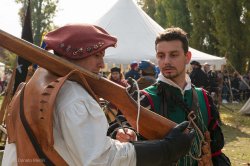 Another image from the "Compagnia delle Bande Nere" historical reenactment. In the foreground, the matchlock musket.

Lye is produced by sieving ash to eliminate lumps or partially unburned parts. Arranged in a pot, commonly used for this purpose only and not made of aluminum, the ash is mixed with five parts of water (volume ratio). Brought to the boil over low heat and stirred frequently, the mixture is first stabilized, checking its boiling and then left to cook for about 2 hours. A prolonged boiling will cause an excessive increase in strength, making it too aggressive. Allowed to decant and cool, the lye is then filtered with a cotton cloth, ensuring that the residue at the bottom of the boiling pot is not stirred. In this way, a fairly clear liquid is obtained which easy to store for long periods in glass or plastic containers.

For simplicity you can also buy sodium hydroxide directly and use it to make a solution by dissolving it in water.

Historically, treatises describe numerous and complex methods for the extraction and refining of this element. It is currently very easy to find in agricultural cooperatives as it is used as a fertilizer.

The third method is recommended: not requiring boiling it’s very simple, burning rate is good and slow enough so that you don’t need large amounts of match cord.

To learn more about the Compagnia delle Bande nere: www.compagniabandenere.it

Subscribe to the Newsletter
This article is also available in this language:
IT
Click here for more information on the topics:
CultureHistorical Firearms
That might interest you too: