In San Marino, behind the Fortress, you can visit a small but well-stocked Museum of Modern Weapons. Built out of the passion of a group of collectors, it is one of the few private collections open to the public in Italy. 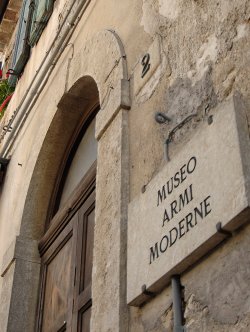 In order to visit the Museum of Modern Weapons of San Marino you have to climb the Mount Titano up to the fortress and reach the old town of the capital of this small republic.

People come to San Marino for many reasons. For example, visitors are drawn here because of the undisputed touristic appeal of the fortress, or because of its history and ancient traditions, which speak the language of freedom and independence. Visitors and new residents are also lured into settling in San Marino thanks to a tax system which is considered to be less oppressive than the Italian one. Still, other people come here to buy weapons or to visit the historical state Museum of Ancient Weapons and Arms, or the private museum which has been devoted to Modern Weapons. 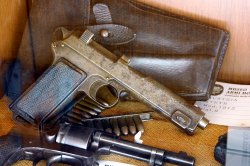 A Steyr 1912 pistol, with loading clips and holster, a weapon popular among Imperial troops during the Great War

Hidden behind the “Piazza della Libertà” and the “Palazzo Pubblico”, which are among the must-see sights in the city, the Museum of Modern Weapons is located in an old palace whose origins date back to the Middle Ages and are linked to the family of its founder. The development of the collection is largely owed to Gaetano Manzoni Borghesi, the “soul and the heart” of the museum, avid collector of weapons, coins and watches. One day, in the early eighties, together with his friends, they organized a public display of the material they had collected. Such material had been mainly collected as war surplus in the farms of the Manzoni Borghesi family between the Santerno and Senio rivers, between the Emilia and Romagna regions, where the gothic military line had locked the front throughout the winter of 1944. 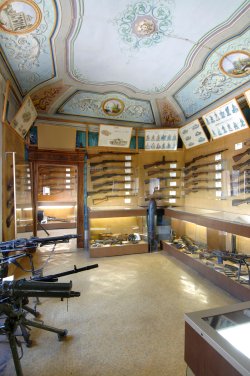 Gaetano Manzoni Borghesi, who was just a kid at the time, waited for the Germans to withdraw and for the allied troops to rush after them. Afterwards, he found on the land owned by his family a lot of war surplus material, which were usually in excellent condition.

He himself began collecting them until the ARAR ‒ the Company for War Surplus Disposal, established in October 1945 by decree and responsible for “relief, custody and disposal of war surplus” ‒ together with the Army Corps of Engineers were assigned the task to clean up public and private combat areas.

Meanwhile, as the collection gradually expanded, Manzoni came up with the idea of structuring it in a more organic way, eventually setting up guidelines which were to inspire the current museum exhibition. Collected items were contextualized as “memories of war,” a war that Manzoni had not fought but whose consequences he had seen and witnessed.

For this reason, he decided to first focus on those weapons which were used in World War II, later extending his scope to those which were employed during the First World War. 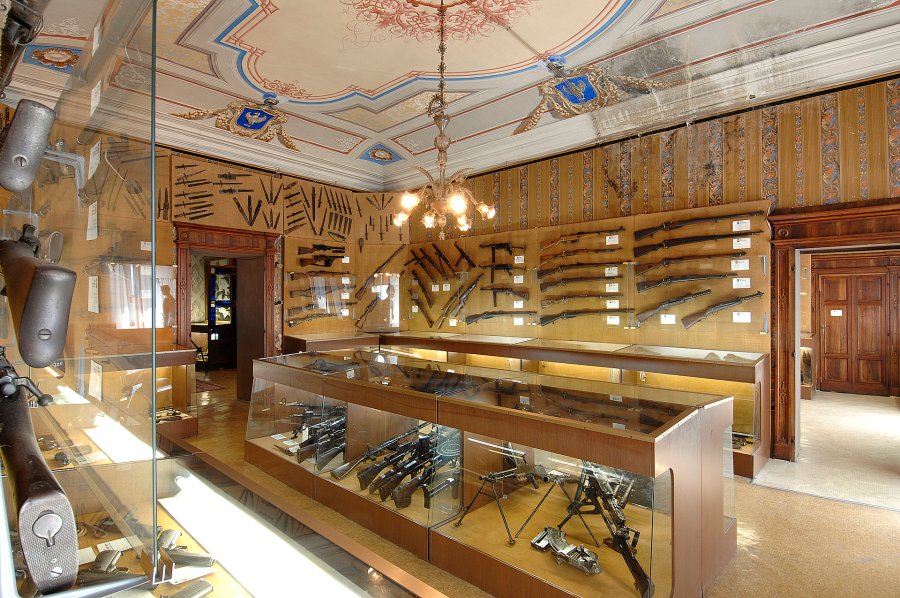 The second exhibition hall of the “Museo delle Armi Moderne” in San Marino, with many Italian firearms 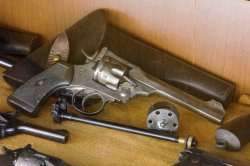 A British Webley and Scott revolver

As a result, the range of collected weapons covers a period which is limited to the twentieth century. The weapons on display did not catch the interest of the collectors because of their fine quality or supposed rarity, rather because of their actual use by the troops employed on the Italian battlefield. Their discovery has always occurred by chance, funded with the collectors’ private funds and with the money raised from the sale of over 7,000 museum tickets every year.

The Vickers machine gun has been one of the most used weapons during the first and throughout the second world war. The weapon has also been adopted by the British (Vickers), Italians (Vickers – Terni), and the Russians (Vickers mod. 1914, the gun pictured).

Manzoni, who is now the sole manager of the museum collection, has committed to complete the range of weapons on display. In fact, this has already been done for several models. That is the case, for example, of the Belgian BAR (Browning Automatic Rifle), on display from the first model ‒ which was employed during the First World War - up to the most recent one, all intermediate variants included. There is also a remarkable set of versions for model 91 – Carcano rifles, whose various types are displayed in various exhibition halls along with bayonets, loading packages and different types of straps. 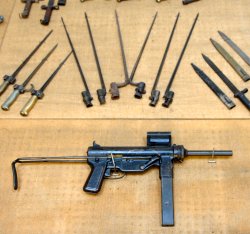 The M3 machinegun was adopted by the American troops in 1942; an improved version, the M3A1, was adopted in 1944. It has been used in the Second World War and in Korea

The museum exhibition includes five rooms, which have been crammed to full-capacity, plus the entrance hall and the ticket office, which also have items on display.

The way items have been arranged in the different rooms has lost some consistency with time, although the future opening of two additional rooms should allow for a more rational organization of the exhibition.

The original layout can still be seen in the first room, dedicated to Swiss and Austrian weapons.

The second one has been devoted to the history of Italian light weapons, and includes valuable pieces such as a Bodeo and Tettoni revolver, a MAB 38, 91 muskets, a Franchi FL57 and a Beretta PM 12.

One thematic section takes inspiration from BM 59 FAL – which was also available in a shorter version for paratroopers – and goes on to address the topic of “assault rifles” as it was altered by FN, Heckler & Koch and other important weapon producers throughout the twentieth century. 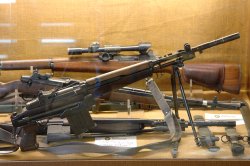 A BM59 FAL with folding stock, pistol grip and special “tricompensator”, for paratroopers and mountain use (Truppe Alpine)

The third room hosts a variety of different collections. These range from a complete collection of British Sten submachine guns to Webley and Enfield revolvers, not to mention French muskets and various weapons of Spanish origin. The next room, the largest one, contains a bit of everything. It includes a collection of grenade launchers, two Villar Perosa machine guns equipped with shield trench, a full 25 Breda, assault rifles coming from America, China and Germany, different types of Russian weapons (Nagant, Tokarev, PPSh, Berdan), other types of machine guns. San Marino military uniforms are also on display here, such as the uniforms of the Guards of the Fortress, of the Noble Guard and of the Uniformed Militias. Next to the ticket office, where you can often find Gaetano Manzoni Borghesi in person, you will be able to see the uniform of the Consuls of the Republic, which is now used only in the Vatican and in those countries where monarchy is still in place. 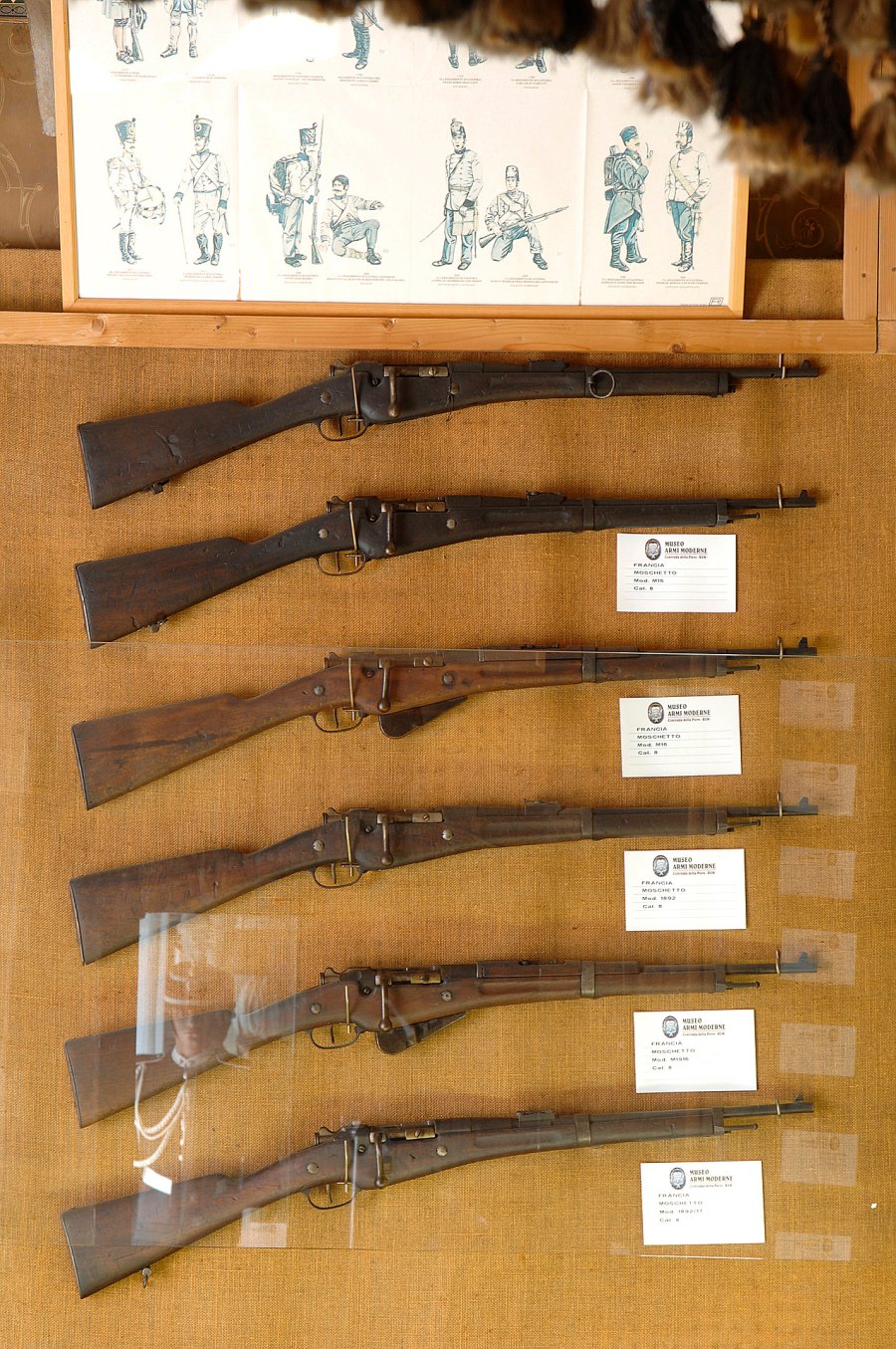 A couple of Kpist m/37, the first machinegun adopted by the Swedish armed forces. Chambered in 9x20 mm Browning Long, it was fed by a 50 round drum magazine

The following room, which concludes the exhibition circuit, hosts a fine collection of hunting weapons.

In addition to a thematic exhibition recalling the history of semi-automatic rifles since the first Browning, there is also a collection of Zanotti rifles and shotguns that certainly stands out - not to mention the fact that the Zanotti family had indeed been supplying the Manzoni Borghesi family with its weapons since 1740.

Moving back to the theme of war, there can be seen American and Russian Maxim machine guns, Austro-Hungarian (Schwarzlose) machine guns, a Panzerfaust grenade launcher, a Stinger missile.

The room also hosts a fine collection of hand grenades, a set of German mines as well as rangefinders, artillery and mortar sights and much more. 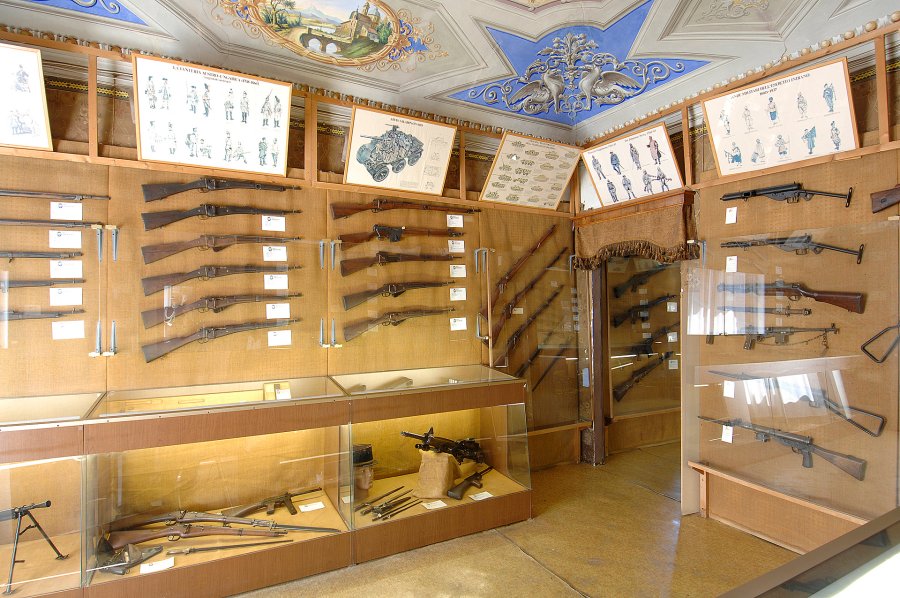 The third exhibition hall of the museum with a complete Sten collection, many Frech muskets and many other firearms

The complete Manzoni collection includes over 2,500 pieces (weapons, accessories and inert explosives), of which only a fraction has been exhibited. The collection has been steadily expanding year after year, mainly thanks to the passion and the financial support of its founder. It definitely deserves a careful visit.

The museum is located next to the “Palazzo Pubblico” and opposite “Piazza della Libertà”, within walking distance from the cableway which connects the city with Borgo Maggiore. The museum can also be reached on foot (you can leave the car in one of the several parking areas surrounding the old town).

The Museum of Modern Weapons hosts a private collection and it is run by its owner, Gaetano Manzoni Borghesi. It opens daily, June to September, from 10AM to 1PM and from 2PM to 6PM. In April and May the museum opens only on weekends. Entrance ticket costs 3 euro (reduced 2 euro fee for handicapped persons, military personnel, youths and elderly).