Magazines are often overlooked and treated as a secondary gun accessory. This is wrong 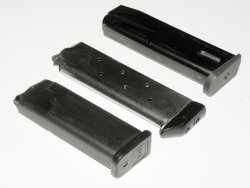 Whatever the structure and materials used, steel, polymer, or stainless steel, every magazine must be periodically checked

Jams in a semi-automatic gun happens for various reasons, one of these, in a significant percentage, is missed feed caused by magazines that are in bad shape.

It is probable that the simple construction of the object tends to suggest that periodic maintenance and an accurate control of parts that make up the cartridge magazine are not required.

Let's see how it is made and what to check to make sure that this simple, but vital and integral part of our gun performs its function without problems. 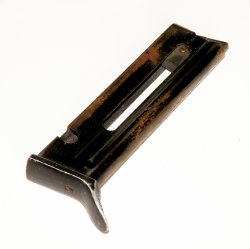 This magazine has lived enough: rust has attacked both inner and outer walls of the magazine body and has corroded the spring

The magazines are generally made of either a steel plate or polymeric material body, on which, along the sides, some holes that display the cartridges contained within.

The magazine body contains a tempered steel wire spring, folded in a zig zag pattern, on the top of which rests a metal or, more and more often, plastic part, called follower or elevating plate.

On the bottom of the magazine, usually inserted or, in other cases, welded, there is a endplate that firmly holds the spring. 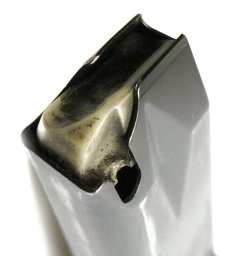 The lips of the magazine are suitably restricted and shaped to simultaneously allow the follower to avoid moving out, to retain the inserted cartridges and, last but not least, to guide the cartridge into the feeding phase. The device can either be single stack or double stack.

The life of the magazine is not easy; in fact, you should avoid purchasing inexpensive or used-abused-magazines from previous owners. During the shooting cycles, combustion residues accumulate in the magazine that could undermine the steel of the spring; the profile of the follower, especially the plastic ones, after a certain amount of use, because of the wear and tear, may not guarantee a correct feed because they do not provide the optimum angle needed by the ammunition to feed into the cartridge chamber. 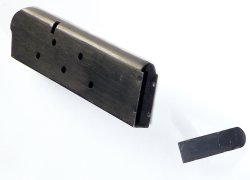 The 1911 single stack magazine had its endplate break off by simply falling on a concrete floor; avoid “cheap” mags like this one

In some cases, the small recess where the projecting part of the hold open lever should lodge will wear and the weapon will no longer remain open signaling an empty magazine; repeated drops onto a hard surface might change the conformation of the lips of the magazine that may abnormally place the cartridge during feeding into the barrel or may not even hold the cartridges at all; the external dirt will prevent a quick insert or prevent the magazine to engage the locking lug, connected to the magazine release button. 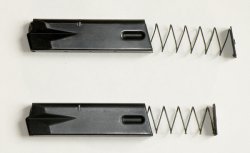 Comparing the springs of two apparently identical magazines gives a good indication of which magazine has been used the most! 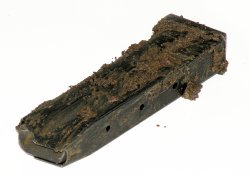 Mud. Once dried out, it can be easily brushed away; in an emergency, it can be washed under a stream of clean water. Remember to dry it throughly

In the long run, if the magazine is loaded to capacity for long periods, the spring could lose its elasticity and not provide the thrust needed to feed our weapon during the shooting cycle.

For the smooth operation of our magazines, we need to carry out the necessary checks and, especially, eliminate all traces of dirt both externally and internally.

It may seem strange but the magazine should never be oiled. Oil attracts dirt and forms a “slurry”: instead of helping the follower sliding within the body, it may actually slow it down due to friction.

The internal spring could rust as well if you continue and spray oil within the magazine without carrying out an accurate cleaning that includes complete disassembly of the magazine.

After specific use, the spring could tend to shorten and thus diminish the tension force. In this case, it is useless to stretch it because after a few extensions it will return to the way it was as before – or worse. The only solution is to replace or remove the magazine mercilessly.

To lengthen the life of the spring, it might be helpful to use our magazines in rotation. 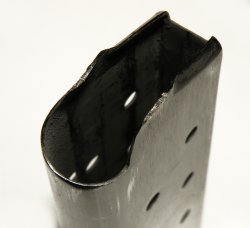 This is what happens when a magazine hits something hard falling on the ground in an emergecy mag change. Inspect the magazines before using them again

People who practice dynamic shooting and change the emergency magazine are forced to drop it on the ground regardless of the consequence of the impact. The impact of the lips with hard surfaces will produce deformations that may not be easily restored, with the ill effects mentioned above.

Even in this case the drastic solution consists in buying a new product. Dirt such as mud and sand will make our magazine work poorly.

If we had the foresight to not use grease or various oils to lubricate the magazine, we remove the dirt in an instant by simply brushing it off. 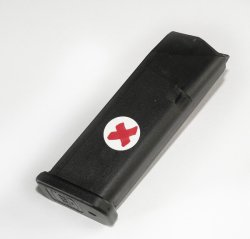 In urgent cases, the magazine can be washed with water, and then we can completely clean and dry it once back home.

When disassembling more than one magazine, although of the same type and brand, you should be careful to not mix up the parts and assemble each device with the parts that worked together.

The final recommendation is to mark the inefficient magazines with the use of a permanent marker or a sticker with the writing “out of order” or any other signal that warns not to use the old magazine.

Thus, the magazine is to be considered a consumable, and based on the quality of the materials and the more or less intense use, it will have a life that ranges from a few months to dozens of years. This strongly suggests that we should purchase several spare magazines for our weapons.