This year marks the 100th anniversary of the birth of Nikolaj Fedorovich Makarov (22/05/1914 – 13/05/1988), famous Soviet designer of small arms and aircraft guns, whose name is forever tied to the invention of the legendary 9x18mm service pistol

Nikolai Fedorovich Makarov was born on May 22nd (May 9, according to the old Julian calendar), 1914 in  Sasovo, a town in Ryazan. He was born into the family of a locomotive driver, Fyodor Vasilyevich Makarov.

The mother of the future weapons designer, Pelageja Wassiljewna, was a housewife and raised her six children. After the completion of the six-years primary school, Nikolai began training at the railway school in Ryazan. Between 1931 and 1935 he worked as a mechanic repairing steam locomotives in the Sasovo station depot at the Kazan railway.

He then went on to RabFak (industrial working faculty) in Moscow. In 1936, Makarov began studying at the Mechanical Institute of Tula, where many other major weapons designers got their college education.

When Nazi Germany invaded the Soviet Union in World War 2, his graduation internship was disrupted. He received his engineering degree ahead of time and was transferred to the Zagorsk Factory, where the PPSh-41 “Shpagin” sub-machine gun was manufactured at the time.

The plant was soon relocated to the town of Vyatskiye Polyany, in the Kirov Oblast, where Nikolai Makarov worked under the direction of the inventor of the PPSh-41, engineer Georgy S. Shpagin.

He very quickly went from foreman to project engineer, and in 1944 graduated with honors at the Mechanical Institute of Tula.

The topic of his thesis, which he himself had chosen, was to develop a new machine carbine for the new 7.62x39mm-M43 cartridge.

On July 4th, 1944, by the decision of the state examination commission, he was awarded the qualification of Mechanical Engineer for weapons and machine gun production.

After graduating, Nikolai Fedorovich Makarov worked as a project engineer at the Research Institute NII SPWA in Kunzewo (now known as TsNIITochMash in Klimovsk today).

But in the following year due to family circumstances N.F. Makarov transferred into the ZKB-14 Design Bureau in Tula – currently known as the KBP Instruments Design Bureau – where he worked until retirement.

In 1945, the GRAU (Main Artillery Administration of the Soviet Ministry of Defence) called for a contest to design a new service pistol in 7.65mm (.32 ACP) or 9mm caliber that would replace the aging Tula-Tokarev (TT) design pistol. Some of the most highly regarded Soviet arms engineers answered the call – F.V. Tokarev, P.V. Voevodin, S.A. Korovin, I.I.

Rakov and S.G. Simonov were among them – as well as some young designers from Moscow, Izhevsk and Tula, including Nikolai Fedorovich Makarov.

Makarov came out ahead in this very hard and multilevel competition with his incredible working ability. He managed to develop and test considerably more prototypes than his competitors.

Makarov's pistols were arguably the best – more specifically, the TKB-412 chambered in 7.65mm Browning (.32 ACP) and the TKB-429 chambered for the then-new 9x18mm cartridge.

Although some design features of the PM are taken from the Walther PP pistol, the Makarov pistol is not an improved copy of the German model: the PM distinguishes itself by a simpler construction and a longer service life, as well by a totally proprietary trigger and safety system, magazine and locking. The gun consists of only 32 (!) components and is totally reliable and easy to use. The PM development won Makarov the 1952 State Award, then named after Josif Stalin.

The Makarov pistol went into mass production in 1949 at the Izhevsk mechanical plant (IZHMECH, mostly known by its commercial trade mark “Baikal”) and became the standard service pistol of the Soviet army, militia, police and armies of most countries of the Warsaw Pact.

To date, the PM is used in the Russian army and police and is used overall in authorities of 30 countries around the world.

The Makarov pistol was also produced in East Germany (as the 9-mm PiМ, manufactured at the “Ernst Thälmann” plant in Suhl), in China (as the NORINCO Type 59), in Bulgaria (as the ARSENAL P-M01), in Libya and in the United States.

In 1994, the Makarov pistol was redesigned  to use a hotter 9x18mm load, and renamed PMM, with the second M standing for “Modernized”. In addition, an integrally silenced version – dubbed the PB or 6P9 – was developed by engineer A.A. Deryagin at the TsNIITochMash plant.

More recently, the PM and PMM pistol design saw the spawning of several commercial developments, including airgun, traumatic non-lethal self-defense versions and others, all manufactured by the IZHMECH company under the “Baikal” brand name.

Quite interestingly, a PM prototype with a polymer frame was developed quite ahead of its times; the prototype, dubbed the TKb-023, didn't enter production as it didn't meet the standard reliability and ruggedness requirements.

Also worth knowing, the Makarov pistol was included in the survival kit of the cosmonauts traveling on the Soviet Vostok spacecraft, which makes it the first firearm ever to be launched into space.

In the span of over 60 years, the “Makar” or “Makarka” (a nickname for the PM pistol in the Russian military jargon) developed a true cult status and turned into a highly sought after collector's item in Europe and in the United States; in the US, it is particularly well regarded as a defensive carry pistol because of its combination of low price, small size, and sufficient knockdown power. Although some critics state that the Makarov pistol lacks accuracy, that's hardly true. According to the official instructional literature for the PM, this gun may produce a 7.5 cm group at 25 metres, which is more than enough in close-quarters engagements. The Makarov pistol is still so popular abroad that the world's largest manufacturers of ammunition (including RUAG Ammotec) continue to offer 9x18mm loads to meet the needs of civilian shooters and those of some eastern European governments that still use the Makarov – basically all former Soviet Countries, to date.

In the 50s, Makarov and Igor Stechkin jointly developed a machine-pistol with a folding metal buttstock, dubbed the TKb-486, that would be used for armored vehicle crews; however, said prototype never went in production due to a lack of interest from the Soviet military.

Nikolaj Makarov also deserves credit for collaborating with Nikolaj Mikhaylovich Afanasiev to the invention of the 23mm AM-23 aircraft autocannon, adopted into Soviet service in 1953. The design was based upon Afanasiev's own, pre-existing A-12.7 autocannon, and won a trial that also saw competition from designs submitted by other prominent Soviet aicraft armament designers such as Boris Shpitalny and Alexander Nudelman.

The AM-23 – dubbed TKb-495 in prototypal phases and designated 9A036 by the Soviet Air Force – was mass-produced by the entity currently known as the KBP Instruments Design Bureau, and was installed as a defensive weapon on aircrafts such as the Tupolev Tu-16, Tu-95, Tu-142, M-4 and 3-M strategic bombers, as well as on the Antonov An-8 and An-12 and Ilyushin Il-76 transport aircrafts and on the “Projekt 125” border patrol fast boats. 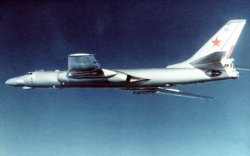 The Tupolev Tu-16K-10-26 strategic bomber didn't receive the NATO reporting name of “Badger” for nothing: it indeed enjoyed the defensive might of seven 23mm Afanasiev-Makarov AM-23 autocannons. Much like a badger, it was a beast that wouldn't let predators – no matter how big – touch him and get away unscathed

Although most modern analysts believe that military aircrafts shouldn't use moving autocannons and machineguns as defensive weapons, at the height of the Cold War these armaments actually worked as an effective deterrent against provocations, particularly since NATO aircrafts often approached the Soviet airspace making air refueling and other complicated maneuvers very dangerous.

Soviet aircrews had a simple way to face this issue: a turret hosting two 23mm rapid-fire autocannons can fire up to eight kilograms worth of projectiles against an enemy in a mere second, an impressive cold shower for any “sky pirate”. And, in the event of an in-flight refueling hose getting torn down and wrapping around the fuselage, the crew could shoot it away with the 23mm cannons to save the plane! 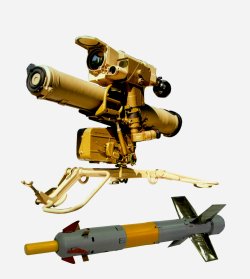 The currently-manufactured 9K11-1M “Konkurs-M” is a modernized version of the “Konkurs” ATGM, which Makarov helped to develop; the “Konkurs” anti-tank guided missile was distributed all throughout the world – much like Makarov's own pistol! – and has been in use with the Armed Forces of over 30 Countries

Nikolaj F. Makarov was also one of the very few small arms and aircraft armament engineers who decided to make a courageous attempt in the field of missiles and rocket armaments.

Along with another famed Soviet weapon designer – Igor Stechkin – Makarov was the co-engineer of some of the most highly effective anti-tank guided weapon systems of all times, including the 9K111 “Fagot” (launched in 1970) and the 9M113 “Konkurs” (Launched in 1974).

Makarov won the second State Award of his life for the development of the wire guidance system for the 9K111 “Fagot” missile, and later he would become the deputy project manager for the platform; the “Fagot” and “Konkurs” systems were the backbone of the Soviet and Warsaw Pact anti-tank defense capabilities all throughout the 1970s and 1980s, and later served as the basis from which the 9K115 “Metys” and 9M113 “Konkurs” anti-tank guided missiles were developed.

Nikolaj Fedorovich Makarov could have done a lot more in his designing career, hadn't him been involved in a car accident in 1969 that left him with a broken leg. His health started to slowly but steadily decay after the event, and eventually forced him into retirement in 1974, although he maintained contacts as a “consultant” for the KBP Instruments Design Bureau for years afterward.

He was also elected twice as a deputy (representative) at the Tula District Council, and served for a long time as a regional councilman for the national “Mashprom” research and development organization. 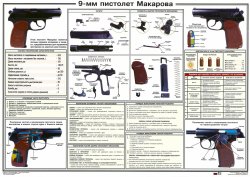 Makarov is the sole author of 36 projects and inventions, and was awarded with the title of “Hero of Socialist Labour” – one of the highest Soviet decorations – in 1974.

Makarov - a man and a pistol

Nikolaj Fedorovich Makarov was not just a talented arms designer, but also an extraordinary person. He was a modest man; when he retired, the Soviet state paid him a “generous” pension of 150 Rubles, but Makarov – the inventor of a handgun that would be sold by the millions for decades to come – refused to accept benefits and privileges for himself: he stated that “he had enough”.

His biggest asset was a Volga car, a gift from the residents of the City of Tula to such an excellent designer for his 60th birthday, whose license plate was, aptly, 60-60. He spent the entire amount of his first State Award – 50.000 Rubles – in gifts for his relatives.

All through his life, despite repeated solicitations, he never went on to become a member of the Soviet Communist Party. He declined all requests by answering: “I can not waste my time at Party assemblies, I still have to work!”.

Nevertheless, he had time for his family; of all his inventions, the one he considered the most useful was a jar sealing machine, conceived for his wife.

Makarov also had time for his hobbies: he liked painting, cars, hunting, fishing, nature, and sports. Old workers of the IZHMECH “Baikal” plant, where the Makarov pistol was (and still is) manufactured and which he often visited, recall how the designer always spent his lunch breaks at the factory volleyball court, where he played with his Izhevsk-based colleagues.

Makarov dressed very simply, and was often mistaken for a blue collar.

Nikolaj Fedorovich Makarov succumbed to a long illness on May 13th, 1988. He was buried at the 1st Municipal Cemetery of the city of Tula.