YSA is the new shooting academy devoted to the training of young shooters in the 3 disciplines: Trap - Skeet - Double Trap. 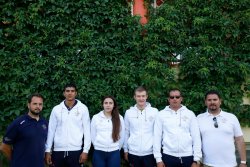 The Youth Shooting Academy's mission is to gift its students the noblest values of life and sports.

YSA is open to young shooters coming from all over the world. Admission to this academy requires discipline, determination and talent.

YSA looks for skill and talent in highly motivated girls and boys. Shooters will be coached by a world renown coach team who will use skill and experience to lead the young shooters in their growing path. Talent is not enough to become a champion; courage, involvement and supporting coaching are paramount.

YSA mission is encapsulated in the following sentence: learn to trust yourself and your skills. YSA promotes champion values and mentality by teaching confidence and self-esteem. Shooters have to compete at best in important events as much they must be used to face any challenge in sport and in life. Any obstacle can be overcome and any challenge can be won.

Experienced and world renown coaches makes all the difference in polishing the champions of tomorrow.

The core of FSC is actual shooting and the camp is open to youngsters from 12 to 20 years old in three shooting disciplines: Trap, Double Trap and Skeet. Participants are given the chance to attend one or two week classes that will be held from the 4th to 18th August 2017 in the "Tav Umbriaverde" shooting range in Massa Martana (Italy).