On November 8th, 2018 the German auction house Hermann Historica in Munich will be auctioning an extraordinary collection of service pistols and revolvers. Here is a preview of what's available at the auction.

The Johann Lux collection will be auctioned at the Hermann Historica headquarters in Munich (Germany) on November 8th. It’s a very important collection of service pistols and revolvers ranging from the second half of the nineteenth century to the first half of the twentieth century. Let's take a look at some of the rarest models in the collection:

Extremely rare Colt 1873 revolver in .45 Long Colt with a 5 and ½ inch barrel, nickel-plated finish, serial no. 354275, produced in 1931. In addition to the original Hartford markings, it features British army's acceptance marks.

In 1940, fearing an imminent invasion by the Nazis, the British government bought all the weapons in Colt’s British warehouse. There were 163 guns of various calibers, 108 of which were in .45 Long Colt.

According to the records, 63 Colt Peacemakers were nickel-plated, the existing documentation confirming the autenticity of this revolver. 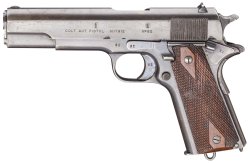 .45 ACP Kongsberg pistol Model 1912, serial no. 82 with well-preserved original bluing and some scratches on metal parts and grips. 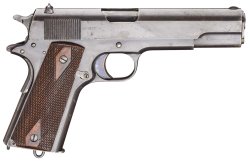 Produced in 1917, barrel was factory replaced in 1922. It is a Colt 1911 produced under license by the Norwegian Kongsberg Våpenfabrikk factory and it is easily recognizable by the extended slide release lever.

The Kongsberg Model 12 was produced in relatively small numbers: it is estimated that from 1917 to 1940 no more than 23000 guns were manufactured, while during the Nazi occupation of Norway about 8200 were produced.

It is probably the only Model 12 existing in Germany and is accompanied by the original leather holster and a letter from the factory that reconstructs its history. Starting price 8000 euro. 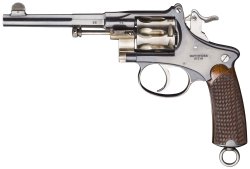 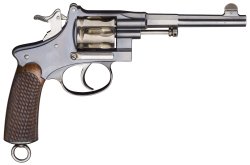 Seven-shot cylinder and double-action mechanism. When the hammer is cocked, the cylinder moves two millimeters forward towards the breech to prevent gas from escaping through the "cylinder gap", a system that will be perfected two years later on the Nagant revolvers.

On the left side of the frame we find the "Waffenfabrik / Steyr" marking. 100% original finish, blued frame and barrel, straw bluing on cylinder and yoke. Checkered walnut grips without signs of use, practically new, never fired. 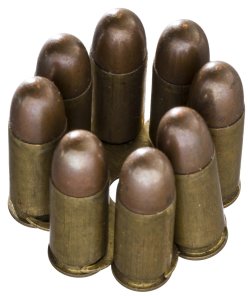 The marks make it possible to date the production to 1903. "P. Webley & Son. London & Birmingham" on the barrel. On the left side of the frame bridge we find the "Webley Fosbery" marking, ".38 Automatic" is on the lower frame. Original bluing slightly thinner on barrel, partially spotted with signs of use. Checkered hard rubber grips, with lanyard loop.

In total, about 267 were built, of which probably only twenty survive today according to collectors’ estimates.

The gun is sold with an original brass loading clip and eight "Kynoch 38" cartridges which, if sold to a non-German citizen, can’t be exported.

The queen of collectible pistols, namely the Borchardt C93, could not be missing: chambered in 7.65mm Borchardt, serial number 1454. 190 mm barrel in excellent condition, 8-round magazine. On the knee-joint it is marked "D.R.P./No. 75887", while on the right side of the frame "SYSTEM BORCHARDT PATENT / Deutsche Waffen-und Munitionsfabriken / Berlin.".

It’s particularly rare because it is accompanied by the original holster with the star mark and the letters "P.F. - CH" indicating the adoption by the financial police of Chile (Policia Fiscal de Chile). The pistol is accompanied by a dummy wooden magazine (which was used to facilitate the cleaning of the gun) containing the brass cleaning rod and grease box.

The starting price of this very rare revolver is 19000 euro.