We have seen it with our own eyes: to those who argued otherwise, we can now offer incontrovertible photographic evidence showing that the “Reckturmˮ museum of ancient and modern firearms, of which we speak, is not born out of our childhood imagination, but can be visited with very little effort in Austria, in Wiener Neustadt 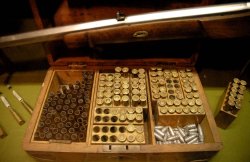 Bruno Circi
In some cases, the original ammunition are much rarer than the weapons that used to fire them 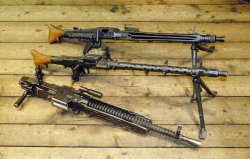 Thatʼs right: the land of toys does exist and it’s not too far! The environment hosting our special “Toy land” is quite peculiar, namely the “Reckturm” (roughly translated into “Keystone Tower”), located in the charming town of Wiener Neustadt, Austria, not far from Vienna, a town already known for its hosting of the Steyr-Mannlicher shooting facility, numerous civilian and military shooting ranges and none other than the training center of the Kobra, the Austrian special Forces.

The Reckturm stands, along with the remains of the medieval defensive walls of the city, as a mighty fortress, and in itself offers the visitor a glance of the utmost grandeur, stemming both from its significant historical and artistic value dating, originally, back to the thirteenth century, and the efforts of restoration, starting in 1994, have returned all its splendor. 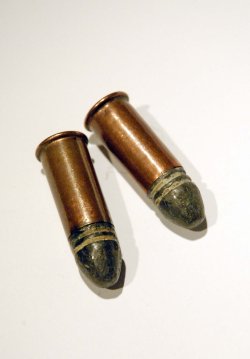 Readers will claim that this is not enough to qualify the structure as an alleged Austrian-style Rovaniemi (a Finnish tourist destination that is commercially and artificially designated as the headquarters of “Santa Claus”), or as a branch of the famous “Duncan's Toy Chest” of New York, a “toy shop” delight coveted by all the children the world over. In fact, the show offered to us by the owner (this private site is the estate of our host's family) Herr Josef Karlik, who personally guided us on a special night tour, thus exclusively opening the place of delight and entertaining us with local beers in bottles available to the well-supplied bar on the last floor at the end of the tour, is definitely breathtaking and we believe the intrinsic value of the “toys”, of course predominantly, as we understand it, hopology and armiger, but not only, is even more enhanced by the scenario in which the precious collection is housed and brilliantly located. 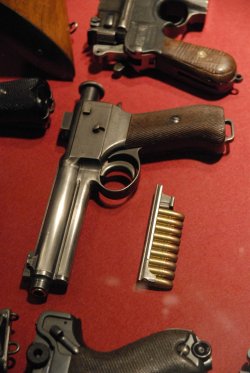 Bruno Circi
All the weapons in the exhibit, such as this Roth-Steyr, are basically brand new

As we enter the Reckturm, the scene opens in an uncovered basement in which the authentic remains of stumps, chains and pallets, on which plastic mannequins are chained (the skeletons of the real “guests”  were found on the site and removed) give a clear idea of the main function for which the tower in question was used: a prison and torture chamber.

Thus, we have an idea of the living conditions of the people who were subject to omnipotent and tyrannical state powers of the era, or rather, the conditions in which many present day disarmist regimes would like to bring down the population. 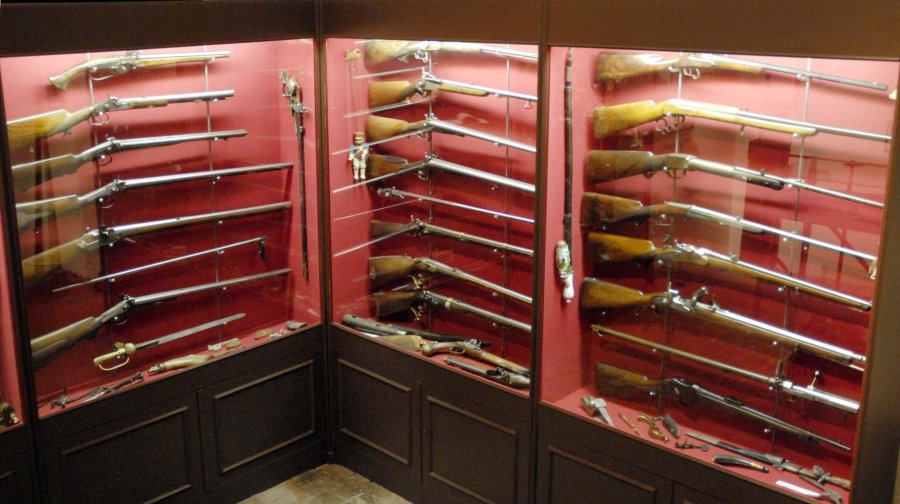 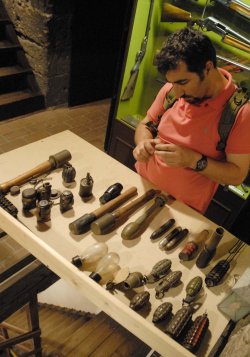 Bruno Circi
Hand grenades of every type and make, in this educative showcase originally conceived to teach children the dangers of the years following the war, especially for the young ones, in Europe

The five levels, accessed through wooden stairs, offer the visitor, in large, orderly and well-lit wall-mounted display windows, but also with loose pieces, a hopological selection including ancient weapons (also including a certain amount of blades) muzzle loading, matchlock, flintlock and wheellock, both local and also from Eastern Europe, with some pieces finely worked and carved, to the envy of the best public museums in Europe and the most beautiful auction houses collections. The tour continues with the evolution of the long and short breech-loading firearm, a large section of Old West with many original pieces, including lever-action Winchesters and pump Colts, some from 1851 and 1860 (and even some Italian made contemporary replicas) and more, all in “mint” or almost “mint” condition and, of course, supplemented by even more rare original samples of ancient ammunition. This naturally in a massive rural architectural context (ceilings with exposed beams and walls with a thickness of nearly two meters!) and complemented with local and African hunting trophies. 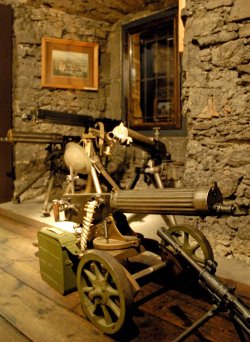 Bruno Circi
Not only small arms. The Reckturm hosts many examples of full machine guns with their accessories

Against this background, we begin to catch a glimpse, interspersed in themed collections, of loose pieces consisting of largest variety of modern automatic weapons: Maxim, Lewis and Schwartzlose machineguns, even a side loader Johnson Automatics and a VZ 26, together with tables of hand grenades of various make and origin (defused and blanketed, used for teaching children recognition of dangerous war remnants), showcases of vintage toys (Schuco and many other, in the best Central European tradition) that would be the delight of collectors. Other superb showcases and shelves of “Express” weapons in African caliber as the introduction of additional “delicacies”, always amongst low stone vaults, stone fireplaces and antique tools: each useful space is allocated to an increasing number of automatic weapons. 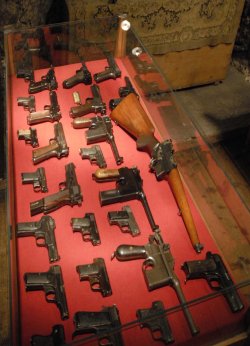 Bruno Circi
A Mannlicher carbine 1901 in the display, together with some extremely rare semiautomatic handguns; some firearms are at the top of the collector's dreams

Thus, conceptually retracing the history of firearms and increasingly approaching present day, from the Fal to the G3, passing through the Stg77 (Steyr AUG), the MP40, MP44, Shpagin (Ppsh41) and others (Sten, Thompson, AK 47, etc.), and finally, on the last level, with showcases of rifles, revolvers, and as many as possible, known or not, but always in excellent condition, modern semi-automatics with, at the apex, no less than a Mannlicher carbine pistol (1901 model) in 7.63 mm Mannlicher, in conditions that are even better than the real copy (the n/s 176) seen and photographed at the Steyr museum, and a Spanish Royal MM31 with a 140 mm barrel and 20 rounds magazine. 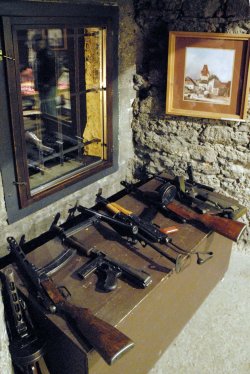 Bruno Circi
Obviously modern small arms, as well; although, the most recent example dates to the early ʼ80s. We can spot and AUG among these Sten, AK47, Thompson M1 and PPSh

A valuable and rare, very rare, collection of military pistols of various origins on the background of a panoply of perfect and original copies of Japanese machine guns,  MG34s, and 42s complete the collection of “toys”, which we were allowed to handle and examine as desired and anywhere we wanted to.

Only part of the tower and collection of which is actually on display cannot, as one would assume given the Italic pseudo-exclusivist mentality typical of the country from which we come, be visited by enthusiasts and workers, as is, unfortunately, the case with most of monuments and collections of its kind in our country, but everything is open to the public, although booking is recommended.

The Reckturm is open to the public on Tuesdays, Wednesdays and Thursdays from 1 May to 31 October of each year from 10:00 to 12:00 and from 14:00 to 16:00 as well as on the first Saturday and Sunday of each month in which the museum is opened.