On December 13th, 2018, a fine and antique gun auction organized by Holts Auctioneers was held in London. Rare antique shotguns, needle fire and percussion guns, lever rifles: let's see what were the firearms that recorded the highest prices.

A contribution from Giorgio Brancaglion / all4shooters.com01/05/2019 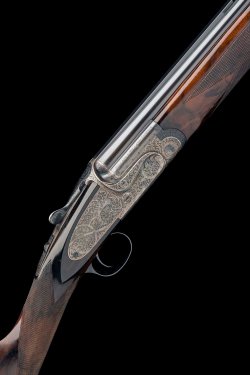 Holts auction held at Holly Hedge House in Blackheath, London, on December 13th recorded another great result with 64% of the 843 lots sold the same day with a total cash inflow of over 700,000 pounds (some 775,000 euro at the current exchange rate). The distribution of the purchasing market showed a significantly higher percentage of buyers from the United Kingdom – 56% (42% in the last sale) – compared to 21% from continental Europe and 14% from the United States.

The highest price was reached by two lots, including the no. 1641 – a 20-gauge Holland & Holland “The Sporting Model” over and under ejector shotgun that was auctioned for £ 28,000 (about 31,000 euro) well above the estimated £ 20,000-25,000. The gun was awarded to a buyer who participated in the auction via the Internet. Lot 1223 also saw a result well above its initial estimate. We are talking about a John Rigby Express sidelock ejector double rifle in caliber .470 that from an initial estimate of 15,000-20,000 pounds registered a final sale price of 28,000 pounds. 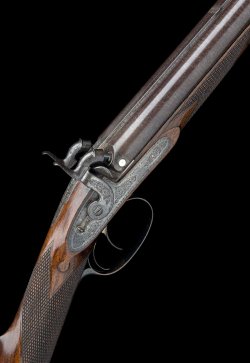 A Thomas Boss double-barreled shotgun dating back to 1854 and beautifully preserved: it was auctioned for £ 3,000.

Condition is always fundamental in determining a gun value: Lot 525, a double-barreled Thomas Boss percussion gun dating back to 1854 and beautifully preserved, was beaten at £ 3,000, far above the price of similar guns but in worse shape.

The complete list of lots with the sale price can be viewed here: