Cybergunʼs “The War, Inc.” and “SoftAir Battle Zone”: Airsoft and virtual reality, two thrilling experiences, so far yet so close, roll into one for unprecedented excitement and fun!

The French Cybergun group is now a European leader in Airsoft, given the high technology levels of its manufacturing facilities in Europe and Asia and the exclusive manufacturing patents it owns from twenty different companies and trademarks between the worldʼs most notorious.

The Cybergun world is not all here, anyway: at the 2012 IWA Expo in Nuremberg, Germany, the French company astonished the Airsoft/MilSim world by announcing the launch of an incredible project that encompasses together two different matters, so different yet so similar: the Airsoft skirmishing sport and the first-person-shooter videogames.

The project is named WAR Inc.: itʼs a web-based co-op videogame jointly developed by Cybergun and Microprose, with the American company engineering the software and the French group providing its expertise regarding firearms and combat tactics to achieve the highest levels of realism. The Installer for WAR Inc. can be procured for free at: http://www.thewarinc.com/

WAR Inc. is a tactical third-person shooter, free to download and play on any Windows PC. WAR Inc. allows co-op and “Deathmatch” play in eight-members teams for a maximum allowed amount of thirty-two players per game, and features a wide, growing number of extremely realistic playable scenarios and modern, customizable guns available. Every player may decide to take the role of an “Assaulter”, the “Engineer” or the “Medic”, each one bearing a distinctive, realistic equipment based upon the real gear employed by frontline troops in modern combat situations; players will of course be able to fully customize their outfit according to the mission they're playing at the moment and to their position in the global ranking.

Jérôme Marsac, presidente of the CYBERGUN Group, introduces the interactive WAR Inc. project that merges the Airsoft skirmishing world with the third-person-shooter videogames universe, and blends the experience of the massive on-line play with a true “SoftAir Battle Zone”

The War Inc.
Cybergunʼs “The War Inc.” program is a total new approach to videogames AND Airsoft skirmishing

And the global ranking is the true heart of the WAR Inc. initiative, whose goal is to reach out the highest possible number of videogames, Airsoft and MilSim enthusiasts thanks to its exciting mix of action and realism. The global ranking will entitle players with points to spend within another Cybergun project, also introduced at the 2012 IWA expo along with the WAR Inc. initiative: the SoftAir Battle Zone network, a true net of entirely Airsoft-dedicated facilities that the “Entertainment Systems” division of Cybergun developed at the culmination of 10 years of research to introduce players to the sport of Airsoft in an urban environment by embodying the fusion between the worlds of Airsoft and video-gaming.

The SoftAir Battle Zones will be all-family entertainment centers, where the best WAR Inc. players will be granted free entrance with friends and relatives according to coupons that they might win according to their global ranking placement. The SoftAir Battle Zones shall be divided in sectors, including a computers area for WAR Inc. network play and a “Kalashnikov Coffee” bar-restaurant point; the “Zones” will also feature Airsoft IPSC fields, law enforcement -type training ranges with electric targets to experiment the thrill of a professional training obstacle course with the use of airsoft replicas, and fitness centers featuring interactive programs developed in contribution with the American fitness trainer Jillian Michaels; video-gamers who approach Airsoft for the first time might also want to try the interactive labyrinth, where they will be asked to face with an Airsoft replica a number of reactive electronic targets. 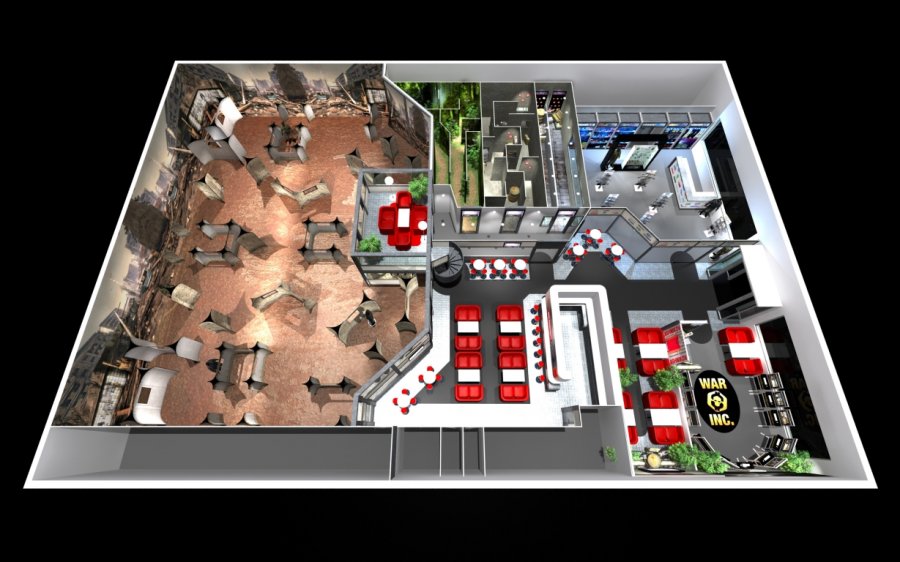 Last, the most experienced Airsoft gamers will want to enter the CQB Area, which will allow two teams up to ten members each to compete face-to-face in a simulater urban battle similar to a WAR Inc. scenario, using Cybergun Airsoft replicas and protective equipment, in a totally safe ground that features full plastic building with no sharp edges.

The SoftAir Battle Zones will also feature shopping and service centers, where Airsoft gamers will be able to purchase Cybergun replicas and/or upgrade and repair the ones they already own.

Thatʼs a pretty ambitious project what CYBERGUN got in its hands, with full potential to grow up into the next frontier of global Airsoft, and we promise you to follow its developments step by step, eager to try out the feeling and excitement it will carry!