A brief history of the pistol carbines

Handguns converted to "carbines" with addition of a shoulder stock are an old concept; is this concept still relevant today?

It is a well known fact that shooting a pistol accurately is not an easy task to accomplish. This task becomes even harder if one has to shoot a handgun with some precision when under the stress of combat, or just plain tired from the travel or work. It is also known fact that under same circumstances it is noticeably easier to hit a target with carbine or rifle than with handgun, even if both use same ammunition and theoretically capable of same (or similar) accuracy. It is just the nature of man’s anatomy that shooting a gun off-hand is inherently less accurate than shooting a ballistically similar gun with some form of shoulder support. 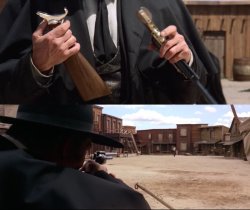 As a result of this knowledge, people tried to improve accuracy of their sidearms with add-on stocks from earliest periods of firearms history. Single-shot flintlock and percussion cap-and-ball pistols and revolvers were sometimes upgraded with clip-on stocks which improved their real-life accuracy at extended (for a handgun) ranges. This allowed those handguns to be carried holstered as usual, fired in close encounters as usual, but, when situation required longer shots, to be quickly fitted with shoulder stock and then fired like a compact carbine. A very nice representation of this case is given in a famous “spaghetti western” movie “For a few dollars more”, where a character, played by Lee Van Cleef, uses his long-barreled Colt M1873 “Single Action Army” revolver with attached shoulder stock to drop down a bandit at a range of several dozens meters. 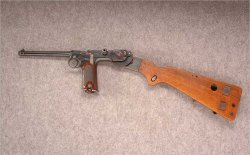 When industrial revolution made cartridge-firing handguns somehow smaller, the separate shoulder stock evolved into dual purpose shoulder stock / holster. Under normal circumstances, pistol was carried inside a massive wooden holster, or inside a leather holster attached to a flat wooden stock, and used like a pistol. However, when situation required longer shots to be taken, the said holster was removed from the belt and attached to the grip of the pistol using specially provided interface to form a shoulder stock. The most famous pistol to use this concept was probably the Mauser C96, which used wooden holsters / stocks that can be attached to the slot, machined in the grip to form a shoulder stock. However, it was predated by several years by the first successful semi-automatic pistol ever made, the Borchard C93. Borchard was sold with combination shoulder stock-holster which used leather scabbard attached to a flat wooden stock. It used a special dovetail at the rear of the frame to attach the stock to the gun when required.

The concept was carried further by several other famous pistols, including Luger “Parabellum”, FN Browning M1903, and FN Browning GP-35. Other semi-auto pistols of interwar period that were offered in stocked versions include several Spanish handguns such as Astra 900 and its versions, some Star models, Polish VIS-35.

Some of these pistols also served as platforms for special carbine versions which were optimized for stocked, shoulder-fired use rather than holster carry. Among those, worthy of note are Luger, Mauser and Mannlicher carbines of pre-WW1 era. 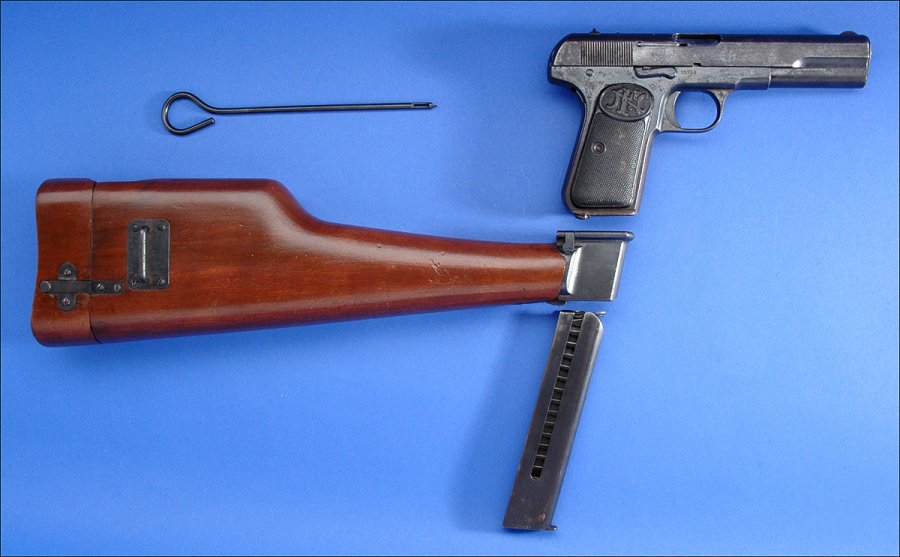 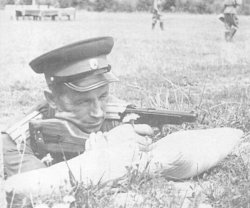 After the WW2, popularity of stocked military and police pistols rapidly declined, thanks to appearance of compact submachine guns and compact assault rifles. Probably the last officially adopted pistol that was issued with shoulder stock/holster was soviet Stechkin APS machine pistol. It was adopted in 1951, but soon withdrawn from the service because it was too expensive to make, and its large and bulky holster / stock made it uncomfortable to carry, especially in its intended role of a defensive sidearm for vehicle crews. 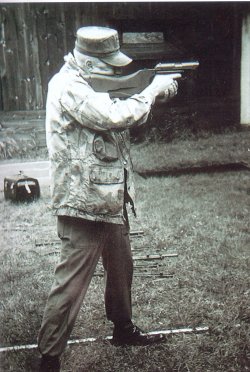 Later on, during 1960s-70s, several attempts were made to produce stocked machine pistols for military and law enforcement use. Those included German HK VP-70M machine pistol and Italian Beretta 93R machine pistol. The former featured a massive shoulder stock / holster, made from polymer; latter – a separate and rather compact folding detachable stock, made of steel, which was carried in a separate pouch. The Beretta 93R fared a little better than HK VP-70M (which turned out to be a commercial failure), but neither was too popular; for close combat work, most military and LE personnel preferred various compact submachine guns, which were better optimized for shoulder firing (and thus more accurate in single shots), and also better suited for automatic fire and usually less expensive. These guns, such as Mini-Uzi or HK MP5K, while compact for submachine guns, are still noticeably bigger and heavier than typical service pistols.

Despite proliferation of various compact submachine guns, some security and law enforcement services still prefer to issue pistols, for variety of practical and legislative reasons (i.e., certain security services might be prohibited from use of automatic weapons by local rules and regulations). Recently, several companies tried to remedy that problem by manufacturing add-on detachable stocks for pistols such as Glock 17, or designing “clamshell” carbine adapters with their own telescoped or folding stocks, that can be used to “dress up” typical service pistol like SIG-Sauer P226 or Glock to make it act like a compact carbine. This type of upgrade, typified by Israeli CAA “Roni” system, offers plenty of Picatinny rails to mount sights, lights and lasers, and a shoulder stock to fire weapon accurately out to 50 meters and beyond, at the cost of increased bulk and weight.

CAA “roni” conversion unit which turns a Glock pistol into much more accurate carbine, but adding noticeable bulk and weight

One interesting solution to this problem was recently offered by venerable and innovative Swiss company B&T AG. This company produces, among other things, several pistol-caliber submachine guns and semi-automatic pistol carbines, but most of those are noticeably bigger and heavier than modern duty pistols. To remedy size, weight, carry and handling problems, inherent to previous generations of stocked pistols and pistol-carbines, B&T designed and manufactured an interesting gun they call “Universal Service Weapon”, or USW.

Only slightly larger and heavier than a typical full-size service pistol, the B&T USW offers integral side-folding stock which does not interfere with everyday holster carry (using special duty holster also designed by B&T), and can be switched between “handgun” (off-hand) and “carbine” (shoulder-fired) modes in less than 2 seconds, by simply unfolding or folding the integral stock. It also features integrated Aimpoint Nano red-dot sight, which greatly increases accuracy and target acquisition speed in most tactical situations, and an accessory rail for flashlights and/or lasers. Typically for B&T weapons, USW features threaded barrel that can accept highly effective B&T sound suppressors.

This handy and versatile weapon can serve as a pistol during very close encounters, or as a carbine to take out terrorists or armed criminals at ranges of up to 100 meters. Built around proven Browning-type locked breech system and firing ubiquitous 9mm Luger / NATO ammunition, this weapon can be used as a duty gun for police and security organizations, at least partially replacing standard service pistols as primary sidearms.

Subscribe to the Newsletter
This article is also available in this language:
RU
Click here for more information on the topics:
PistolsCultureSemiautomatic pistolsTechnics
That might interest you too: 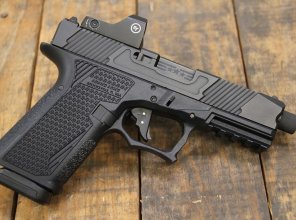 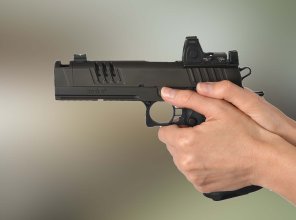 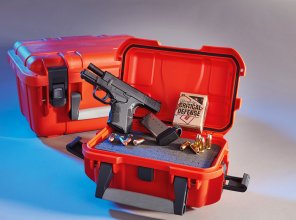 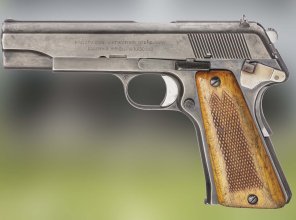 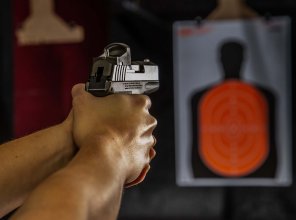 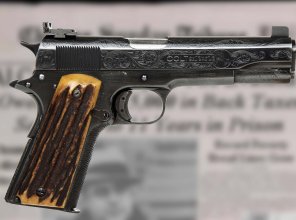