While the whole world is paralyzed by the pandemic and uncertainty about the future, wearing masks and gloves a few days ago the Russians held a gun exhibition in the heart of Moscow. And their leaders are committed to promoting the hunting and sport shooting firearms industry in every way.

The booth of Arsenal, a Moscow gunshop that distributes international brands in Russia.

In Gostiny Dvor, an exhibition center in Moscow, a stone's throw from the Kremlin, the ORЁLEXPO International Exhibition of Arms and Hunting Gear – perhaps the most important international exhibition of this size in this problematic 2020 – was held from October 15th to 18th.

More than 130 exhibitors, 13,200 visitors, more than 100 speakers of business programs, more than 9500 live event views – these are just some numbers that are the result of a great work by the organizers and a deep study of professional topics.

Mikhail Khubutia, the organizer of the exhibition, speaks at the opening of the event.

The exhibition dates were not randomly selected. Mikhail Khubutia, the organizer of the exhibition and co-owner of the VaRMS infrastructure project, thought it appropriate to hold the exhibition in those days: "It is necessary to hold such exhibitions now. The pandemic gave a chance to Russian gun manufacturers to break through, and the competition in our domestic market will only grow. We have all conditions, specialists and companies; we can organize production of any complexity in Russia. Within the framework of the exhibition we have organized a wide business program – forums and meetings so that the heads of Rostec Corporation, Russian ministries and companies could come to joint decisions. In recent years, many were more interested in reselling foreign products. Hunting guns from the USA, Germany, Italy and Austria cannot come to us because of sanctions, but the import is still dominating the market. But we are also developing high-tech weapons. Russia has always had enough talented designers and developers of new technologies, and we have to clear the path for them. Our task was to ensure communication of all participants of the exhibition and organize a complex dialogue. And this task has been brilliantly fulfilled."

The exhibition program included twelve expert seminars that gave voice to representatives of key ministries, the most important manufacturers of hunting guns, representatives of Russian regions and associations of hunters and sport shooters. 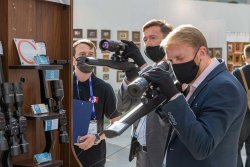 Optoelectronic products are an area where the former USSR has a lot to say.

The pandemic has changed the balance of power and priorities: in Russia there is a significant increase in domestic tourism, many hunters and sport shooters rediscover the immense expanses of their homeland, giving a boost to the creation of new shooting ranges and hunting grounds. The theme of hunting tourism has aroused particular interest. Liliya Shur-Trukhanovich , the Director of the Department for development and regulation of foreign economic activity of the Russian Ministry of Economic Development, emphasized the importance of reducing bureaucratic barriers and the need to develop a system of electronic visas. The mysterious Yacutia, the largest Russian region, presented a special program for hunters and tourists. According to Andrej Fedotov, Permanent Representative of the Republic of Sakha (Yakutia) to the President of the Russian Federation, it would be possible to organize hunting and fishing trips of all kinds. 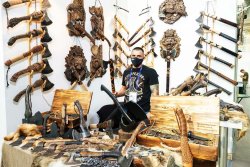 The Russian government is ready to support the country's firearms manufacturers. As Dmitrij Kapranov, director of the Department of Conventional Arms, Ammunition and Special Chemistry of the Ministry of Industry and Trade of the Russian Federation, noted during his speech at the seminar on "International cooperation and competition in the domestic market of civilian firearms",  "Our task is to create conditions for manufacturers, to ensure competitiveness of their products, including the growing interest of foreign buyers". In addition, in Russia they want to simplify access to hunting for citizens, which the Director of the Department for Hunting Management of the Ministry of Nature of the Russian Federation, Andrey Filatov, sees as his main task: "The Ministry aims to support the activities of legal entities engaged in game propagation and providing services to hunters and is working to reduce barriers and the number of papers for hunters. Russia will undergo major changes in legislation to simplify access to hunting”.

The pandemic has also forced the giants of the Russian market to start diversifying their production, reorienting towards civilian users. The most famous of them is the Kalashnikov Group. "If before the crisis we were working on several main products that were exported, then during the crisis period we introduced about 40 new products that were not previously produced and positioned them on the market," said the first Deputy Director for Operations and Production System of the Kalashnikov Group of Companies, Mikhail Nenyukov.

In light of the growing interest in hunting and sport shooting, as well as the growth of domestic gun production, much attention during the exhibition was turned to the training of the younger generation of Russians in the use of firearms. At the moment, there is a revival of the children's patriotic movement – members of the "Young Army" organization are mastering various types of weapons, and this is a special market for Russian manufacturers offering small arms.

The future is also in virtual reality 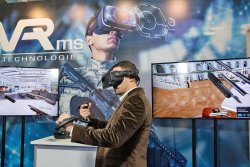 Russian gun companies rely a lot on the possibilities offered by virtual reality applied to the world of sport shooting and hunting.

The excellent organization of the event allowed guests and participants to see and touch new products at the stands of the best Russian gun brands, where new models of firearms, optics and equipment were on display. Russia is exploring new horizons: for example, a unique VaRms virtual project was presented at the exhibition. Wearing a virtual reality helmet,  Visitors could watch the gun, disassemble it, re-assemble it, go to a virtual shooting gallery, practice and get advice. The project will create virtual representations of hunting grounds where it will be possible to experiment hunting trails and adventures.

The release of the online version of the application is scheduled for autumn 2021. In the near future, Russia is ready to surprise the world with projects in which the real meets the virtual: a new infrastructure project that will open near Moscow was presented at the exhibition. It is a building of about 10,000 square meters that will include shooting ranges of different sizes, representative offices of gun companies, as well as virtual reality ranges, where enthusiast will be able to choose any type of firearm and live their hunting adventures.

The Russians have remained true to themselves at the exhibition – in addition to firearms, films about Russian guns, hunting and traveling were shown. The "ORЁL" – the Russian Eagle – took off high and confident. Probably, foreign producers should seek the opportunity to present their products in Russia, while local manufacturers reorient themselves in the market. As a Russian proverb says: “A Russian man harnesses the horse slowly but drives fast". The Russians have been preparing for a long time and are now ready to develop their production very quickly.

Subscribe to the Newsletter
This article is also available in this language:
DERUIT
Click here for more information on the topics:
CultureEvents
That might interest you too: