NITROCHEMIE WIMMIS AG in Switzerland launched its first propellants about half a year ago, under the brand name "RELOAD SWISS". We take a look at their handgun powders, with which we performed real pioneering work given the scant load data available. The result is 26 custom loads, some of them tested for gas pressure, in 5 handgun calibres

Things have been moving forward in the reloader scene since autumn of last year, when the Swiss firm NITROCHEMIE WIMMIS AG simultaneously presented no less than ten new propellants, seven of them powders for long gun cartridges and three for handgun cartridges. In Germany, the Wimmis name, which originates from the town of the same name in the canton of Bern, is still relatively unknown although the company has a history going back almost 100 years, and Swiss marksmen have been relying on these propellants for a long time. Among other things, it is the lack of the necessary CE approval that has prevented their propellants to reach end consumers outside Switzerland.

The situation is different in the industrial sphere, and an ammunition manufacturer in Germany has been using this Swiss-made powder for some time now. Of course, the Swiss army patriotically relies on this propellant from its own country, where RS 20 can be found in 9 mm Luger cartridges, and RS 40 in the 5.56x45 GP90 rifle cartridge. Similar to the Finnish company VIHTAVUORI, RELOAD SWISS also relies on a numerical classification system where a higher classification number indicates a lower burn rate. This covers the whole bandwidth of products beginning with the medium-fast pistol powder RS 20 all the way to the rifle powder RS 80 for high-volume cartridges such the .338 Lapua Magnum or .50 BMG.

The three RELOAD SWISS high-calibre handgun powders start with the RS 20, a monobasic propellant whose flakes — according to the manufacturer — are up to 1.1 millimetres square with a thickness of 0.3 millimetres.

The explosive energy released is given as 4,100 Joule/kg. Much more important for reloaders, however, is the relative burn rate, which determines the intended purpose. According to factory data, with the RS 20 this is more or less on a par with the VIHTAVUORI N340, HODGDON HS 6 or ALLIANT POWER PISTOL.

This makes it universally suitable for handgun cartridges from the 9 mm Luger to the 44 Magnum, except in the case of soft target-shooting loads, or so-called “paper punchers”. 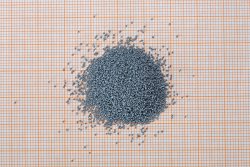 At one burn level lower is the RS 24. This fine-grained, monobasic rod powder with a diameter of approximately 0.5 millimetres and a length of 0.6 millimetres releases an explosive energy of around 4,350 Joule/kg. In terms of burn rate it is comparable to powder types such as VIHTAVUORI 3N38, VECTAN SP2 or ALLIANT BLUE DOT.

It is primarily intended for high-performance handgun cartridges such as the 9 mm “Major”, 9x21, or 38 Super Auto, but is also supposed to be suitable for the .357/.44 Magnum high-volume revolver cartridges.

The RS 30 rounds off the RELOAD SWISS powder range for handgun calibres. According to the manufacturer, this monobasic powder treated with camphor delivers a more balanced temperature with more moderate gas pressures. At 4,000 Joule/kg it delivers the lowest explosion energy, and a grain diameter of around 0.75 millimetres and a length of approximately 1.0 millimetres makes it fairly coarse.

In terms of burn rate, it is among the classic Magnum powders modelled on the VIHTAVUORI N110, HODGDON H110 or the tried-and-tested ALLIANT 2400. Moreover, it is apparently suitable not only for the high-volume revolver cartridges of the .357 Magnum and .44 Magnum type, but also for small rifle cartridges such as the .22 Hornet.

Attentive readers will no doubt have noticed that RELOAD SWISS propellants for handguns still have a gap to fill; i.e. that of a fast powder type for classic target-shooting loads as offered for example by VIHTAVUORI with the N320/330 or HODGDON with the Titegroup/HP 38. Because of their low load volumes, these types of powder are particularly interesting for ambitious reloaders/marksmen from a financial viewpoint as well, while at the same time being distinguished by a low muzzle gas pressure. The Swiss have so far had nothing to offer here, but that is something the new RELOAD SWISS RS 12 will change in the near future. 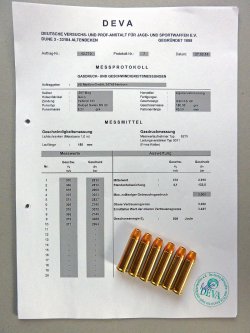 Because reliable load recommendations and load data for handgun cartridges with RELOAD SWISS powder are still thin on the ground, we have taken the matter in hand and done some pioneering work.

The emphasis here, as always, was on maximum practicality, as the precision specifications are based not on just any measuring process and laboratory data, but were determined with popular sporting guns fixed in a Ransom Rest.

Gas pressure measurements were also commissioned from the German experimental and testing institute for hunting and sporting weapons (DEVA) for some custom loads, which we felt obligated to do on behalf of our readers/users for safety reasons when developing new load data, and where some surprising results were obtained. Our main focus was on the three dominant sporting rifle calibres of the 9 mm Luger (including the Major version for IPSC Open Class), .357 Magnum and .45 ACP, with our test series rounded off by custom loads in the .38 Special and 10 mm Auto calibres.

For 9x19, we were able to orientate ourselves by the manufacturer's specifications, which gave us reference points for our own load proposals. In the other calibres our custom load development relied on the aforementioned QuickLOAD program, but true to the motto "Better safe than sorry" we reduced the calculated starting loads a little — just in case. However, at the shooting stand this also resulted in an emotive mixture of joyous anticipation and disappointment in relation to the speeds we were aiming for. It was thus often the case that .38 Special and .45 Auto loads “toppled” far too slowly out of the barrel at an extremely unhurried 160-180 m/s. That then meant unloading the weapon and going back to the loading bench. Quite a few attempts were sometimes needed before the right velocity was achieved.

In spite of this extra effort, our fundamental principle was that it was better to approach the job taking our time, and starting right at the bottom in terms of powder charges, than to put a load together too hastily and have it cause damage to the weapon or even an explosion.  We loaded the 9 mm Luger with bullet weights of 115, 124 and 147 grains so as to represent the whole bandwidth of the handgun cartridges most commonly used for sport.

All the custom loads initially worked out with the Swiss powder RS 20 for Georg Luger's big hit showed no abnormalities, with the exception of the load with a 4.6 grain RS 20 and 147 grain Speer TMJ TC bullet. It was around 130 bar above the permissible gas pressure of 2,350 bar and at this load volume may only be used if the bullet is extended by a further 0.5 millimetres, which is perfectly possible in terms of the weapon's functioning. 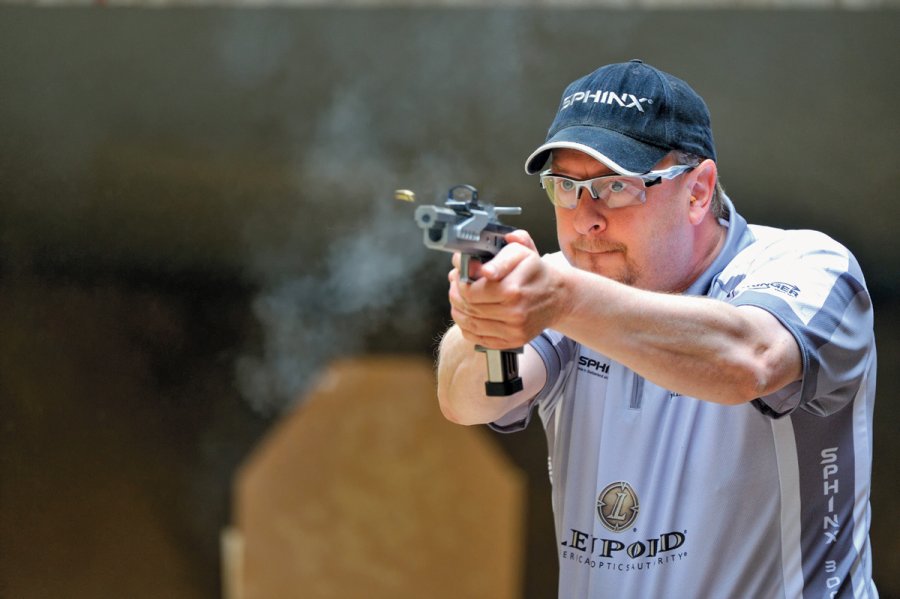 We took our first tentative steps in developing 9x19 Major cartridges with the relatively sluggish RS 24. In a SIG SAUER P226 X-Series Open pistol with a 5.3” (135 mm) barrel length, they created the required “major power factor” of 160 (plus some in reserve). The cartridges were then measured for gas pressure. We were pretty surprised, however, once we had the readings in our hands in black and white. At 3,117 and 3,266 bar, the Major loads were around 750 to 900 bar over the permissible gas pressure, which meant that they should not be used under any circumstances. That burst the bubble of a safe “9 mm Major load” within the permissible gas pressure and overall cartridge length (OAL) according to CIP. Only with cartridge lengths of around 31.0 millimetres would the gas pressure once again be within the permissible range, which not every weapon can cope with in terms of chamber and magazine dimensions. The .38 Special custom load with 6.6 grain RS 20 and 158 grain HORNADY JSP TC projectile would already be in the upper limit range in terms of gas pressure at 1,382 bar (given a highest permissible operational gas pressure of 1,500 bar). 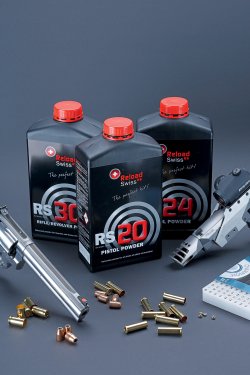 Although the powder load can be increased further, this cartridge may then only be shot from revolvers of the .357 Magnum calibre (with a permitted maximum gas pressure of 3,200 bar). We loaded the .357 Magnum with both the RS 20 and the “Magnum powder” RS 30. As well as the standard bullet weight of 158 grains we also used the 180 grain H&N bullet here, which is particularly recommended for soft-shooting Magnum loads. Only the custom load with 8.8 grain RS 20 and the 158 grain GECO conical hollow-nosed bullet should be regarded as critical in terms of gas pressure due to the large standard deviation of almost 250 bar. In the popular, often reloaded pistol calibre .45 ACP we loaded three different bullet weights.

The lightweight representative was the excellent HORNADY 185 grain SWC, the middle weight range was covered by the 195 grain HAENDLER & NATERMANN HIGH SPEED (HS) SWC projectile, and as a bullet for the classic league of the 230 grain Hardball Service custom loads we chose the economic GECO full jacket round nose. Hand loading with 7.2 grain RS 20 and the GECO 230 grain FMJ-RN again produced a high standard deviation in gas pressure of 117 bar, so that here too the cartridge length should be extended by 0.5 millimetres to 32 millimetres to ease the gas pressure a little more. It goes without saying that every change in a component (bullet, case, primer) will again lead to different gas pressure values. In terms of burn behaviour and residue, RELOAD SWISS seems to be on par with VIHTAVUORI and hence somewhat cleaner than HODGDON or even LOVEX (formerly Accurate Arms).

In conclusion we would like to address the not entirely unimportant and often ultimately critical factor for a purchase decision: the price. 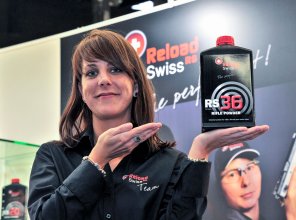 IWA 2016 / RS36 is the new long gun powder from Reload Swiss RS, the Nitrochemie Wimmis AG brand for high-performance propellant powders. It will be presented to the public for the first time at the IWA&Outdoor Classics 2016 in Nuremberg