Despite being plagued by some of Europe's worst limitations to the private possession of firearms, the United Kingdom still enjoys a great hunting tradition and a pretty much active hunters community; most Britons still see hunt as a noble sport, and the Disney-style-nonsense false environmentalism has had little success, by now, in hindering it more than it already is by the Firearms Act, which basically makes owning a hunting gun impossible for anyone who doesn't owns a piece of land where to hunt, de facto taking away the possibility or practicing this sport from most of the Country's urban population.

This said, British hunters are known to be particularly unforgiving, mostly due to the local laws regarding the purchase and possession of ammunition, which forcefully lead to the necessity to “optimize” every single round that's fired (even more since semi-automatic shotguns are banned in the United Kingdom and there is a very little number of licenses for pump-action shotguns around, thus basically over-and-under and side-by-side shotguns are the most widely used hunting guns) − even though the Briton shooters were raised under a somewhat aristocratic view of the hunting sport and thus always demand the best in accuracy and performance; many of them are in fact also clay pidgeon shooters, which leads us to the beginning of our story. 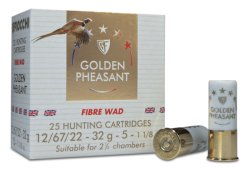 Fiocchi Munizioni S.p.A.
The “Golden Pheasant“ shells are available with either plastic or fibre wad

The British Skeet, Trap and Double Trap shooters have been positively impressed, appearently to the extreme, by the performances of the Fiocchi's “Golden Trap” ammunition. That doesn't surprises us: the “Golden Trap” represents the Italian firm's top offer for shotgun sports shooting, and their quality has found global acknowledgement during a number of international competitions. Many users started to bring the “Golden Trap” ammo along when hunting pheasants, this being the kind of hunt that's more akin to a clay pidgeon shooting session in many ways, and thus the Fiocchi engineers wondered if it wasn't the case to create a dedicated variant of the “Golden Trap” ammunition specifically for hunting use. 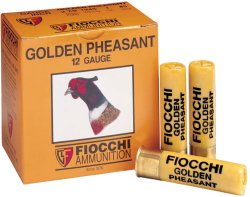 Said ammunition, dubbed the “Golden Pheasant”, has been launched in 2011 in north America and in early 2012 in Europe, and is now being manufactured in the Fiocchi plants located on both sides of the Atlantic Ocean for the distribution on worldwide markets: the Lecco (Italy) main Fiocchi establishment makes the “Golden Pheasant” ammunition for Europe and the rest of the world, while the Fiocchi USA plant in Ozark (MO) manufactures them for the American continent. The “Golden Pheasant” ammo brings the well-known controllability, low-recoil and long-range accuracy of the “Golden Trap” directly to the hunting fields, and is suited for both “English-style” pheasant battue and “Italian-style” hunt (that being, with dogs). 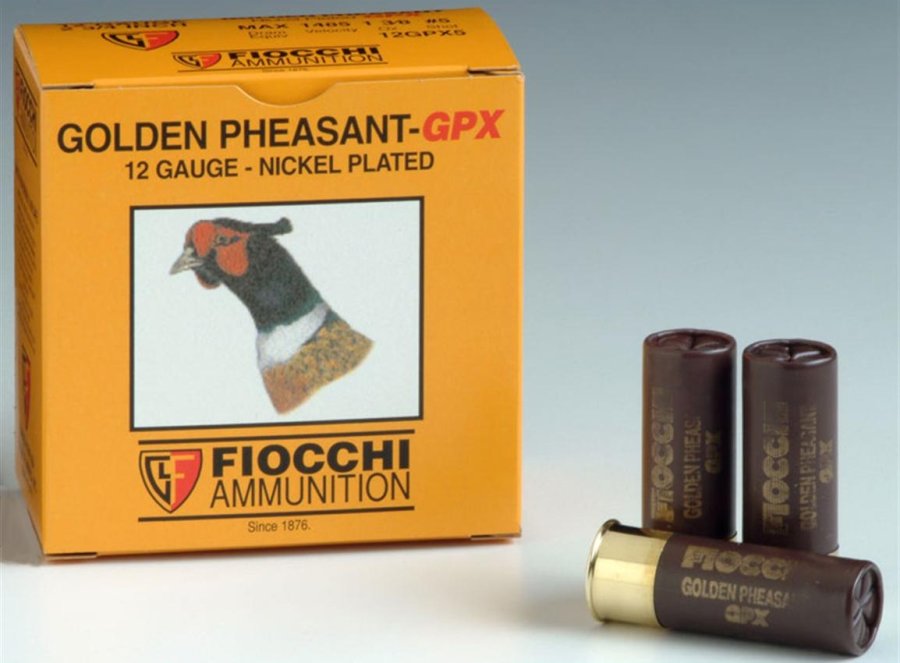 The “Golden Pheasant” ammunition come in boxes containing each twenty-five white, gold-lettered Type-4 shells that will result easier to spot and recover after the shot is fired, so to stimulate a truly more environment-friendly hunting practice. The Fiocchi “Golden Pheasant” shells are 67 mm long, and will fit into the chamber of basically all hunting shotguns on the market; they are loaded with selected 32 g balls, tempered with 2% antimony and propelled through a double semi-progressive Fiocchi FBlu 32 powder base which is in turn primed by a powerful 616 Gold capsule, whose timing will make instinctive fire easier.

The “Golden Pheasant” ammunition is available in two versions: the classic, elegant FB (Fibre Wad) and the more modern PW (Plastic Wad); both are available in the n°5 and n°6 variant, and develop a V400 +/- 2.5 mps muzzle velocity, while the detonation pressure will vary: the Plastic Wad variant will develop up to 620 Bar in pressure, which will rise up to 680 Bar in the Fibre Wad variant. 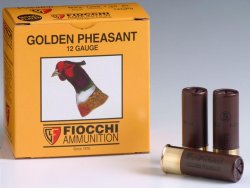 The “Golden Pheasant” ammunition as manufactured in the United States varies cosmetically but not in performance: they come in a more classic-style, orange box, and in brown or yellow shells with black or golden markings, loaded with standard or nickel-plated balls. In Europe, the “Golden Pheasant” ammunition is available only in 12-gauge, while in the U.S. they are also available in 16-gauge (featuring a blue plastic shell), 20-gauge and 28-gauge (in  a red plastic shell).